One cold January morning, seven TKO crew leaders and assistant crew leaders met at Punchbowl Falls County Park in the upper Hood River Valley. Our mission: to scope out a possible route for a trail along the East Fork of the Hood River. I’d hiked those slopes several times before and had found intimidating conditions: The slopes are steep and brushy, with way too many boulders. I thought this trip would be a unique opportunity to learn from each other about designing new trail in tough terrain. We don’t get to do that very often.

On this scoping hike, we scrambled about to identify alternate routes and trouble spots. In addition, each of us jotted estimates of how much time we thought it would take to build the trail, and what proportion of time each task would take. I may have promised a beer to the person whose predictions were closest to the actual accounting. 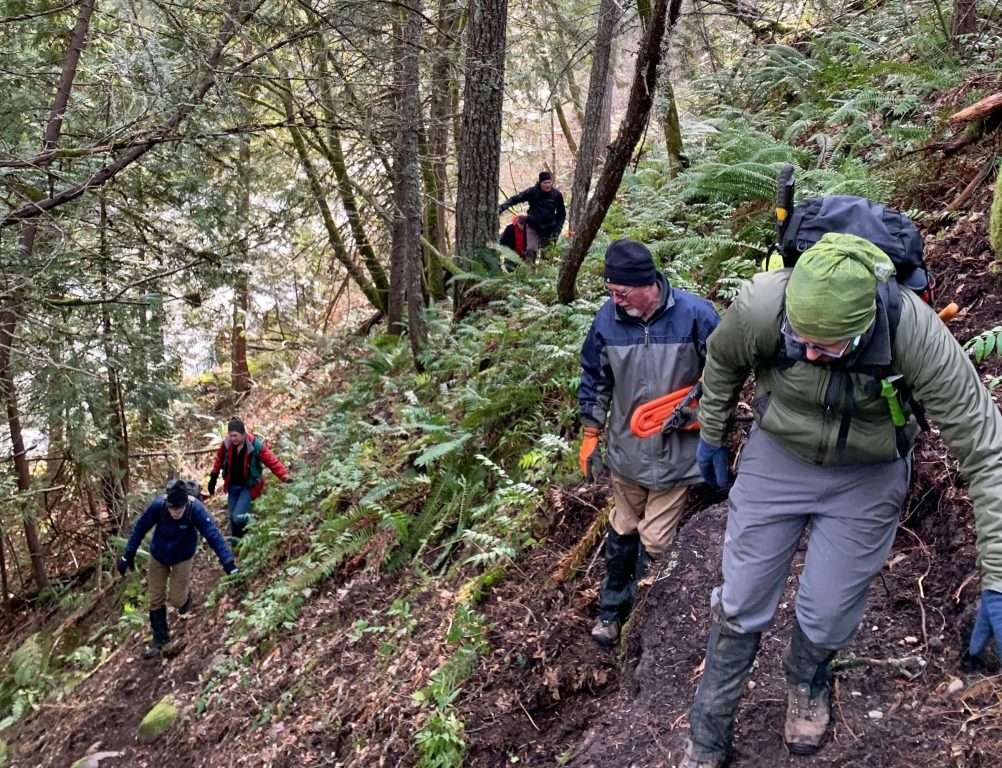 Searching for a trail route of least resistance across a very steep slope. (Photo by Chip Andrus)

Our first trail construction work party was held in late March, even before all the snow had melted at the park. For four months, scores of volunteers, ranging from long-distance trail runners to recent retirees, forged a trail along the river. After a final push to finish the trail in early July, I was able to evaluate our predictive prowess—and, more importantly, process what it takes to build new trail in such challenging terrain.

The resulting trail was 1,635 feet long and not a foot of it was easy to build. Even construction of the first 500 feet of trail meandering along a flat area was frustrated by bales of duff, truckloads of rock, and miles of roots to move. I felt like a bully reminding the volunteers that if we didn’t dig down deep enough, we’d end up with a spongy, lumpy deer path, choked with sprouting brush. Throughout the project, we rarely got away with excavating less than a foot and a half of organic matter and surface rock in order to reach mineral soil. This was a hard reality for some volunteers, since much of the time they were just cutting brush, excavating duff, and wrenching out roots—difficult and frustrating tasks. 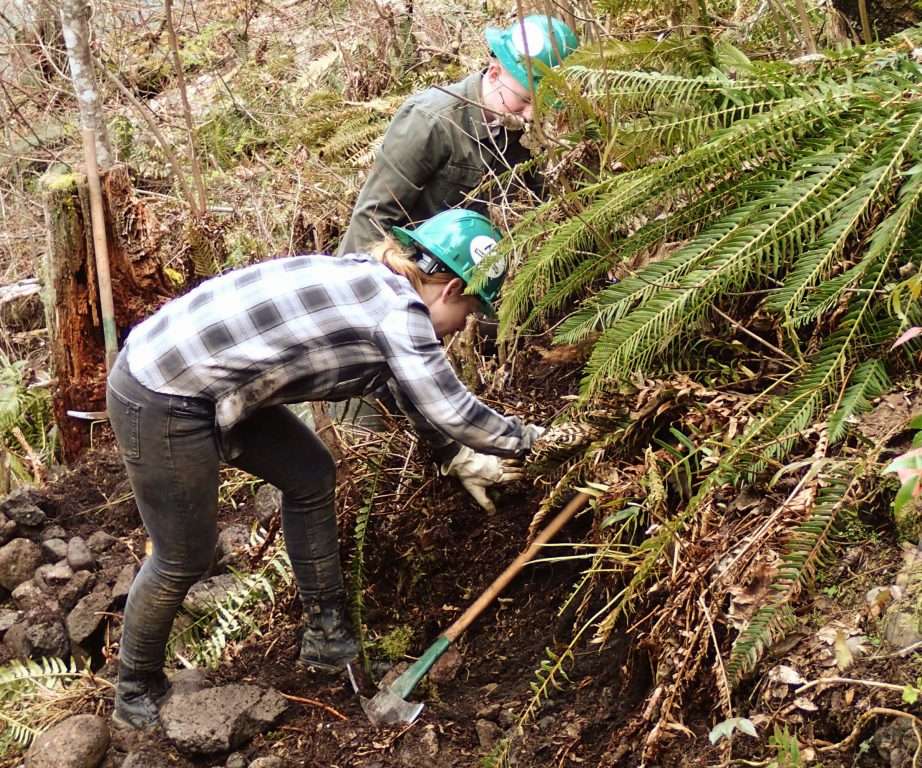 The less glamorous aspects of trail construction—cutting brush and grubbing out duff and roots. (Photo by Chip Andrus)

After the flat area came the perplexing part—how to drop from the upper plateau down to river level. The solution turned out to be a steep boulder staircase across the precipitous side slope. While searching for yet another large rock just uphill of the last one we planted, we relied on gravity; the large rocks needed for this effort had to originate uphill because without gravity working in our favor they just wouldn’t budge. Unfortunately, gravity sometimes was not our friend, as when a rock we were so carefully easing into place slipped away and plunged into the river! Handling rounded rocks can be precarious. 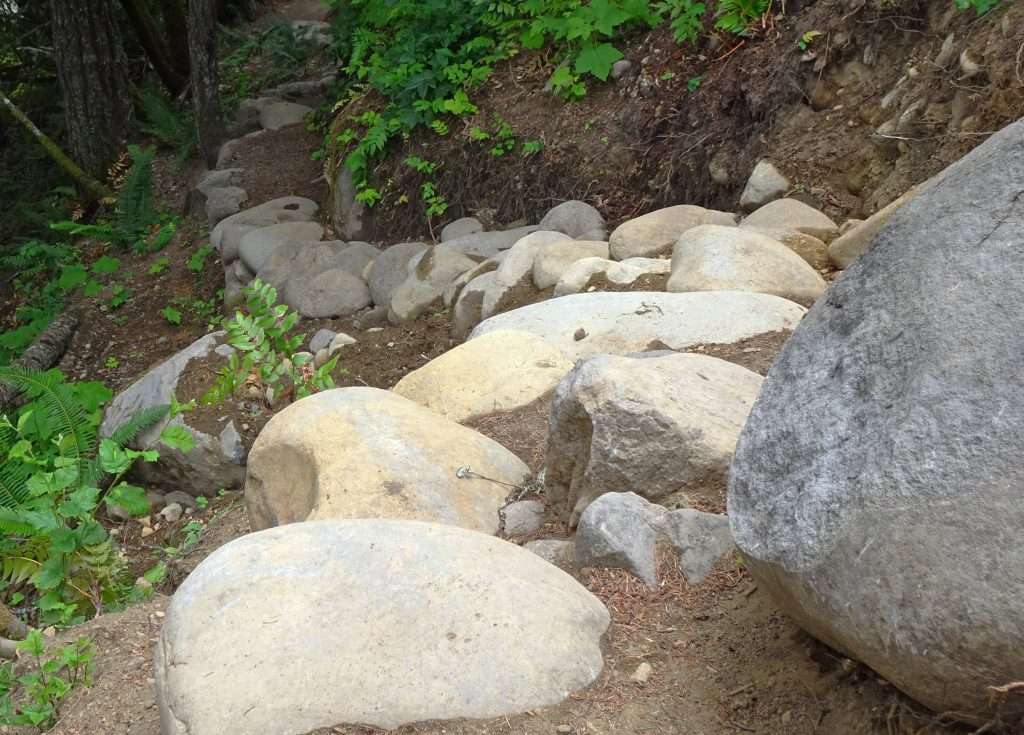 A staircase of rounded boulders transported by glacier. (Photo by Chip Andrus)

The staircase is steep, but it did turn out to be stable. And maybe kind of elegant. You just won’t find the design in any trail manual. That 200-foot staircase took up a good chunk of time. To be honest, none of us were experienced working with these potato-shaped boulders. We learned as we went. In contrast to angular rock, the secret turned out to be not letting the potatoes touch each other much.

Beyond the boulder staircase, the trail’s steep side slopes along the river often required that we buttress the trail’s outer edge with boulders in order to get adequate trail width. That buttressing continued for much of the trail length and became a major time sink. Moving boulders around and getting them bedded down into real soil and not wobbling around on top of duff required patience, muscle, and diligence. 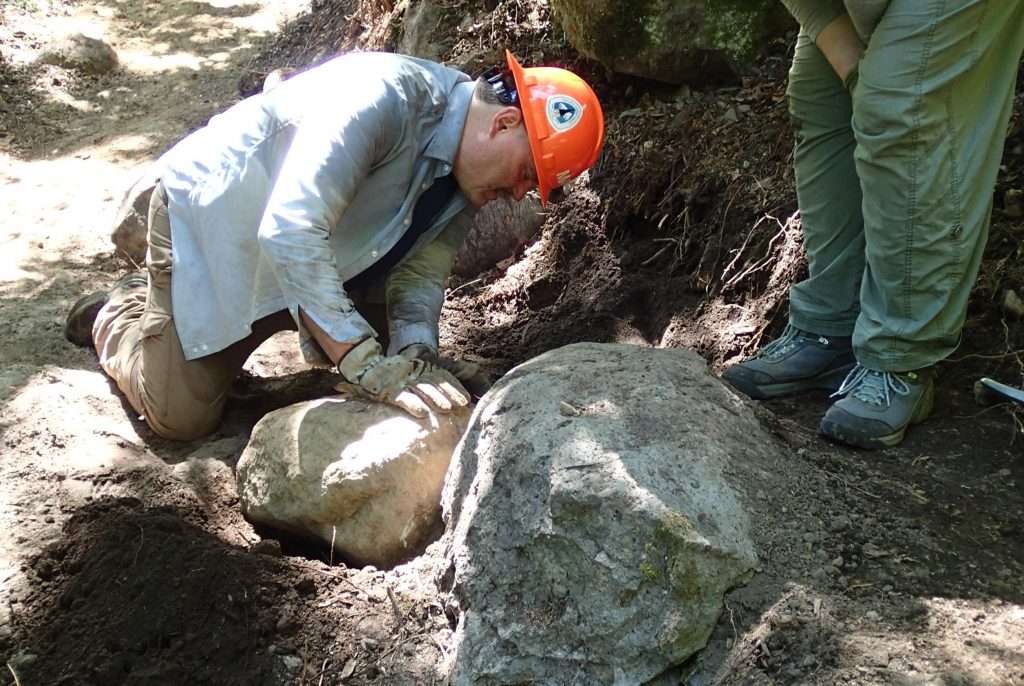 Creating a stable bed for a boulder that buttresses the outer edge of trail. (Photo by Chip Andrus)

The trail did provide short sections of creative rock work that relieved the tedium, as well as some log cutting. In some areas, volunteers struggled to saw jumbles of decaying maples wrapped in blackberry vines. In contrast, other areas had Douglas fir logs not enveloped in brush and at a comfortable height above the ground that allowed for easy sawing. Overall though, cutting 24 logs took very little time compared to other tasks. 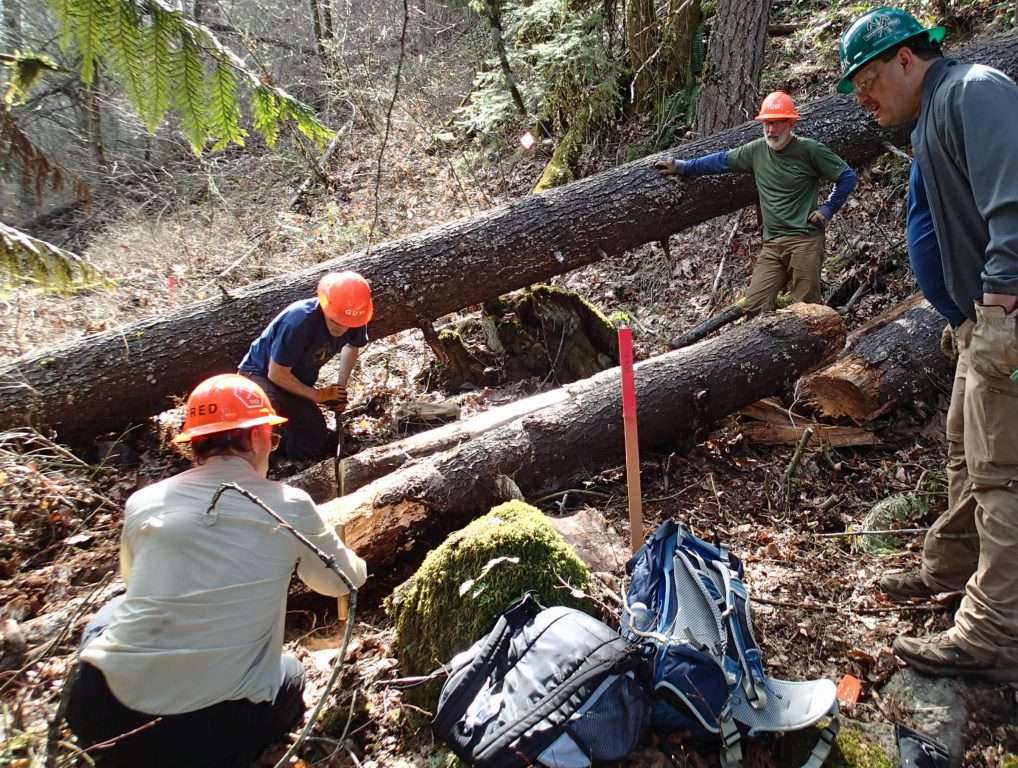 One twist I wasn’t expecting was the need to conserve and gather up soil for the trail surface. The soil along the East Fork of Hood River is a silty, sandy loam that makes for a great trail surface. The problem is that once you excavate the rocks, there isn’t much soil to use. We developed a technique for conserving any dug-up soil and drifting it back onto the piece of trail that we’d just built. We couldn’t just toss it over the side and waste it. Sometimes we ended up using buckets to bring in more soil. Overall, putting soil on the trail surface took more attention to detail than in soil-rich areas. 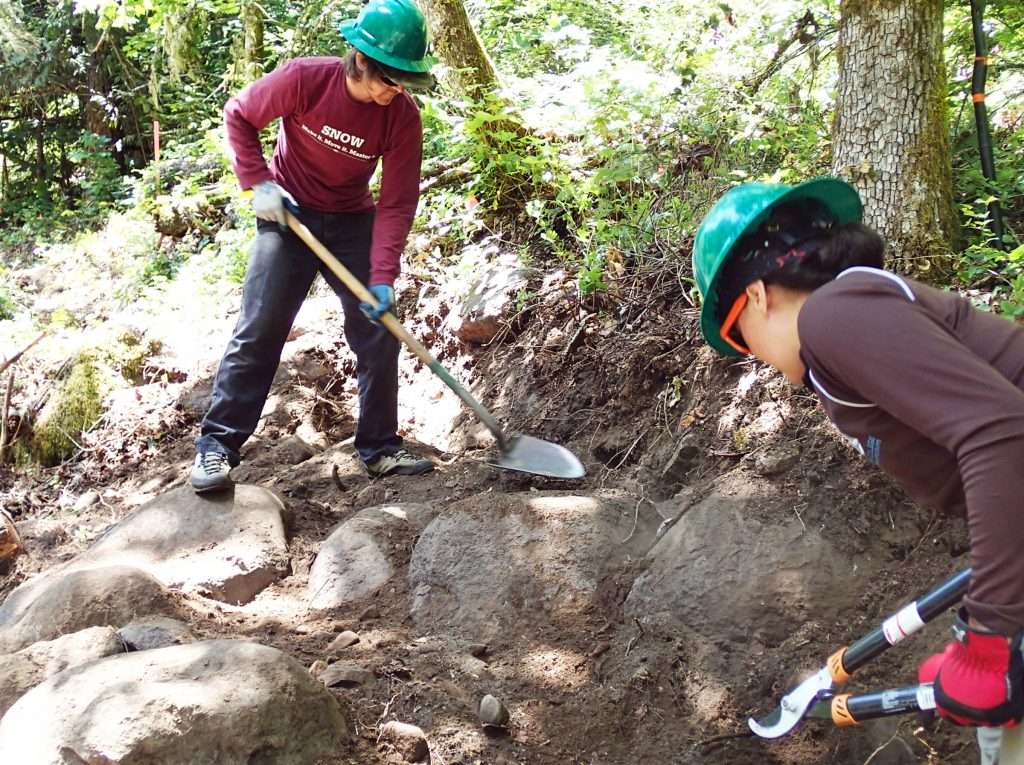 Stockpiling soil to later fill in the gaps between boulders. (Photo by Chip Andrus)

I kept track of the total hours spent working on the trail, but can only estimate the percentage on each task. The time by task, compared with the group’s predictions in January:

The group predicted that a majority of the effort (60%) would go towards three tasks: removing roots and duff, excavating soil and rock, and surface finishing. After the trail was completed in July, it appears that actually the majority of the effort (64%) went towards removing roots and duff and two other tasks: armoring the outer tread with boulders, and constructing rock steps and walls. The differences were all about what was below the surface—the brush and duff layer had obscured the challenging site conditions (trail stability, slope steepness, and boulder infestation) and caused us to underestimate the time to complete tasks resolving those issues.

How many hours did it take to build the trail? Since I logged every trail worker’s hours, we have exact numbers. I had tasked the group to estimate how many work party days it would take to finish the trail, assuming a 12-person crew. Since we never had a full crew on our work parties, I converted the time to person-hours: A crew of six working seven hours would be 42 person-hours, for example. The actual time to complete the 1,635 feet of trail was 731 person-hours. That’s 2.1 feet per hour, which seems glacial. But compared to the average of 2,226 hours that the group predicted, it was flying—the
median number of hours which the group predicted was three times the actual! (We would make lousy general contractors if we were in the housing business, bidding on a job.) The group’s predicted total of hours ranged from a low of 924 to a high of 2,940. Rich had the prediction closest to the 731 actual hours, so I owe him a beer. 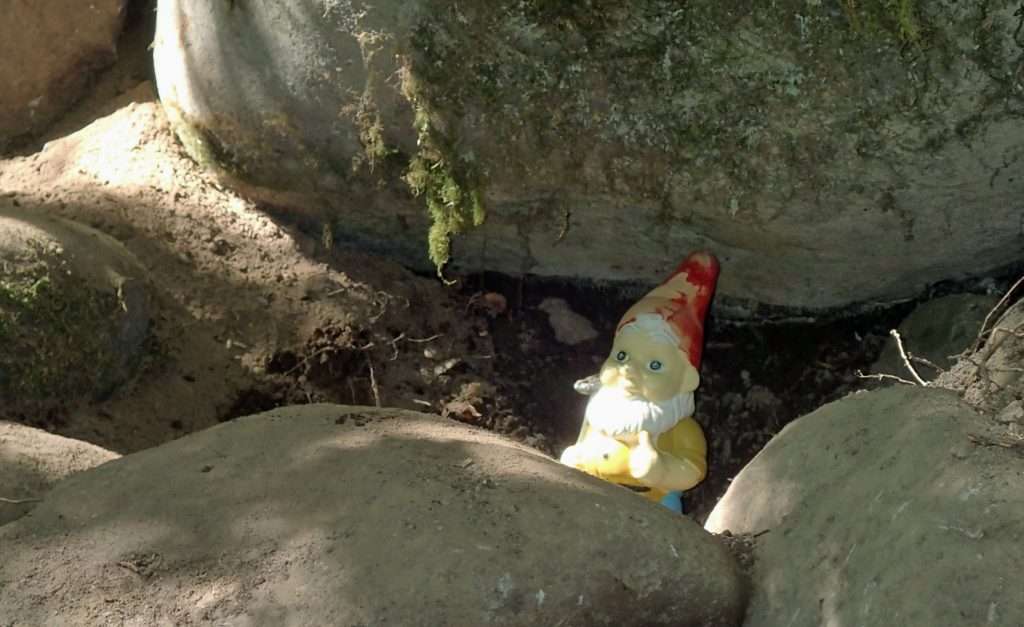 Some of the things learned from this project: