Working on Trails in the Eagle Cap Wilderness

Here we are, six volunteers with TKO, in August, trying to bring a neglected trail back to life. Built by a miner over a century ago, the Falls Creek Trail #1753 twists up the steep slopes of a canyon in the Eagle Cap Wilderness and leads to a mine shaft 3,000 feet above Hurricane Creek.

The trail alignment suggests that the miner had a strong, sure-footed mule—it’s steep and perilously narrow at spots. Now it’s used mainly by hikers. This trail accesses some of the most beautiful terrain in the wilderness and is also the portal to Legore Lake, Oregon’s highest. It is still passable but time has not been kind to this minimally maintained trail. 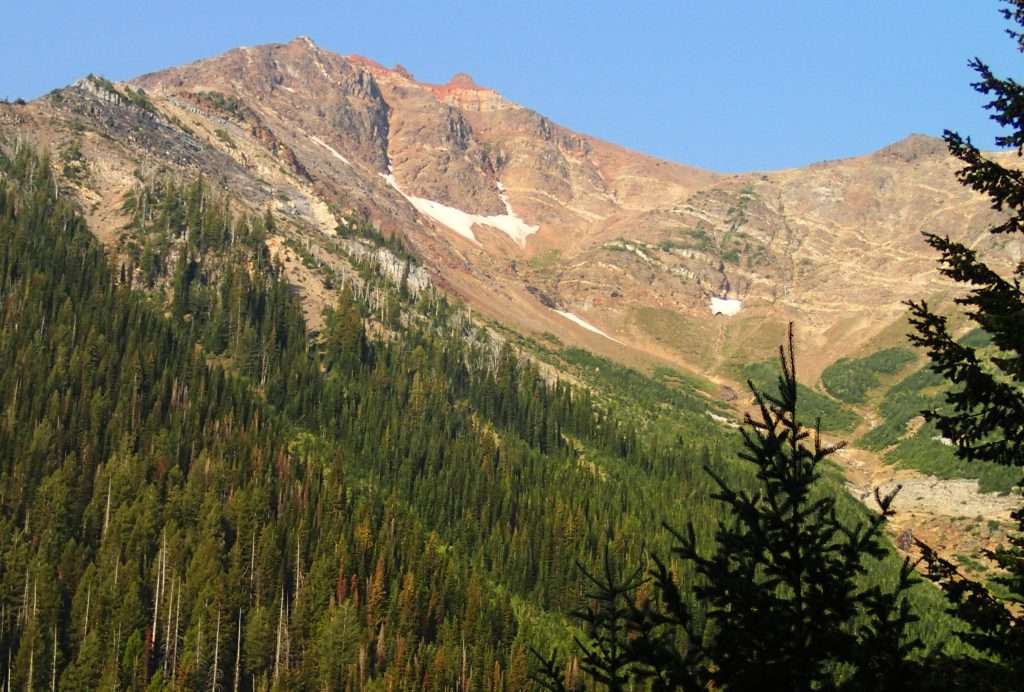 Members of the local volunteer trail group, the Wallowa Mountains Hells Canyon Trail Association, have promised to add some of their muscle toward our effort. They help keep trails open in the area, mostly by cutting out trees that have fallen across the trail. This is vital for the future of trails in an age of an under-funded US Forest Service.

Our aim is to apply first aid to the most damaged reaches from the trailhead to the halfway point (about 1.5 miles). This includes widening the trail where it is extremely narrow, rebuilding the trail at its original location where the tread has substantially migrated downhill, adding features for water to drain, and cutting encroaching brush. To top it off, we’ll remedy the trail’s traversing a hillside swamp so that hikers won’t have to wade through shin-deep muck.

The narrowest of trail sections occur where the side slope is steepest and hemmed in by bedrock. Excavating deeper and further into the bank doesn’t buy much width, so we bury large boulders on the outer trail edges, thereby adding width and a hard outer surface to resist sloughing. This may add only a foot of trail width, but it is enough to fix the problem. 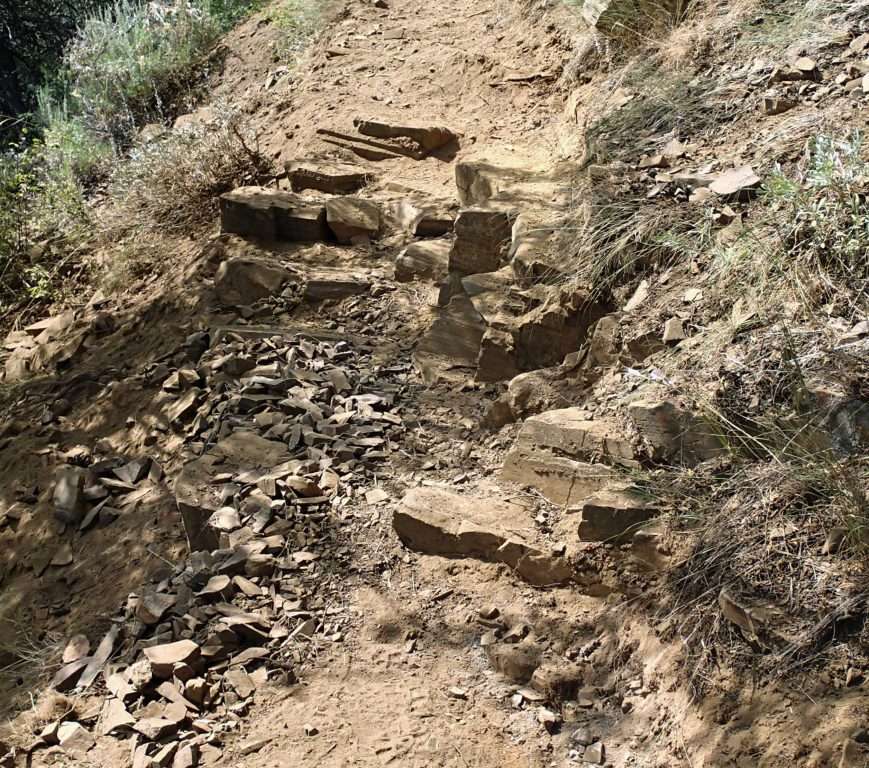 Large boulders, firmly bedded on the outside edge of the trail, provide extra width and stability. (Photo by Chip Andrus)

Rebuilding the tread at its original location requires assaulting dense vegetation and roots that have caused the downhill tread migration. Encroaching brush on the uphill side of the trail compels hikers to walk off the trail on its downhill side. Eventually the tread is nothing but roots and other organic debris angled on a steep slope, often 20 feet downhill of its original location. Cutting the dense brush and excavating roots and dirt to form a new trail prism—that is, a new trail corridor—keeps us sweaty, dust-encrusted, and sore. 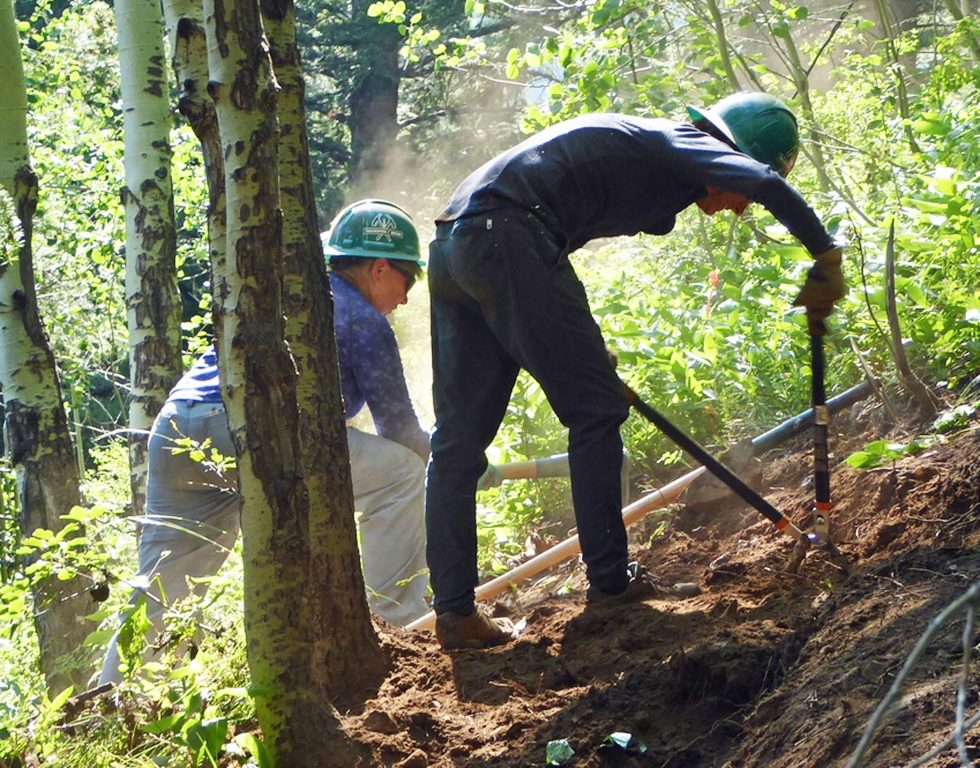 Trail tread that has migrated downhill over time requires extensive brushing and excavation to reestablish it at its original location. (Photo by Chip Andrus)

The trail crosses a sodden hillside and we pool our wits to come up with an alternative to hikers having to wade through muck for 60 feet. Before a tree five feet in diameter toppled a few years ago, the trail bypassed the swamp. The steep terrain, precarious lay of the tree bole, and the tree’s size dissuaded anyone from cutting out a section of the log where the trail traversed the hillside. The trail simply moved uphill. But that has put the trail in the middle of a swamp that fills the boots of early season hikers with water and mud.

Our solution is to excavate muck on the most uphill side of the swamp, dig into the steep hillside until we find firm mineral soil, provide some drainage for the prodigious springs that feed water into the swamp, and construct a causeway of boulders to form a trail. 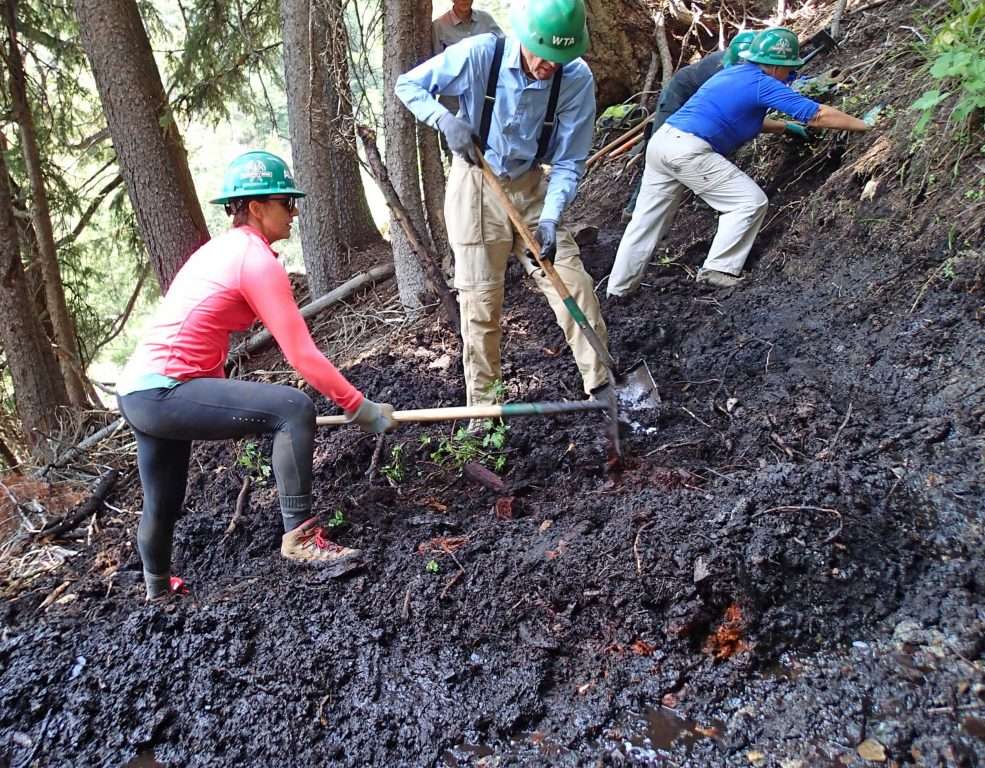 Removal of the deep muck in order to reach mineral soil is the first step in building a rock causeway across this swampy reach of trail. (Photo by Chip Andrus)

The muck turns out much deeper than we had imagined. We pull up old cedar logs that have been preserved in the oxygen-deprived mud. We dig deep and into the hillside until we find mineral soil. We build rock culverts to guide the spring water into discrete pathways. We haul large boulders to form a base and then add smaller rock, making a trail surface firmly anchored and out of reach of the water and mud. 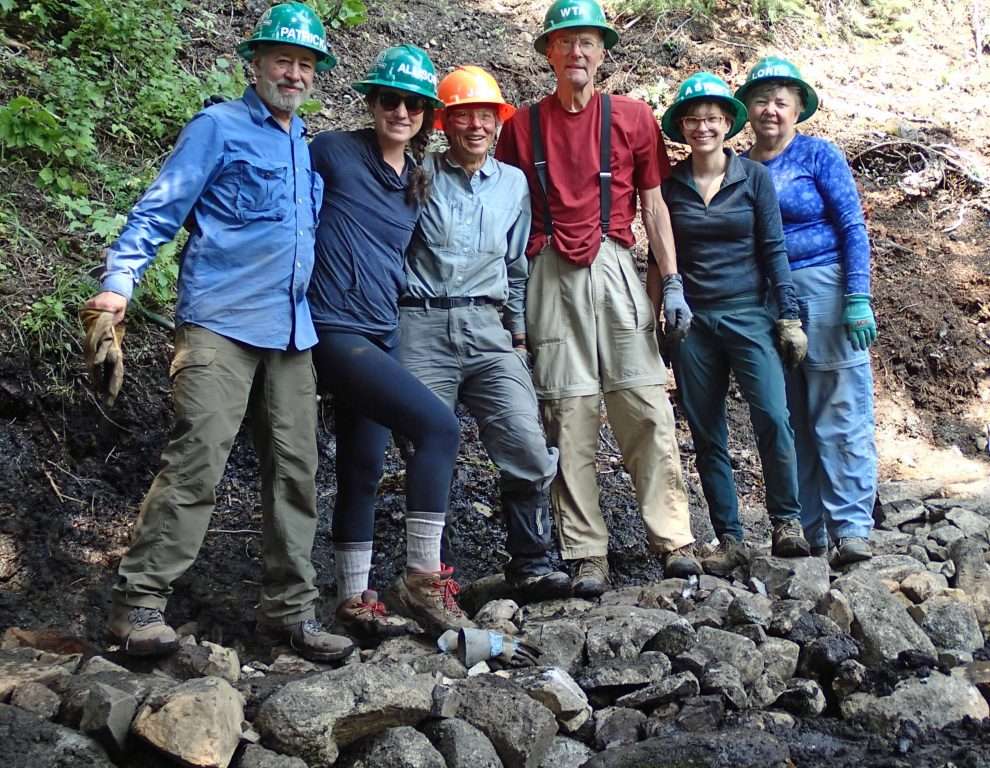 The rock causeway is constructed of large boulders at the bottom and smaller rock to fill in the gaps and create a smooth tread. Rock culverts allow water seeping from the hillside to move underneath the causeway. (Photo by Chip Andrus)

With our day only partly over, we take a break and walk the remaining half of the trail, past the old miner’s cabin, past the mine shaft, and uphill further to a high meadow where we find snow and flowers. We ponder whether this second half of the trail, with its steep and severely degraded tread, might become a project for next summer.

Two weeks later, our TKO volunteer crew enters the Eagle Cap Wilderness, this time on Maxwell Lake Trail #1674, which climbs steadily out of the Lostine River valley and terminates at an alpine lake surrounded by granite spires.

But unlike the Falls Creek Trail, horses and mules also use this route and the stock use requires some adjustments in our tactics. Stock require a wider trail than hikers, as well as a wider corridor cleared of branches and brush. Turns can’t be too tight and stock are prone to tripping if rock drainage structures project too abruptly out of the trail.

The first half of the trail turns out to be mild-mannered with a moderate grade and well-designed switchbacks. Here, we widen a few sections by planting boulders firmly on the outside edge of the trail and then we move on. 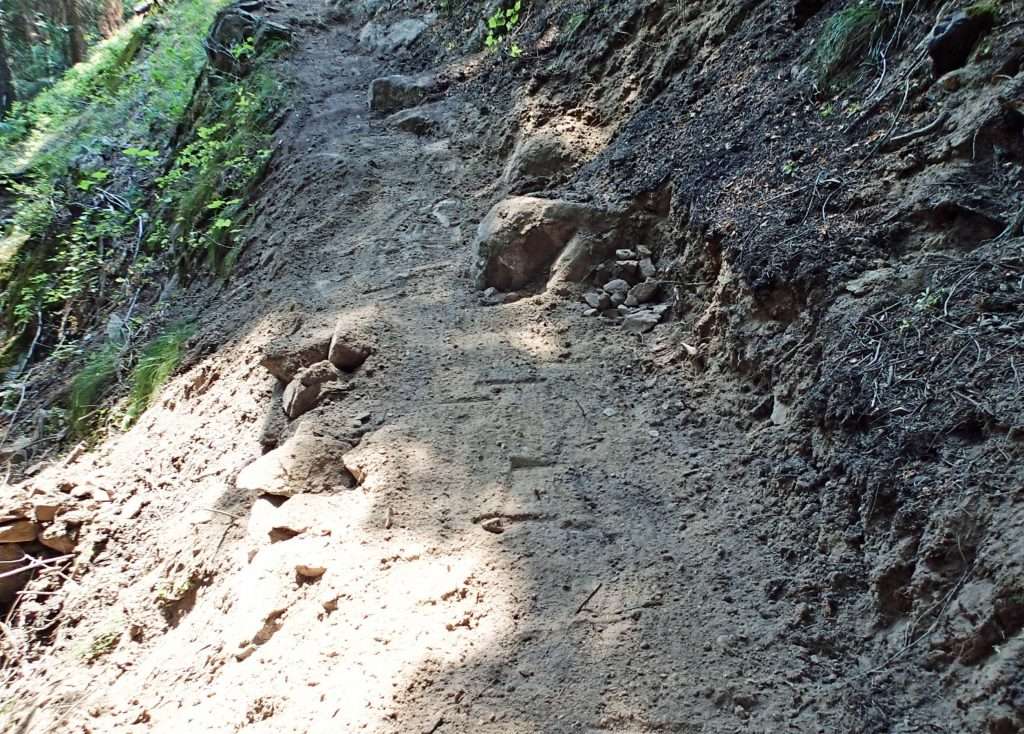 Boulders buried on the outside edge of the trail create a wider and more stable tread. (Photo by Chip Andrus)

At the halfway point the trail goes off its meds. From here to the lake it climbs steeply with little thought to switchbacks or water drainage. Some sections are deeply entrenched and have multiple paths. Furthermore, we are now in terrain where avalanches periodically barrel down the slope to take out sections of trail. We wonder if we can really help this trail.

We first concentrate on adding length to the trail, thereby decreasing its gradient and allowing more opportunities for water drainage. We thoroughly brush out the outside of small bends and create a smooth tread on the outside edge of the curve. Using logs and boulders, we decommission other threads of the trail that go straight up the hill. This will compel hikers and stock to drift to the outside of bends. These aren’t proper switchbacks but it does help make the trail more navigable. Adding switchbacks would require construction of much new trail. Where the trail isn’t hopelessly entrenched, we add drainage features anchored by large boulders to divert water off the trail. 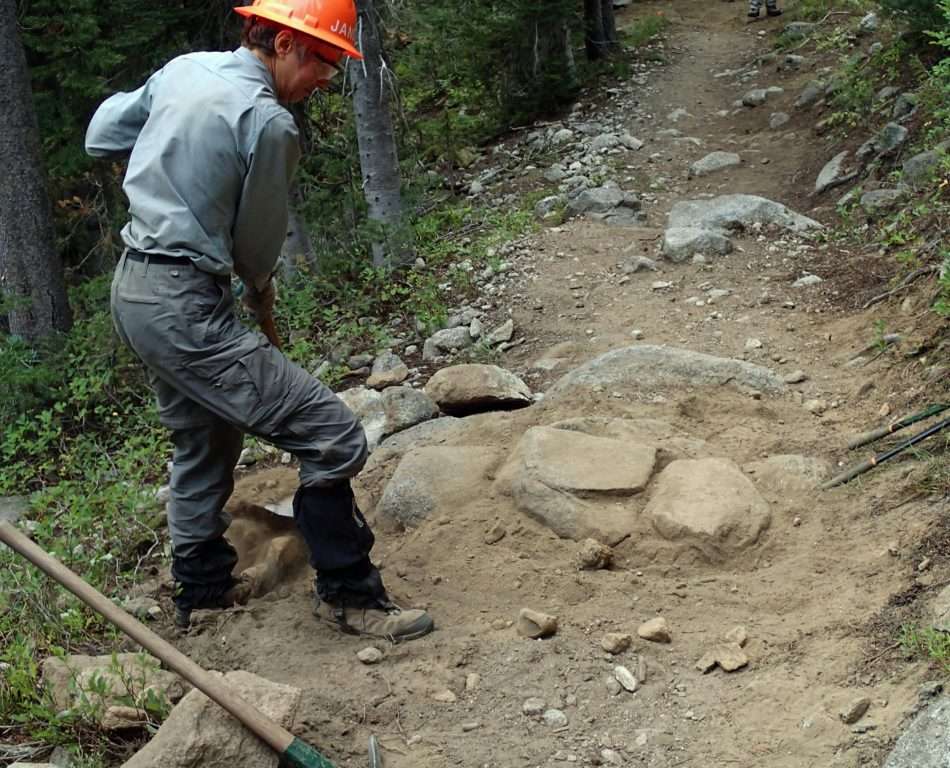 A drainage feature on a steep trail that is used by stock requires a substantial boulder berm on the downhill side to be stable. (Photo by Chip Andrus)

After the first day we decide that the hike into and out of our work area consumes too much of our energy so we load backpacks in the morning to head into the high country. A flat area at the edge of a meadow, complete with a stream, becomes our camp for three nights.

Up the trail, we reach a steep, narrow section entrenched six feet deep, nearly impassible for loaded stock. We build a section of new trail as a bypass (with a proper switchback) and decommission the trench by tossing boulders and logs into the abyss.

Further uphill we are firmly in avalanche territory where drainage structures need to be built with the largest of boulders we can move to ensure that they last. 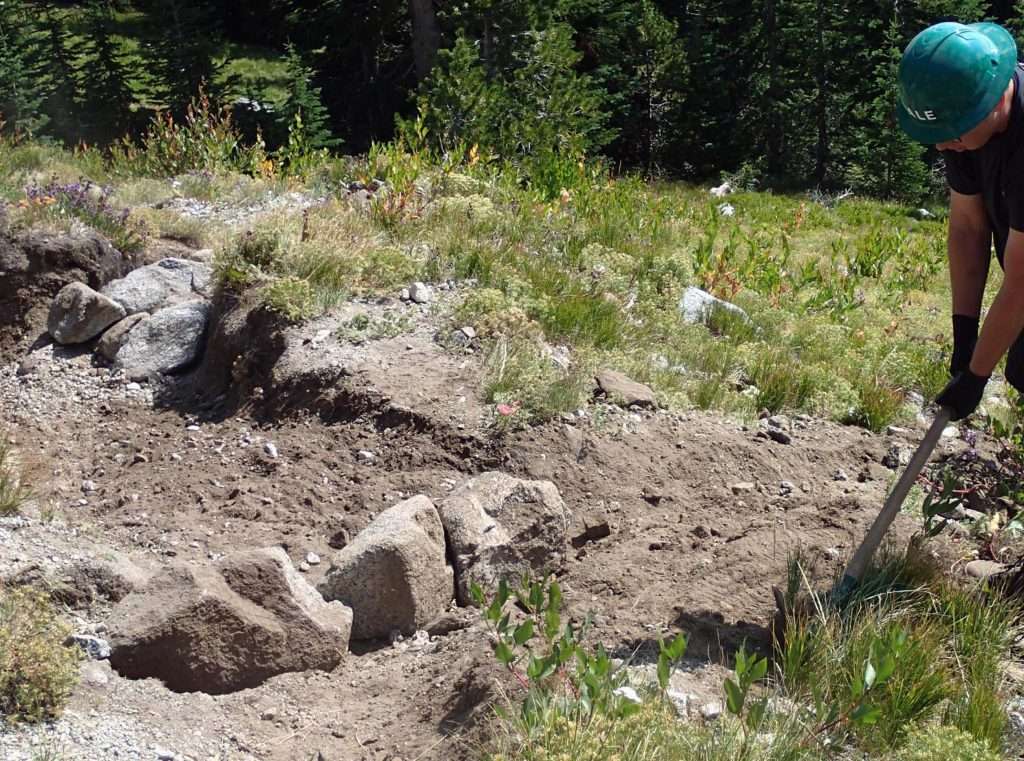 Only the largest boulders are used to construct a drainage feature where snow avalanches occasionally pummel the trail. (Photo by Chip Andrus)

Snowmelt and heavy rains will still continue to flow down some entrenched sections of the trail but we build structures to drain water off the trail wherever possible.

Finally, we’re at the lake. With the afternoon unaccounted for, we search the open landscape for late August flowers and hidden ponds. We retreat back to the car campground and find a much better choice of food and drink.

The final day we move down the Lostine River and find the start of the Bowman Trail #1651, another route into the high country on the west side of the Lostine Valley. This trail gets more stock use and is sufficiently wide with a moderate gradient, but its drainage structures are filled with sediment and overgrown with vegetation. The trail also needs additional drainage features or outsloping in certain reaches to keep the water from flowing down the trail.

From the trailhead to Bowman Creek Falls we excavate the drainage features. The existing drainage features are old school, consisting of a small log and uphill trench that angles downhill at about 45 degrees. They readily fill in with soil and the barkless buckskin logs when wet can be a slipping hazard for stock and hikers. A new trail today would instead be built with short sections of reverse grade to guide water off of the trail. The new structures we add have that reverse grade. We widen and deepen uphill portions of the existing structures to make them less prone to fill with sediment. 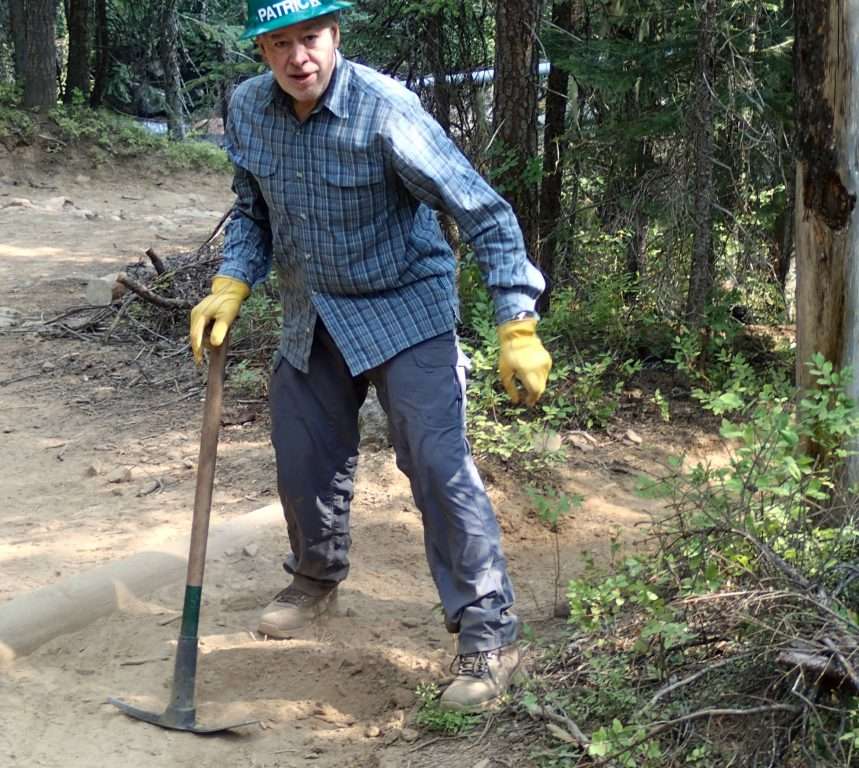 Back at camp we discuss where to work next year. Yes, I’m sure we will be back again next August to work on trails in this amazing wilderness. We’re always looking for volunteers to join us!