Walking with the Birds: Winter at Oaks Bottom

With a fluttering rush of wings, the western screech owl shot from its roost in the cleft of a limb and, dodging between branches in the ashen light, landed inside a tangled thicket. 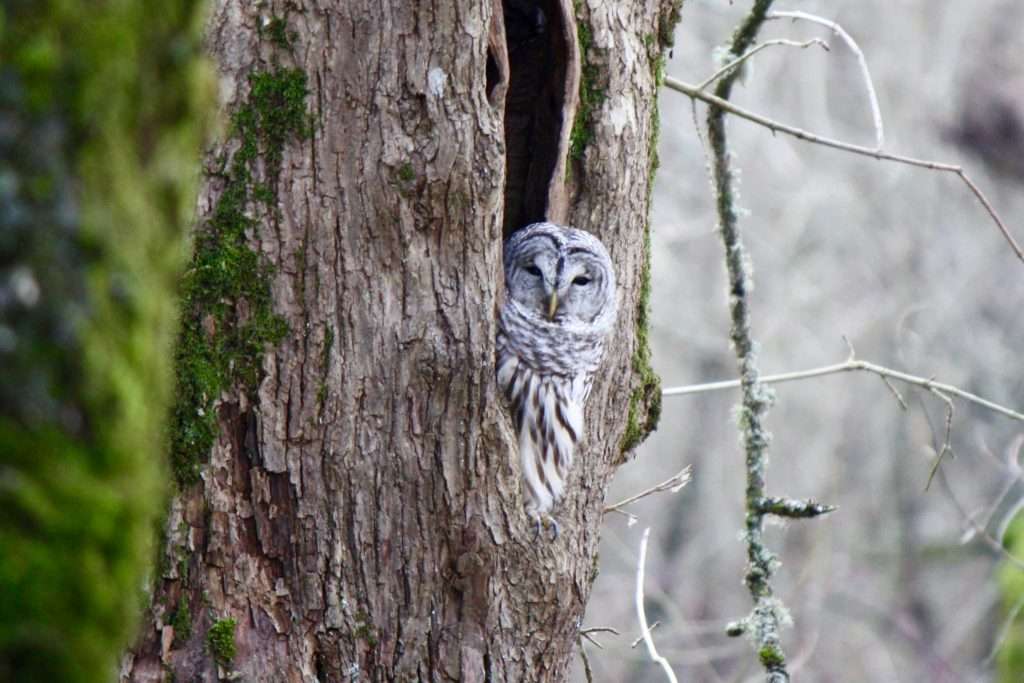 A barred owl peers sleepily from a hollow tree at Oaks Bottom. (Photo by Ezra Cohen)

Owls are one of the many avian treasures Oaks Bottom Wildlife Refuge has to offer, making it a prime birding spot close to Portland. The city first acquired acreage here in 1959, with additional land added in 1969 to prevent its development as an industrial area. By 1970 the city had made plans to put in museums and a motocross course, but mounting pressure from Portland Audubon caused the city to reconsider. After much debate, Oaks Bottom was named Portland’s first wildlife refuge in 1988 and, in 2004, it became the city’s first migratory bird park. The diversity of birds at Oaks Bottom is truly large and includes sparrows, raptors, finches, waterfowl, waders and shorebirds. Birdwatching in winter can seem cold or dull, but Oaks Bottom harbors many wintering birds and a winter trip here can yield hundreds of ducks of up to 12 species, six species of sparrows, great blue herons wading in the lake, and bald eagles soaring over the river. The birds at this urban yet wild-feeling refuge are rewarding any time of the year, but after the geese have moved south, this is the place to be. 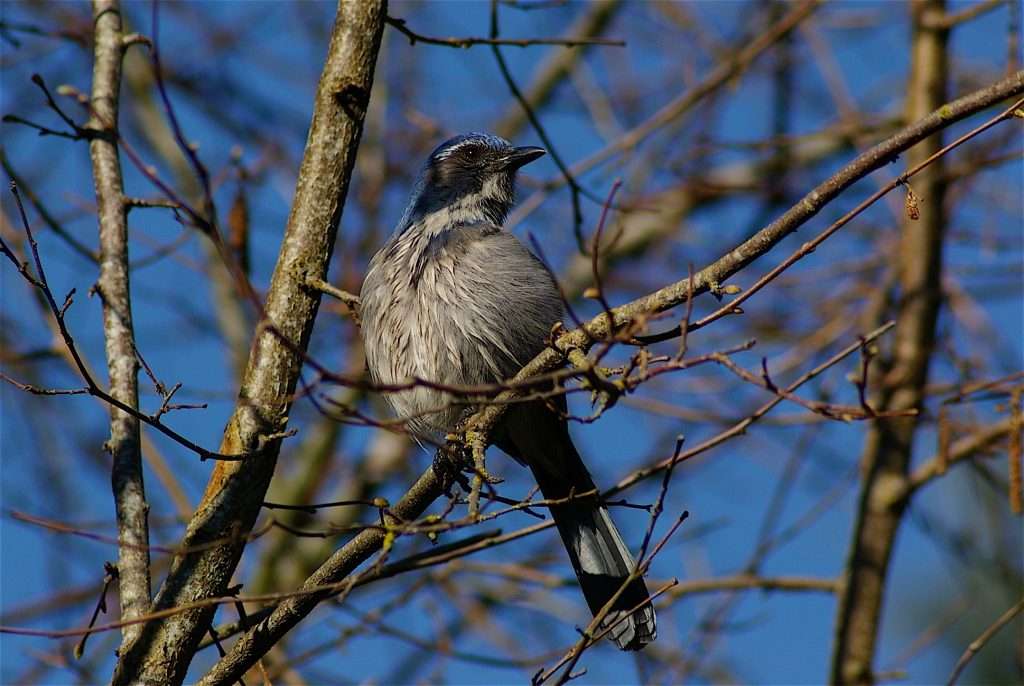 A California scrub jay basking in the winter sun. (Photo by John Sparks)

A flickery flash of blue against the grey sky and a rust-tinged breast. The western bluebird drops to the ground catching an invisible bug. This bird demonstrates the beauty of the South Meadow at Oaks Bottom, where long hours of searching may produce an elusive prize. Late winter brings an especially interesting variety of birds to this part of the refuge, including the Say’s phoebes and the aforementioned western bluebirds returning from their wintering grounds. Western meadowlarks are another pleasant surprise to find hunkering in the grasses or flushing with white outer tail feathers spread wide. If these birds don’t happen to be eagerly awaiting a viewer’s arrival, many others call the South Meadow home. California scrub jays perch on the utility poles, fox and golden-crowned sparrows call or sing from the blackberry brambles, and mixed flocks of lesser and American goldfinches roam the meadow feeding on thistles or stray seeds. Be sure to look up so as not to miss the frequent flyovers of a red-tailed hawk and the occasional bald eagle soaring effortlessly on long wings. 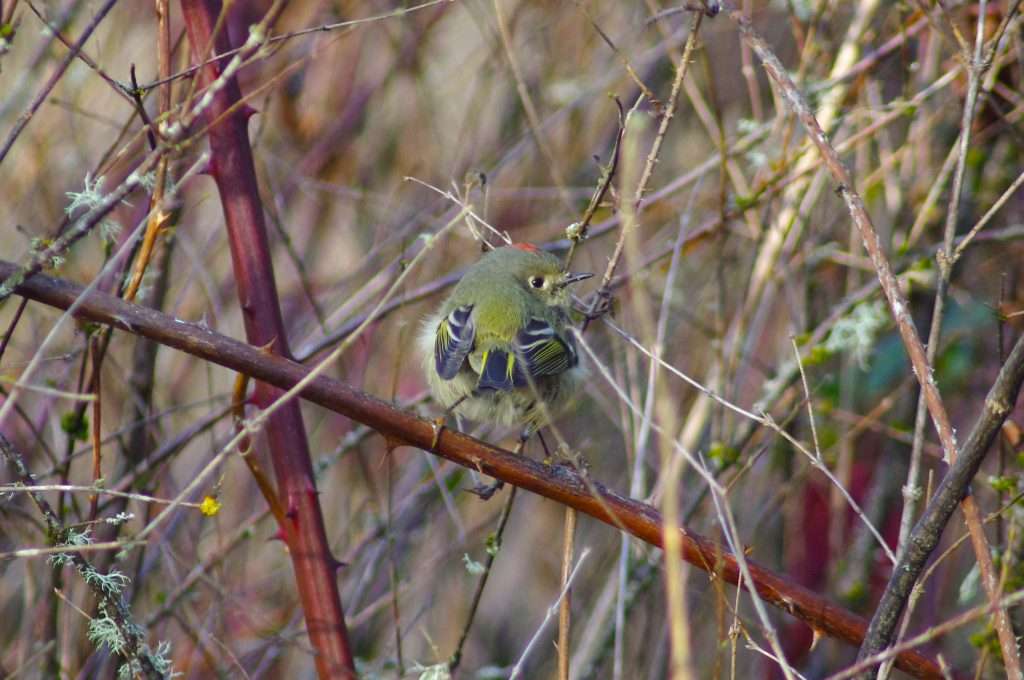 The viewing platform about half a mile from the South Meadow overlooking the lake at Oaks Bottom is unique as it offers a chance to see both waterfowl and songbirds from one location. Looking into the channel with its encroaching purple loosestrife, viewers will likely see ring-necked ducks (with the clear rings on their bills!) diving to the muddy bottom, or a pair of serene gadwalls cruising around and gently tipping on end to munch on aquatic plants. Look down to the left for a chance to glimpse vibrantly colored wood ducks hiding in the brushy verge and off to the right see hooded mergansers feeding under overhanging branches. While the ducks swim below, listen for the harsh “tacking” of a ruby-crowned kinglet. One of the best places to see the bright red crown of these perky birds is to look down on one foraging amidst the branches below the platform. All the while listen and look for black-capped chickadees, Bewick’s wrens, and brown creepers in the large cottonwoods overhead, and for tiny buffleheads with puffy black and white caps or groups of northern shovelers spinning frenziedly in the water. 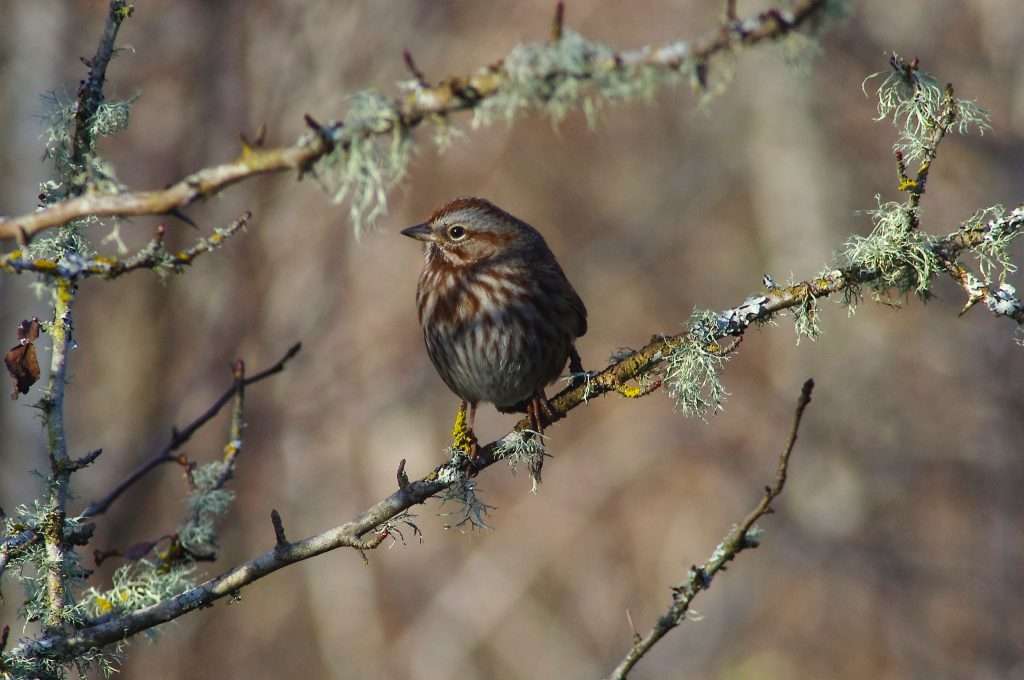 The culvert area at the north end is the newest of Oaks Bottom’s birding areas and is home to perhaps the greatest diversity of avian species.The culvert and connected channel were created in the summer of 2018 so as to allow migrating salmon and other fish to have a safe haven in the refuge. Although the effects on fish are still unknown, the scrubby fields adjacent to the channel have already invited large numbers of birds. Sparrows dominate. As many as five species can be found, including song, fox, Lincoln’s and white-crowned, as well as noisy, chattering dark-eyed juncos. Look for these in the brush piles or flitting low over the grass. On the edges hide spotted towhees sporting a red breast and gathering food with their unique jump-forward, scratch backward motion.The snags overhanging the water offer excellent perches for great blue herons and belted kingfishers. The latter can be frequently heard rattling away or coursing low over the main lake. Check the snags projecting from the reedgrass for a Cooper’s hawk or the occasional merlin. This area sometimes holds rare birds, including a clay-colored or a chipping sparrow and black phoebes. 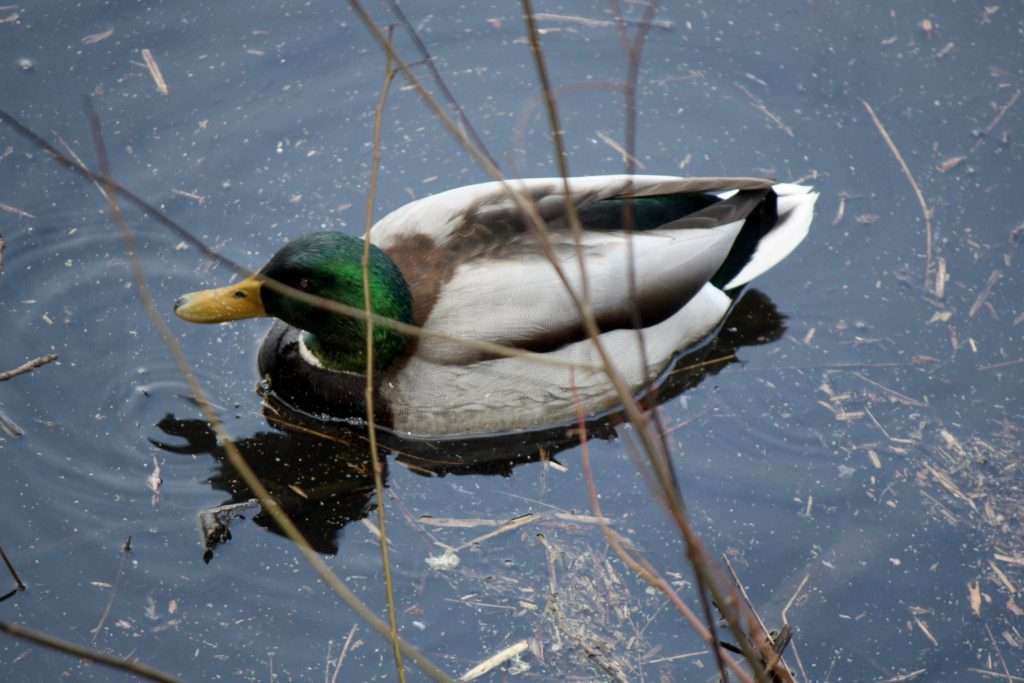 At the viewpoint along the Springwater Corridor overlooking the Willamette River, visitors can see many larger aquatic birds. Look first at the nearest channel to find common mergansers gracefully diving or loafing on the small islands of logs. Moving farther out, expect to see double-crested cormorants or Canada geese diving or floating in the sluggish water. Across the river is a sandbar which is a favorite gull roost, at times holding mew, California, glaucous-winged, herring and ring-billed gulls or, rarely, Thayer’s gulls. These birds are constantly on alert because nearby Sand Island usually holds at least two bald eagles and sometimes as many as five. This island also hosts California quail, a strange place for this species, which can occasionally be seen when a family group ventures to the exposed sandy edges to feed. 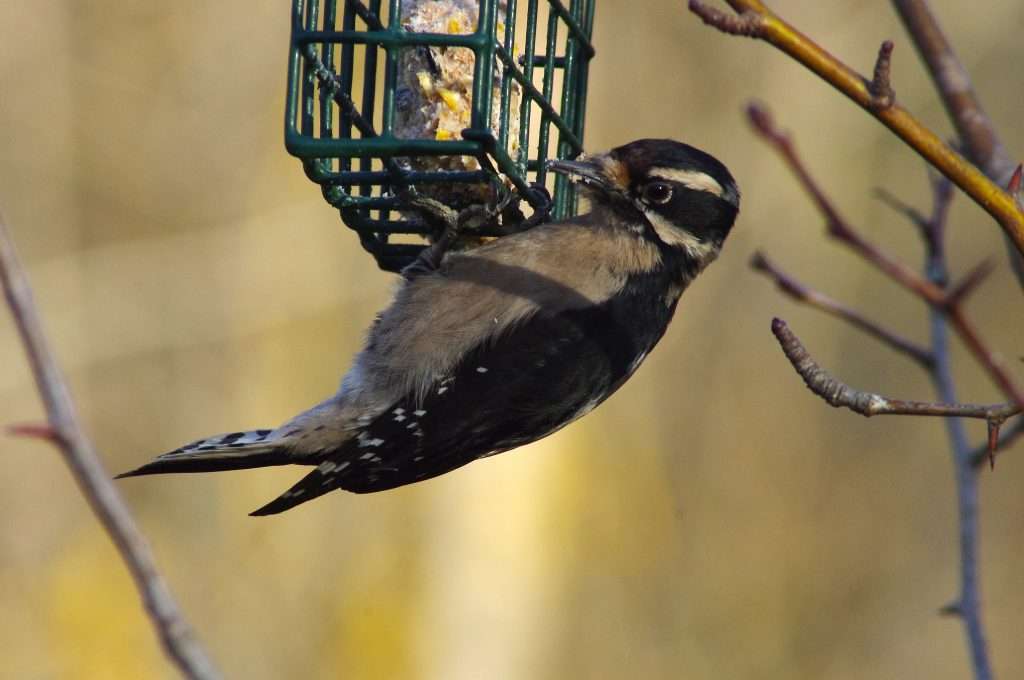 A female downy woodpecker at a feeding station in Oaks Bottom. (Photo by John Sparks)

Take time at this final stop to look and listen for flocks of mixed species foraging in the large cottonwoods to the left of the viewing area; these can include golden-crowned kinglets and downy woodpeckers. Additionally this is a favorite hangout for hairy woodpeckers, the larger, louder, and locally less common relative of the downy woodpecker. This spot is where many waterfowl entering the refuge fly over but, rather then looking up, listen for the noticeable whistling sound from the rapid wing beats of the ducks. And, when the weather grows warmer and the first miniscule green buds burst from the twigs, the ducks will be departing overhead, wings whistling farewell as they begin the long journey north.