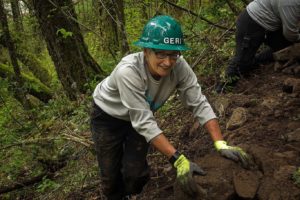 Geri Marz joined Trailkeepers about a year ago. She’s volunteered weekly almost ever since joining, and put in many volunteer days over the past winter, spring, and summer on a trail crew building the new Viewpoint Trail at Milo McIver State Park. John Sparks and Michael McDowell met with her in August to discuss her TKO volunteering.

What led you to start volunteering for Trailkeepers of Oregon?

I went to a Metro fair last summer. It promoted bike paths and hiking trails, and there were things from the gorge, but I walked by the booth about trailkeeping and that just grabbed me. I thought it was interesting—building the trails, and the tools. I looked at it as, “Gosh, it’s good exercise. It’d be really fun to do.” I was a little bit intimidated, though, because I hadn’t done that kind of thing. It took me probably three months before I went online and indicated an interest. I had retired, and I was looking for some volunteer things to do.

Have you done other volunteer work besides TKO? 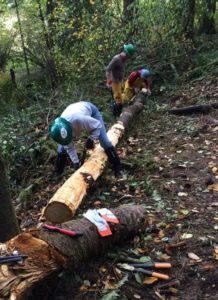 Peeling bark off logs. Geri is in the green hat in front.

I did SMART with kids for about a year at the Boys and Girls Club. I love going there because it’s year round and fairly close. I do Pixie Project. It’s a nonprofit dog and cat adoption agency. They have twenty-five dogs and fifteen or twenty cats at a time and do interviews with perspective owners to match up the cats and dogs with people. I walk the dogs and feed and care for the cats, probably four or five hours a week. I’m part of the foot patrol in the Pearl, kind of a Neighborhood Watch thing. Every other Thursday I lead a group at six o’clock. It’s observe-and-report—about graffiti, any camping, a broken park bench. I was also able to do a volunteer week with Washington Trails Association this summer.

How many trail crew trips have you been on?

I think it’s about thirty-five. I’ve got the orange hat, which is twenty-five trips and a little bit of skills college. I’ve got a yellow hat that’s for when I fill in as a temporary crew leader.

What have been your most interesting experiences in volunteering for TKO? 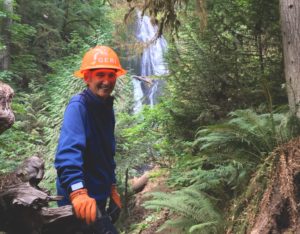 Building the McIver Viewpoint Trail. It was just one big muddy mess. It was all winter long and it was just a challenge. It certainly bonded all of us, for sure. There were days we wouldn’t even measure in feet—it was in the amount of mud we could shovel off or scrape down. It was a lot of mud-shoveling, but every week was a different experience. One of the best experiences is working with the different people. Elaine’s another woman my age, so there’s kind of a connection there. Pat doing his thing and never stopping and working all the way through. Ron, the technical guy. Everyone else looks at a log and says, “God, that looks pretty heavy.” Ron’s going, one-and-a-half feet by you know this many pounds, that’d be about five hundred sixty-eight pounds.” Then Susan, who’s much younger, who wants to build trails and design trails and learn all about being a sawyer. And then a guy who’s a vet who’s doing it for the exercise as well, I think. And then we get kids coming in from the Youth Ecology Corps. They’re just wonderful. They’re young and willing to learn and work. We’ve been able to mentor some of them and share whatever skills we might know. It’s an amazing group of people.

What are the things you’ve learned that you’ve liked the most?

The technical things. They interested me enough that I signed up and went to the Trail Skills College this last year at Cascade Locks. Learning how to correctly do the drain dips and the water bars and the rock work is interesting, diverting water or containing water. The good thing about doing Milo McIver during the winter was that water was everywhere. If we hadn’t done it when we did, I’m sure the trail would have washed away the first winter.

Are there any tools you’ve particularly liked? 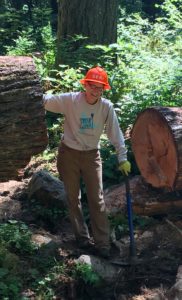 Geri at Oxbow Park after moving a boulder from between the log ends and into the dug-out hole, August 2017.

Sometimes when we start, after our safety talks, just to kind of engage, we’ll go around and say our favorite tool and what we like to do. My favorite tool, I think the universal tool, is the green grubber. Last week I had a project at Oxbow where they had sawn a log that had fallen across the trail, but a huge boulder blocked the trail through the cut ends of the log. I could move the rock a little bit with the rock bar. We had a lot of young kids, a lot of guys, so I got them. We dug a hole into a depression five feet down the trail, pried out the rock, rolled it in, and filled the rest of the hole. A rock bar and four young guys—perfect. It’s just really nice, the feeling of accomplishment. The beauty about trail work is that it’s instant gratification. I used to cook and it’s the same thing. You prepare a meal—design it, plan it, put it out—and there’s a reward right then. I’m all about that. I’m all about the treat. Trailkeepers adapted the approach that Washington Trails Association started—it’s “safety is first, fun is second, and work is third.” We don’t work too hard (laughs). It’s fun. It’s fun being outside. It’s fun doing the physical work. It’s fun to work side by side with people for whatever reason, and that just really hooked me the first day that I went.