Hikers’ feet—and on equestrian trails horses’ hooves—compact the soil and can turn the trail into a muddy mess. Hikers will then go around the muddy center of the trail, widening it and enlarging the muddy section. Some hikers will find nearby logs and small branches and place them in the mud to provide support. The benefit typically lasts only a short time, though, for the wood soon sinks into the mud. A good solution is a turnpike to elevate the trail above the wet ground. In November 2018, Trailkeepers of Oregon crews demonstrated the effectiveness of this technical solution as they built a 90-foot turnpike on a notoriously muddy stretch of the Maple Ridge Trail at Milo McIver State Park. 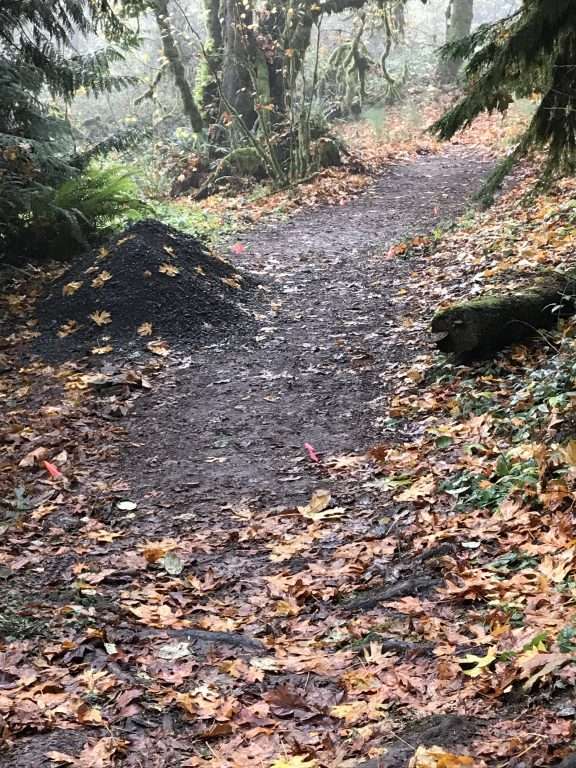 The muddy area where the turnpike was needed. (Photo by Elaine Keavney)

Turnpikes are built using logs along the sides, and dirt, gravel, or both between the logs, thus elevating the trail above the water table. Some sort of drainage must also be provided for the turnpike area. A ditch is often dug along one or both sides of the turnpike, draining into a culvert under the newly elevated surface. If a ditch or culvert is not practical, smaller ditches can be dug under the turnpike, reinforced with rock to keep them from eroding over time.

TKO planned the Maple Ridge Trail turnpike project with Park Ranger John Hilbert. We advertised it as a four-day trail party. Volunteers could come for as many of the four days as they would like, with free camping at the park.

Both the ranger and TKO work crews did advance work in preparation for the four-day event. The ranger used a mechanized toter to move loads of gravel up to the site. Pat Keavney took a few volunteers and flagged trees in the area, which the ranger later cut and dropped for us. On another day, a group limbed the downed trees, measured them into lengths to be cut by the ranger, and moved them to a staging area for later peeling.

During the four-day event, one volunteer team worked at two log-peeling stations set up in the staging area. The “peelers” took the bark off logs with drawknives to increase the logs’ longevity, and notched the ends of each log so they would meet up with each other along the turnpike. 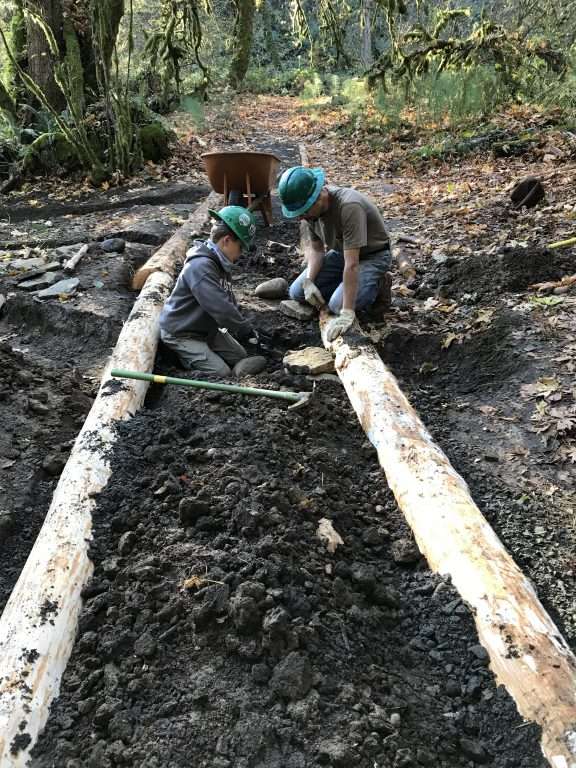 Measuring for log placement along the edge of the turnpike. (Photo by Elaine Keavney)

Another team started preparing the site itself, which hikers had widened to over twice its intended width. They removed many small branches that hikers had placed in the trail but were now buried in dirt and mud. They excavated the trenches that were to hold the logs, and saved the dirt to crown the turnpike.

Volunteers then dug a series of shallow ditches under the turnpike area and lined them with rock because the area is so flat that a side ditch was not feasible. Small rocks from a creek had to be carried about a quarter mile. In addition, the ranger was able to deliver flat granite pieces left from a previous project in the park. 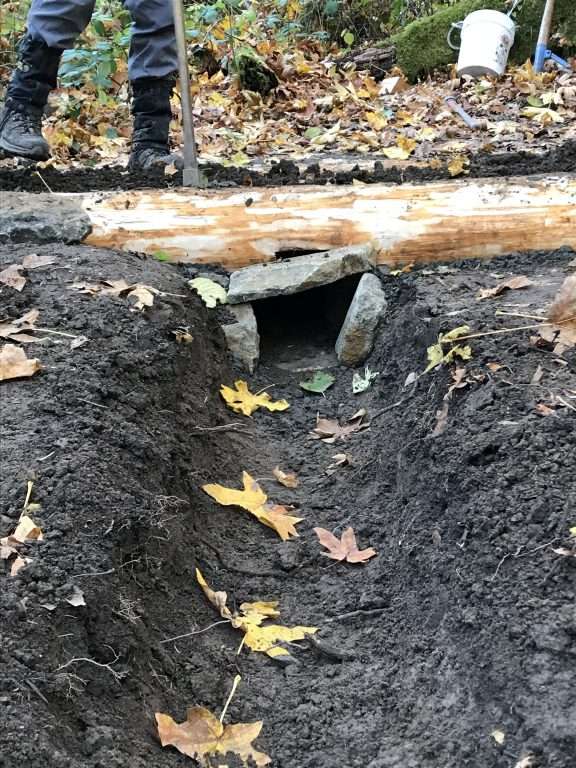 The Maple Ridge Trail turnpike project met the expectations of the planning team, TKO, and the park staff. Thirty TKO volunteers participated in the four-day event, for which we luckily had cool and dry weather. Both new as well as more seasoned volunteers learned and practiced new technical trail-building skills. This section of the popular trail is now nicely elevated above the mud, and the side logs clearly define the trail corridor. A check on the site in spring, after a rainy winter, showed that it is working as planned.