Along the Clackamas River between Oregon City and Estacada, 951-acre Milo McIver State Park has historically had a single trail connecting its upper and lower northern sections. Because frequent slides and the resulting repairs temporarily closed the Vortex Loop hillside section of the trail almost every year the past few years, Oregon State Parks was given grant funding to create a new, more sustainable trail. It would begin at a new Milo McIver Memorial Viewpoint overlooking the Clackamas River with views of Mount Hood and Mount Adams, and end near a meadow in the lower northern section of the park. Park Ranger John Hilbert contacted TKO Crew Leader Elaine Keavney about the possibility of TKO volunteers leading the trail-building project. Pat and Elaine Keavney met with the ranger several times in early September 2016 to flag the proposed route. 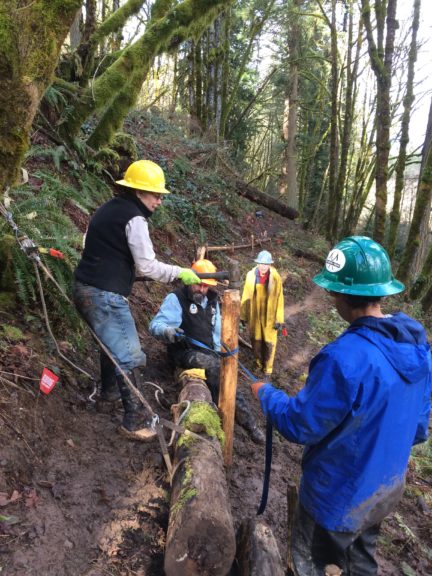 Elaine Keavney pounds a Grimm stake to secure a curb log along the Viewpoint Trail, while two trail workers support the log with straps. Photo by Elaine Keavney.

McIver’s land managers—the lead park ranger and the recreation manager—gave TKO challenging guidelines: Although the trail was to go along a steep canyon wall, they wanted no switchbacks or sharp turns which would require constant maintenance. They also wanted no culverts, for the same reason (we installed only one). Following standards for new trail design, they (and we) wanted the grade to be no steeper than ten percent, with short sections of fifteen to twenty percent, if necessary—a difficult goal in this steep canyon environment. 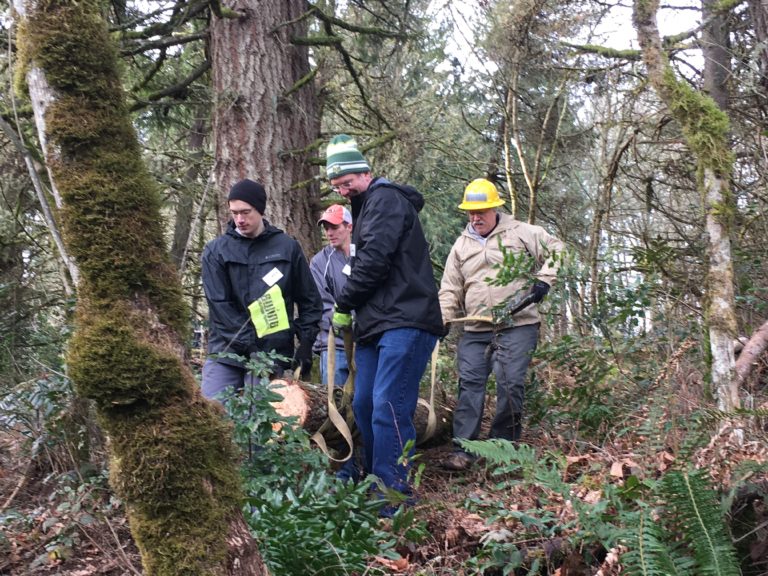 Carrying a curb log for placement on the Viewpoint Trail. Photo by Elaine Keavney

We began work on the trail in September 2016. We held work parties every Tuesday throughout the fall of 2016 and the winter and early spring of 2017, except for two Tuesdays when inclement weather forced cancellation. We also held one weekend and two Saturday work parties. Crews from Antfarm Youth Services of Sandy, Oregon, worked on the trail several times, and a crew from Northwest Youth Corps worked for a week. 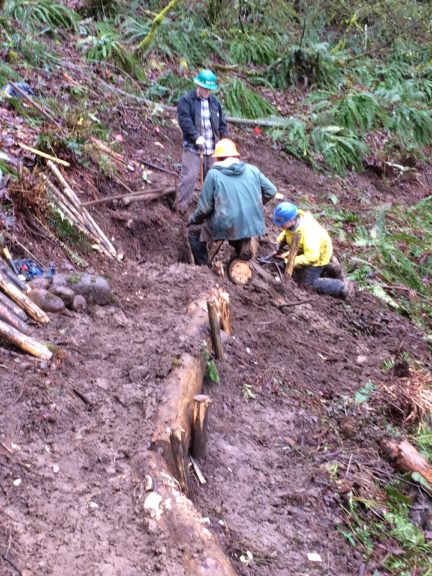 The end of a very muddy day on the McIver Viewpoint Trail. Photo by Elaine Keavney

We started working from the upper trailhead. As the rains increased and the terrain became steeper, the slippery, muddy conditions made our work environment increasingly unsafe. One day, TKO and Antfarm volunteers slid downhill on the proposed trail route, and it became clear that a new route needed to be considered. We abandoned the initial trail and moved the route to decrease the grade and make trail-building safer. We also changed the starting location of our work parties to the lower trailhead for several weeks, where the grade was less steep. We continued to make changes from the originally flagged route in order to try to maintain the desired ten percent grade and keep the work environment safe. Luckily, constructing the trail during the rainy winter let us know immediately whether a route would withstand heavy rains or needed changing. If we had built the trail during the summer, following our original routes, it would have had many drainage problems that we would not have noticed. All told, the route was changed eight times during planning and construction. 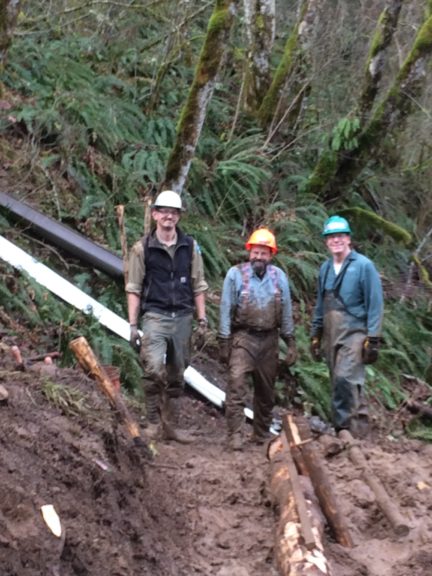 A very muddy day on the Viewpoint Trail. Photo by Elaine Keavney

The soil proved to be permanently muddy and slick, worse in some areas than others. One particularly steep, muddy section took TKO and Antfarm volunteers seven weeks to complete sixty feet of trail. Water was oozing out of the mud on the trail backslope as we worked. More than one volunteer had a foot come out of a boot to which the mud had clung like quicksand.

In the fall of 2016, the TV show Grimm filmed in the meadow on the lower end of the trail. As part of their production, they created a palisade fort using six-foot poles sharpened at one end, many of them peeled. When they were done filming, at our request they left us the poles, which we used as stakes and curb logs on the trail. We even took some of them to a different project at Elowah Falls in the Columbia River Gorge. 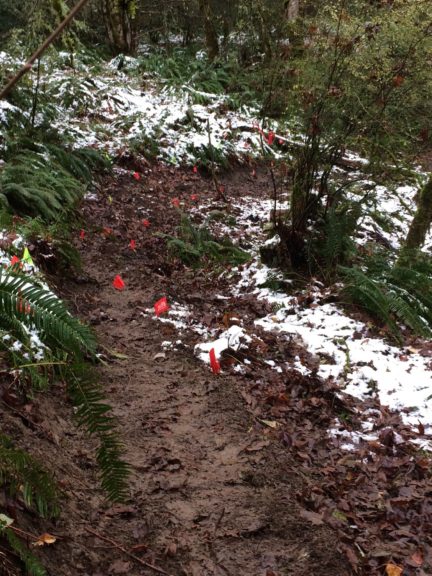 The flagged Viewpoint Trail after a light snowfall December 6, 2016. Photo by Elaine Keavney

Some statistics for the new Viewpoint Trail:

The trail officially opened with a dedication ceremony at the viewpoint on July 29, 2017. The completed trail is fully graveled and has a sustainable grade that should be comfortable for families to hike for many years to come.

Next issue: The proper techniques for pruning back brush when out on the trail.

While McIver State Park Viewpoint Trail has been the focus of many TKO work parties over the past year, it certainly hasn’t been the only trail worked on. Although Eagle Creek Fire closures forced the cancellation of work parties on the upper Oneonta Trail and at Punchbowl Falls County Park this fall, others proceeded as planned. These are the projects we worked on in September, October, November, and early December 2017.