The Viewpoint Trail – a memorable project

One of the most memorable trail projects that my husband Pat and I did for TKO was the design and construction of the Viewpoint Trail at Milo McIver State Park.  We began this project in the fall of 2016 and completed it in June of 2017. This half-mile graveled trail connects the upper and lower sections of this 950-acre park. 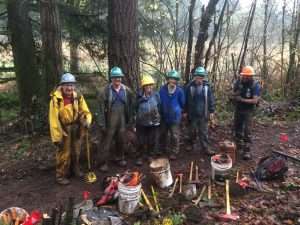 There are several things that make this a memorable project for me.  It was the first trail project that we had done from start to finish, including the design and layout.  We worked closely with Park Ranger John Hilbert, who is now at Silver Falls State Park, to lay out the trail corridor.  The trail goes through a steep canyon, and the land manager had some preferences that we needed to consider (i.e. no switchbacks). 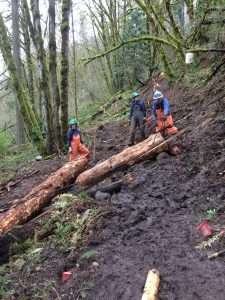 This project brought its own unique set of challenges, including these downed logs. – photo by Elaine Keavney

With one or two exceptions, this was the first project I had led as a crew leader. TKO was much smaller then and the support mechanisms such as registration options, office staff, and other experienced volunteers was not what it is now.  Pat and I learned a lot, and we made some mistakes, as we went along. If you look closely, you can still see evidence of places where we initially started to put the trail but reconsidered as we moved forward. 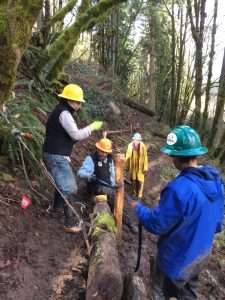 Crew Leader Elaine shows the crew how its done! – photo by Elaine Keavney

Another thing that makes this a memorable project was the weather.  It was a very rainy winter, and we came home every week with very muddy tools and clothes.  We didn’t realize it at the time, but the rain was a blessing in terms of the trail layout. Because we were really able to see where the water wanted to go through the canyon, we were able to design a trail corridor that is more sustainable than we might have made in a drier year.

The end result was, and remains, very satisfying.  The trail corridor is holding up well and has required minimal maintenance other than annual brushing back of vegetation. It is used and enjoyed by park visitors on a regular basis.  The work that Pat and I did on this project increased our knowledge base and confidence and has allowed us to move forward with several other similar projects in other locations. 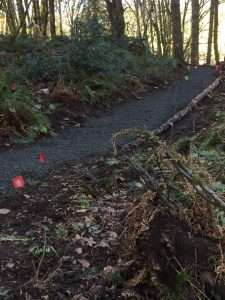 A sample of the finished Viewpoint Trail – photo by Elaine Keavney

During the nine months of this project, 7 volunteers earned their green hat, signifying 5 TKO trail party days. Of those seven, five are now either crew leaders or assistant crew leaders.  The Viewpoint Trail project was instrumental in developing the leadership cadre for TKO, a leadership so badly needed and utilized after the 2017 Eagle Creek Fire. 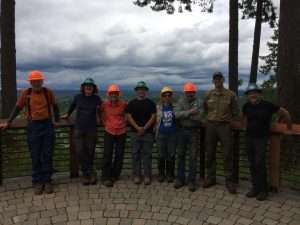