The Saga of Pancake Rock on Angel’s Rest

The Trailkeepers of Oregon rock team on the Angel’s Rest Trail affectionately dubbed a flat andesite rock “Pancake Rock.” Measuring about three feet by four feet across and one foot thick, the rock has been around since Larch Mountain was issuing lava flows some one and a half million years ago.

More recently, it had found a home nestled in the roots of a large Douglas fir tree perhaps over 100 years old.

I was curious about how safely this rock was held by the roots of this fir; it appeared to be only held in place by two smaller rocks below its outside edge. A small jostle of one of those rocks with my shovel, a whoosh and a thud, and Pancake Rock was now in the middle of the trail! Wow! 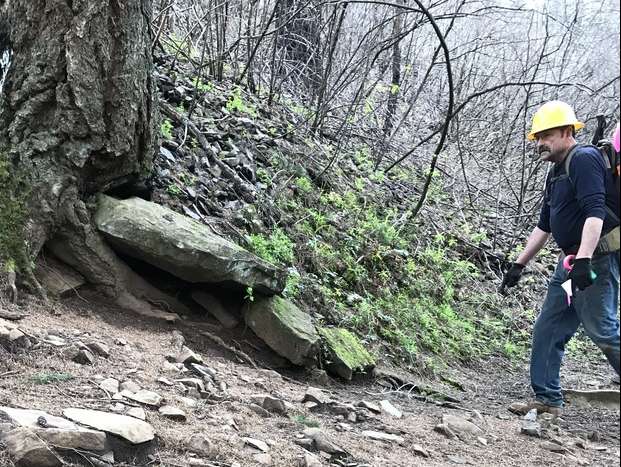 Pancake Rock nestled in the root system of a Douglas fir. (Photo by Elaine Keavney)

I was initially amazed, and then I began to worry. This rock could have released at any time! Imagine if this trail were busy with the many hikers that frequent it. But then the “rock guy” in me quickly resolved that problem—just how could we now use this rock in the badly-worn switchback nearby? Could we make it a trail feature—for example, the focal rock for a new switchback corner? 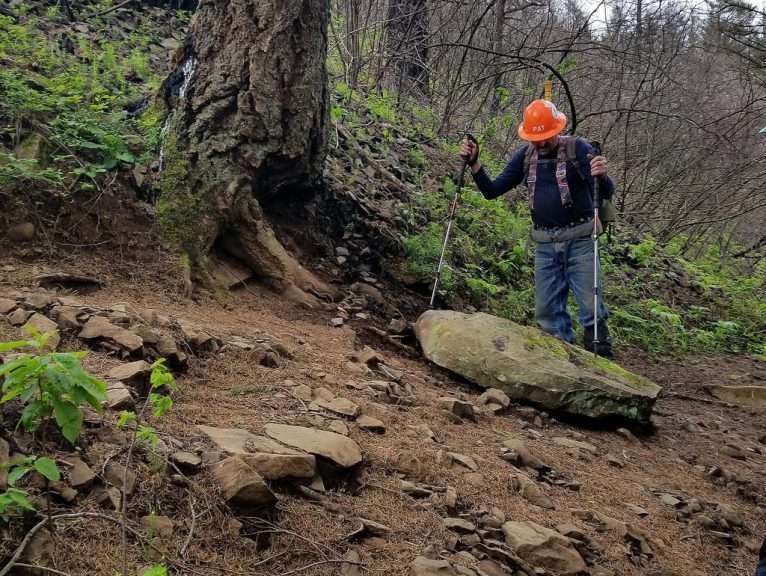 Before my return to the Pacific Northwest, I had spent eight years being introduced to the “art of rock structures” with the New York-New Jersey Trail Conference (NYNJTC), one of the nation’s oldest regional trail stewardship organizations. The Northeast is an area where rocks are the dominating feature of any trail. Dirt? What dirt! Think rock. If you have hiked anywhere in the Appalachians you know what I mean.

After retiring and moving back to the Portland area, I continued my volunteer efforts with Washington Trails Association (WTA), primarily working on trail projects in southwest Washington. There I met Pat and Elaine Keavney, who are frequent Thursday work party participants with WTA. After the devastating Eagle Creek Fire last fall, I asked them how I could help with Gorge restoration efforts. I was soon engaged in teaching rock structure skills to many new TKO trail volunteers.

Chicken wire mold of the bottom of Pancake Rock. (Photo by Guy Hamblen)

When trail restoration efforts started in early March, the Angel’s Rest Trail offered many rock structure opportunities. The Tuesday work parties started on new retaining walls protecting a switchback just above the Coopey Falls Boy Scout footbridge about one mile in on the trail. This was a great first learning experience for TKO trail volunteers since this new switchback combined the key elements of most rock structure work:

Like tread and drainage structures, rock structure projects follow the broad engineering guidelines of durability and sustainability, to maximize structural lifetime and minimize required maintenance. A specific structure must be designed to withstand three primary loads or forces: gravity, side forces, and downward user loads. Environmental loads such as freeze-thaw cycles, snow, or water loads are often not considered but should be.

So Pancake Rock certainly was a great candidate as a corner or anchor and focal rock for our new switchback. A focal rock draws attention to the switchback corner, anchors perception, and, as trail designer Troy Scott Parker says, “gives a trail a visible reason [for a hiker] to be here instead of there.” This visual anchor guides a hiker through the switchback, which reduces cut-throughs where hikers take shorcuts.

We planned to move Pancake Rock with a rope puller about six feet up the trail and skid it into a prepared hole to the proper depth and angled (“battered”) into the hillside at about 15 degrees. This was more easily said than done since Pancake weighs in at around 800 to 1,000 pounds and is four and a half feet long. We created a chicken-wire screen mold of the bottom of the rock, which we then used to create a replica hole for Pancake Rock, thereby increasing our chances of a solid fit into the earth and a consequent durable solution.

We had one chance with this move; we needed to get it correct the first time because it would be very difficult to move Pancake once it settled into the excavated hole. Using the “Egyptian method,” we tugged the rock onto three-inch logs over which it could roll. We steered it using two large rock bars. Once it was positioned above the hole, we called for slack from the rope puller and then guided it towards the hole. Before we knew it, Pancake was settling into its new home—success! And it does look like it actually belongs! A five-minute video by Ralph Bloemers of the Crag Law Center shows how the rock was placed into its final position.

Not all rock structures and their construction are this exciting; most are exercises in patience trying to make the structure just right, one rock at a time. Most structures require 50 percent heavy manual labor, but it’s the 50 percent artistic component that makes the effort worthwhile and satisfying for the team so they can say, “Hey, we built this together!”

For more about rock work, watch TKO’s July 2018 presentation “Trail Work with Rocks: An Uplifting Experience.” You might also monitor TKO’s listing of trail stewardship events for upcoming rock project efforts. See you on the trail!