The Alder – Tree of Earth, Fire, and Water

We tend to ignore alders in the leafy summer months, when they become subsumed in the general blaze of green and lorded over by sprawling mossy maples. In winter and early spring, however, the alder’s gray-white bark, becoming dappled by lichen as the tree ages, stands out, often starkly, from a dreary landscape. In Celtic tradition, the alder symbolized the resurrection of life after the spring equinox in mid-March, and it is the favorite tree of fairies. 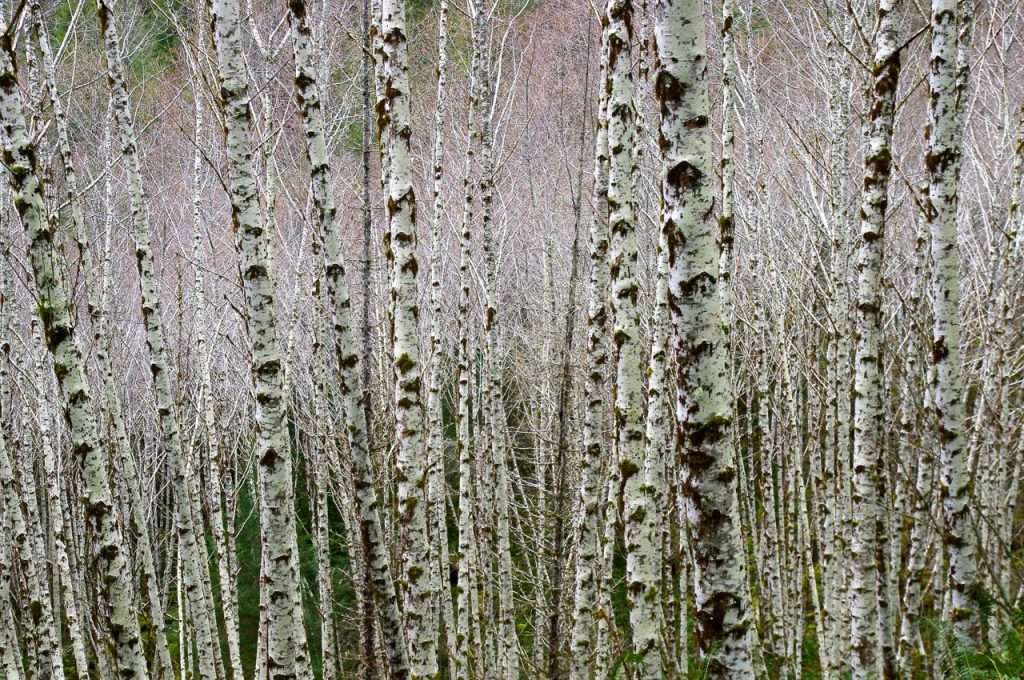 Hikers in Oregon may encounter any one of the four species found here, although it is the red alder (Alnus rubra) with which most are familiar. This tree is common in western Oregon, from the Cascades to the Coast, especially in logged over lands and along riparian corridors. The second species which many will be familiar with is Sitka or slide alder (Alnus alnobetula sinuata), that shrub which colonizes collapsed hillsides and crowds the narrow road to a remote trailhead, pinstriping your vehicle as you run its twiggy gauntlet. Less well-known are white alder (Alnus rhombifolia), a tree of riparian zones in both eastern and western Oregon; and thinleaf alder (Alnus incana), which grows along streams and ponds east of the Cascades. 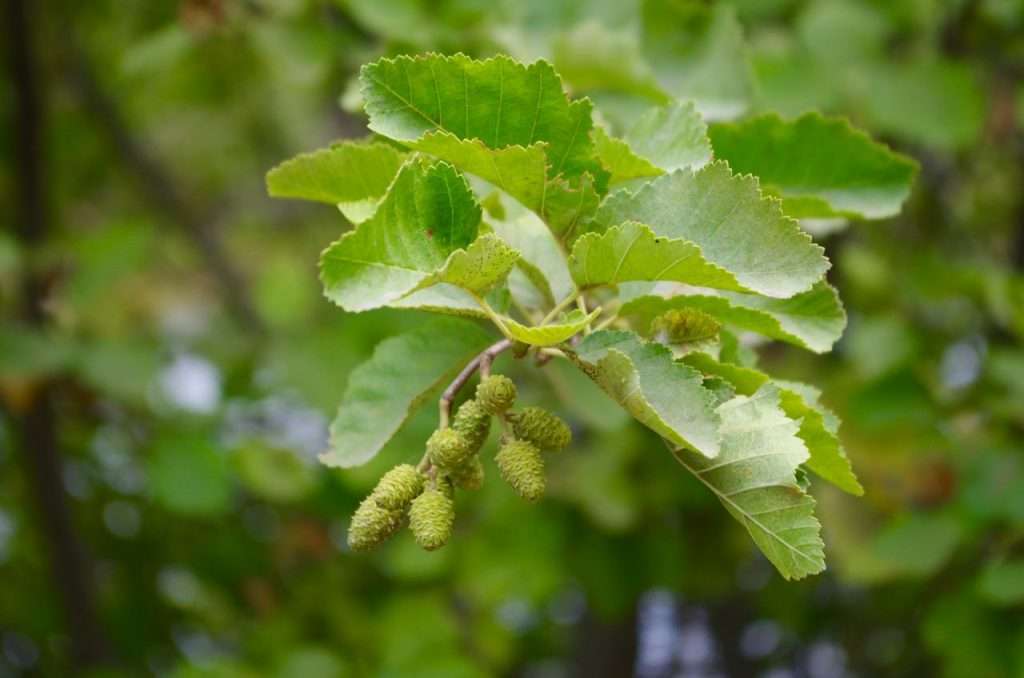 The young cones of a thinleaf alder on the Deschutes River in Bend. (Photo by John Sparks)

Alders growing at low elevations produce male and female catkins in winter before the leaves begin to emerge. The female catkins develop into green cones that turn dark brown and stay on the plant throughout the winter. Alders aren’t an acclaimed member of any fall color display. The leaves tend to drop when they are still green, and the best they can turn is a dingy brown. 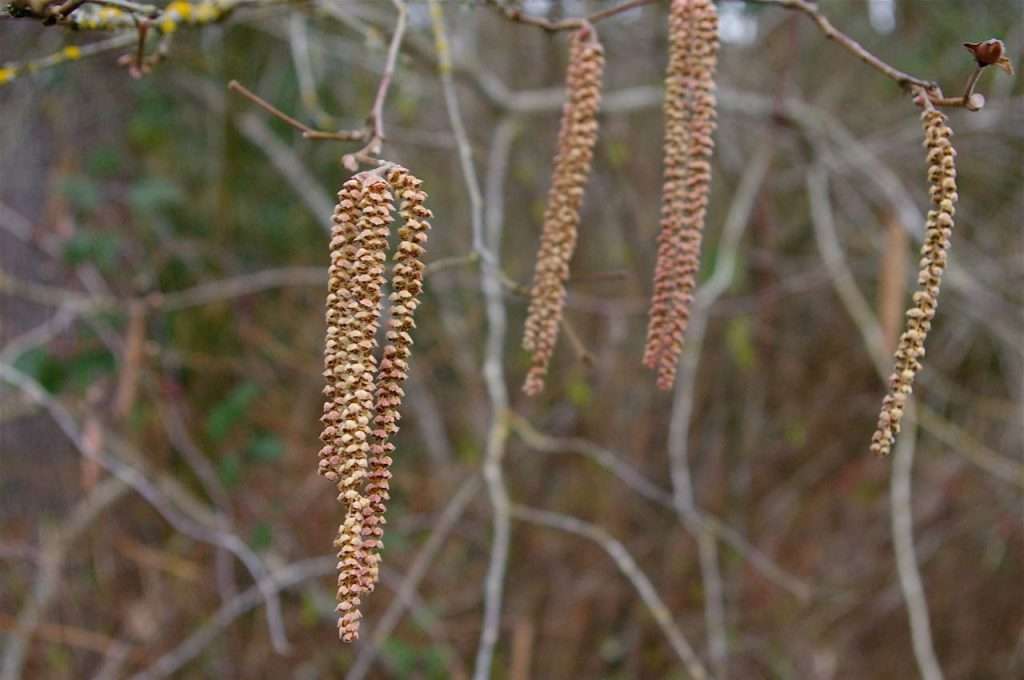 Male catkins of the red alder. (Photo by John Sparks)

Alder was an important resource for traditional communities throughout the northern hemisphere. Native Americans used the wood to make utensils and bowls, ate the inner bark in spring, and considered it the only wood suitable for smoking salmon. The tree was seen as an important source of natural dyes in both Europe and North America: red and orange from the bark, brown from the twigs, and green from the catkins. To the Celts, these dyes symbolized Fire, Earth, and Water. On both continents, the alder served as a powerful medicine as the bark produces salicin, an anti-inflammatory agent. It was also used as an antibiotic salve and a potion against tuberculosis. Going back thousands of years, alder was the go-to source for wood pilings that supported bridges and Neolithic crannogs (artificial islands) as the wood is extremely resistant to decay underwater (alder rots rapidly when exposed to oxygen). Much of Amsterdam was constructed upon alder supports, and Venice, the “floating city,” was built mostly upon pilings of alder and oak brought in from Croatia beginning in the 5th century A.D. Today, red alder is the most important commercial hardwood in the Pacific Northwest. It stains easily, polishes and paints well, and rarely splits. Red alder is also the most economical quality wood for cabinets and furniture (as well as smaller wood products like crates, handles, and trays) and is a major source of pulp and plywood. 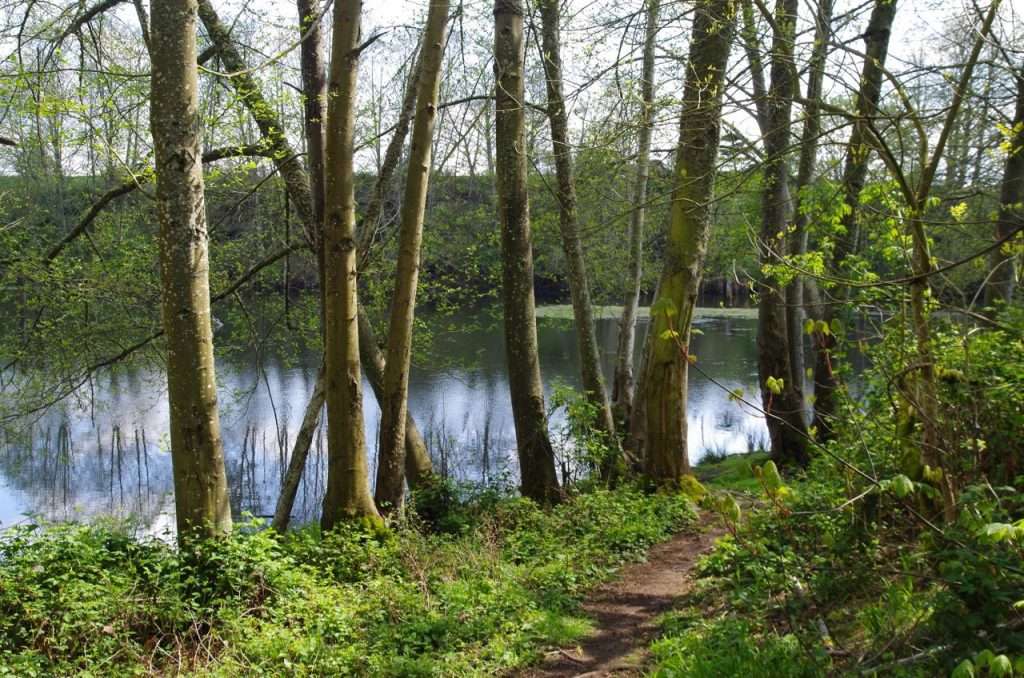 White alders on the shore of First Lake in Simpson Park, Albany. (Photo by John Sparks)

As for wildlife, alders are an important link in the food chain. Along with willow, their bark is a staple of beavers and the branches are used to build dams. The saplings are a forage food for deer and elk from fall to early spring, when other pickings are lean. Alder trunks are a favorite post for male elk to rub their antlers on, first to remove velvet, and in the fall, in conjunction with sweat glands, to leave evidence of their presence as a challenge to other males; the practice also strengthens their neck muscles in preparation for sparring during the rut. 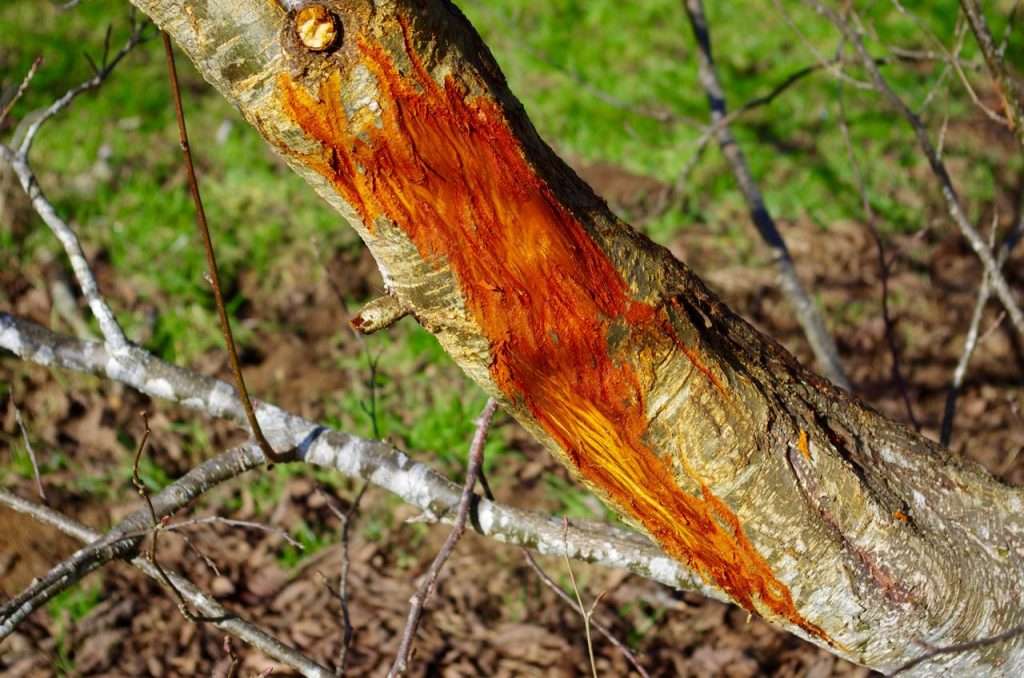 Alders generally only live to be 50 years old or so, and they tend to drop limbs easily. Anyone who has hiked the trails or driven logging roads in the Coast Range, for example, will notice the large amount of alder debris after even a normal winter. The range of red alder has expanded exponentially since the arrival of white settlers, with clearcutting being the major cause. In Oregon, alders are also one of the first species to colonize an area after a forest fire. Once mainly a streamside tree, red alder has colonized whole hillsides in places like the Tillamook State Forest. It is quick to establish pure stands in disturbed areas, and it takes 50 years for a “fast-growing” conifer like the Douglas-fir to shade it out and become dominant. 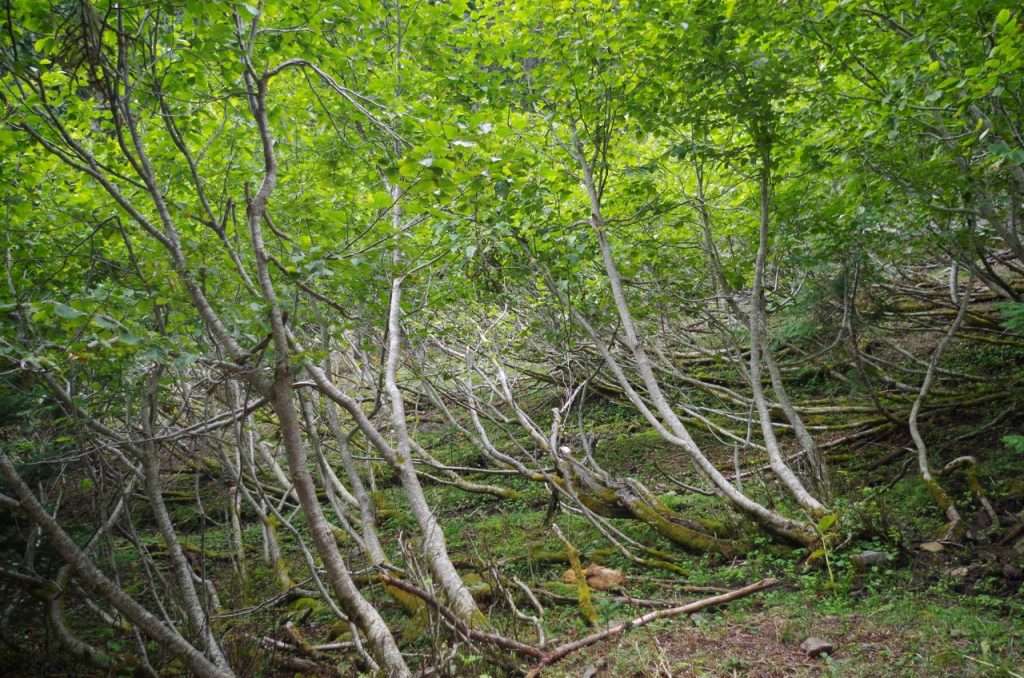 Perhaps the alder’s greatest attribute is its ability to fix nitrogen in the soil. Various alder species have established a symbiotic relationship with a bacterium, Frankia alni, which forms nodules on the roots. Frankia is a nitrogen-fixing organism, and it shares that element with the alder so that alders, like legumes, return nitrogen to the soil through the annual accumulation and decay of their leaf and twig litter. There is some evidence that the Inca planted alder to fix nitrogen on their Andean terraces, and U.S. forestry scientists have considered it as a cover crop for severely depleted soils and in areas that harbor conifer root rot fungus, to which alders are immune. Understory plants that love acidic soils, like huckleberry and salal, don’t flourish under an alder canopy. The next time you’re out on a hike, consider the role of the lowly alder in the complex forest ecosystem. 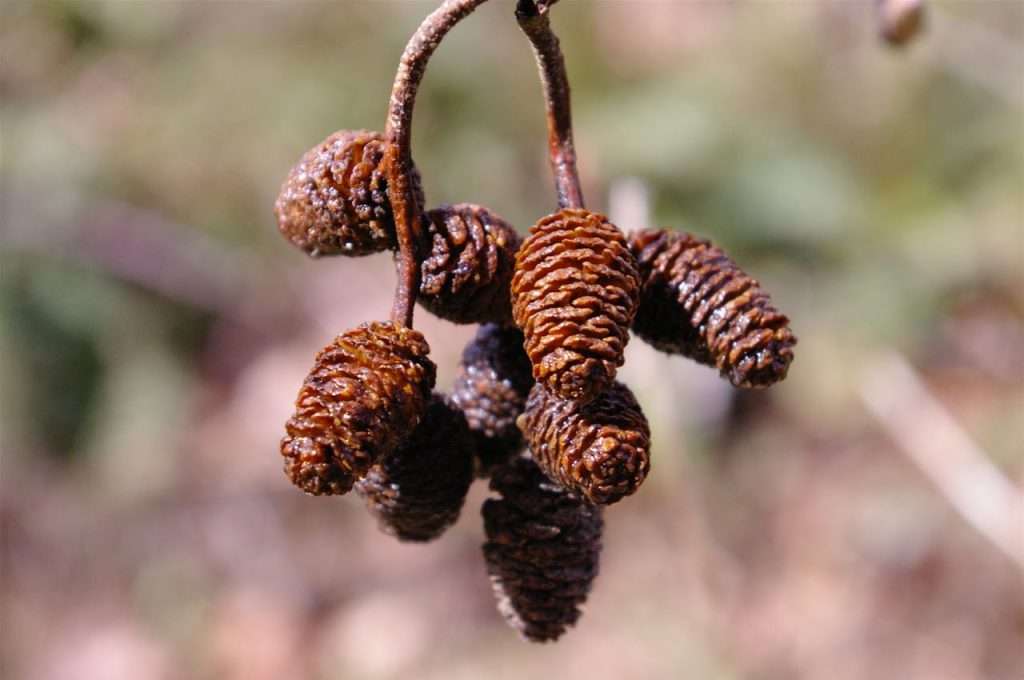 Red alder cones in winter at McCarthy Creek in the Tualatin Hills. (Photo by John Sparks)