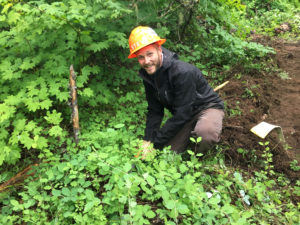 While chopping up the dirt on a trail near Hood River with TKO volunteers not long ago, I was answering as many questions as I was asking as we got acquainted. Having recently left my job as an Oregon State Parks ranger to accept the role of Executive Director of Trailkeepers of Oregon, I get asked plenty of questions. My most common reply is, “They thought they should send a ranger. A jack of all trades, right?” One of my fellow crew members said, “Did you know there is a second part to that phrase? A jack of all trades is a master of none, but oftentimes better than a master of one.” It brought a smile to my face and reminded me of a line from a seminal figure in public lands’ history about the many roles of park rangers: END_OF_DOCUMENT_TOKEN_TO_BE_REPLACED