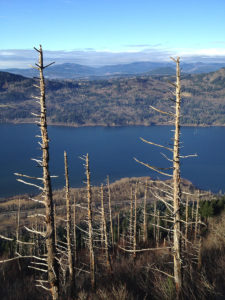 Fires in the Columbia River Gorge are as old as the place itself. Early white settlers called it the “Devil’s Wind” when summer drought combined with the wind-tunnel effect of the gorge to create racing forest-fire infernos. As recently as 1991, fires burned a swath from Angel’s Rest to Multnomah Falls and a separate fire burned Wauna Point above Eagle Creek. These same areas burned again this month, and so this timeless cycle continues. END_OF_DOCUMENT_TOKEN_TO_BE_REPLACED