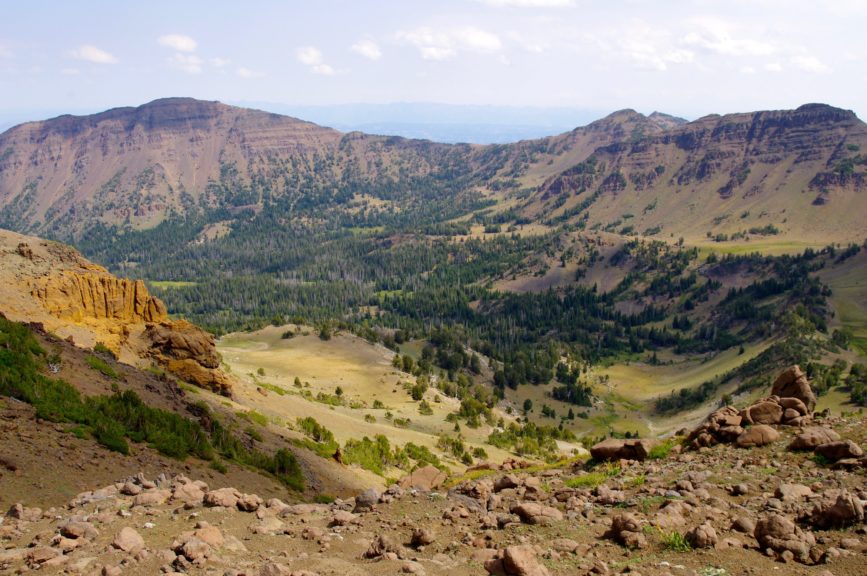 In summer Oregon hikers dust off their backpacks and stray far from their urban bases in search of an immersive experience in the outdoors. The Eagle Cap Wilderness in the Wallowa Mountains is a favorite choice with its fault-block peaks and open ridges and lake basins. If you’ve already spent a summer backpack or two in some of the popular Wallowa destinations, you’ll appreciate the solitude of this summer’s hike of the season—the somewhat un-Wallowa-like hike in the McCully Basin. 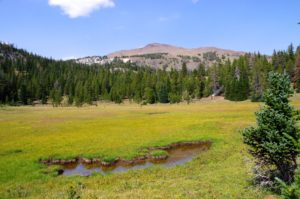 The formations and peaks around McCully Basin are Columbia River basalts, more similar to the strata in the Columbia River Gorge than to the distinctive slopes of marble and granite in most of the Wallowas. There are no lakes. The area sees a few hunters in the fall and telemark skiers in winter, but remains somewhat off the radar for hikers. The lake and granite junkies will have coagulated elsewhere. You’ll share McCully’s high meadows with the elk and the deer. There are numerous excursions to consider while camped in the series of meadows that, pre-World War II, once grazed flocks of sheep. McCully Creek and McCully Basin are named after Frank D. McCully, a merchant, banker, politician, and sheep rancher in Joseph, Oregon, who once drove his herd up the valley for summer grazing.

The approach to the basin is short—about five miles to a campsite—but you’ll have to put up with a somewhat diseased forest of Engelmann spruce, lodgepole pine, ponderosa pine, Douglas fir, and western larch. There’s a lot of deadfall, but since the trail is also used by horses, it should get logged out fairly early in the season. After about four and a half miles, you cross McCully Creek and the first of the camps and meadows appears to your right. Wait another 0.6 miles after the creek crossing, though, and, before the slope begins to steepen, head cross-country off to the right and cross McCully Creek again. You’ll enter the first of several meadows on the west side of the bowl. (There are other meadows on the east side.) Look around the verges of the meadows in the trees for a suitable place to set up your camp. 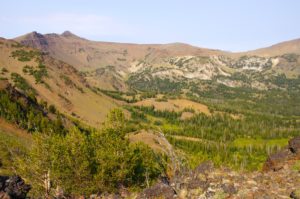 The fun begins when you begin to plan your day trips from camp. On the east ridge is Mount Melissa (9,128 feet), best reached by taking the trail south to the pass leading to Big Sheep Basin and then by working your way along Wing Ridge and high alpine fells. From the summit, you’ll get views to the Seven Devils in Idaho. At the southwest corner of the basin is Aneroid Mountain, Oregon’s ninth highest peak at 9,702 feet, and easily approached across the meadows and up past rugged formations to the ridge. Aneroid supports Oregon’s highest trees, some stunted krummholz whitebark pines in the summit area. The entire Wallowas’ panorama lies before you, including the well-known peaks of Eagle Cap, Matterhorn, Sacajawea Peak, and Pete’s Point. Aneroid and Dollar lakes sparkle below.

A more ambitious day hike will take you into the lovely Big Sheep Basin to the south to join the Tenderfoot Trail up along the Middle Fork Big Sheep. Then head northwest on the Bonny Lakes Trail past the lush, swampy Bonny Lakes to ascend to Dollar Pass. From here, you’ll have to head cross-country up and over Aneroid Mountain or its shoulder to get back to your campsite. Another cross-country loop will take you north from Aneroid to two other 9,000-foot prominences, Hidden and East peaks, on the long ridge west of McCully. Below East Peak, a user trail heads along the open slopes back to McCully Basin. A more grueling return to the McCully Trailhead would be to follow this ridge north to Mount Howard, and then to take the service road down from the tramway terminal to the trailhead. An overnight camp could be at a big spring on the northeast flank of East Peak, right on the user trail. This is favorite congregation spot for the local elk. And if you want to avoid those tramway crowds at Mount Howard, veer off the footpath from the last prominence before civilization and drop down an open ridge, passing above the dynamited adits of the Transvaal Mines, to intersect the maintenance track farther down. 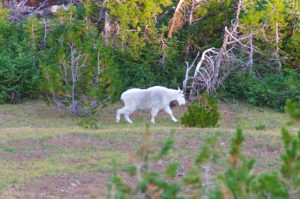 So when to go? Normally, from mid-July to the first part of October are the prime months for McCully. In September and October, you may be sharing the basin with a couple of adventurous bow hunters. Mosquitoes tend to fade away after mid-August, but they can still be vicious in swampy areas like the Bonny Lakes until the first freeze. In a big snow year like 2017, it’s worth waiting a little longer until you head to the high country. In the last few weeks of summer, there will still be blooms: Lupine verges the main trail, grass-of-parnassus flowers in swampy areas, monument plants (gentian family) thrive near the McCully-Big Sheep Pass, arnica brightens the many seeps and springs, and buckwheat and mountain balm adorn the stony ridges. If you’re planning on doing cross-country travel, make sure you take emergency equipment and extra food with you. Keep yourself properly oriented at all times: It’s easy enough to follow the high ridges on a clear day, but should the clouds come down, you may have to resort to a GPS or compass to find your way back.