The Angel’s Rest Trail was heavily affected by the Eagle Creek Fire, and TKO volunteers were eager to get to work on the restoration of this popular trail. The first volunteers began work on the section just below the Coopey Creek bridge on March 3, 2018. The work on that section was not so much restoration of fire damage as it was improving the drainage that is a chronic problem in that section of the trail. After the first two work parties, and after a fall by a volunteer, it became clear that before others could safely traverse the talus slope about a quarter-mile from the trailhead, the tread across the rock slope needed to be improved. The talus slope remained relatively stable after the fire, but many new rocks of various sizes on the trail made hiking treacherous, particularly when carrying tools. A TKO work party spent most of a Saturday moving rocks and stabilizing the trail across the talus slope. Many of these rocks needed to be hand-placed, since if they were tossed over the edge, they might fall all the way to the bottom and trigger other rocks to follow. 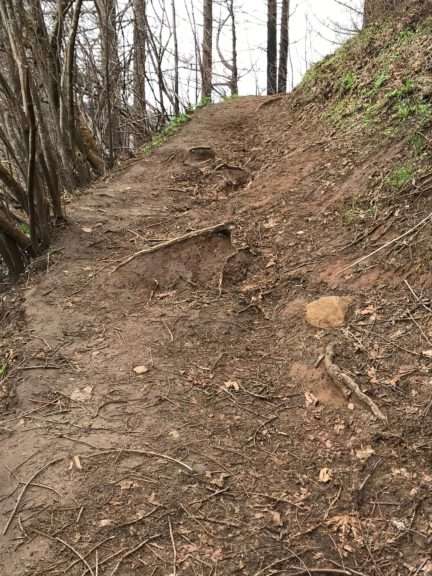 Before restoration: An eroded section of the Angel’s Rest trail makes for difficult walking with intersecting tree roots and sunken areas. (Photo by Elaine Keavney)

Once we crossed the Coopey Creek bridge, we were able to start tread work in earnest. Much of the early work was deferred maintenance on this trail, improving tread in ways that had been very challenging, if not impossible, when the trail was open to the public. We also began to consider how we could improve the switchbacks by repairing eroded trail and plugging the number of cut-throughs that hikers have made when shortcutting the switchbacks. With the understory burned, finding rocks for improving switchbacks was much easier. Work on the first switchback, supervised by Guy Hamblen, improved an area that had previously been a tangle of exposed roots. An assistant crew leader for Washington Trails Association with considerable experience in rock structure building, Guy began to come regularly to the work parties. He mentors volunteers in the art and skill of working with rocks and continues to come every Tuesday. 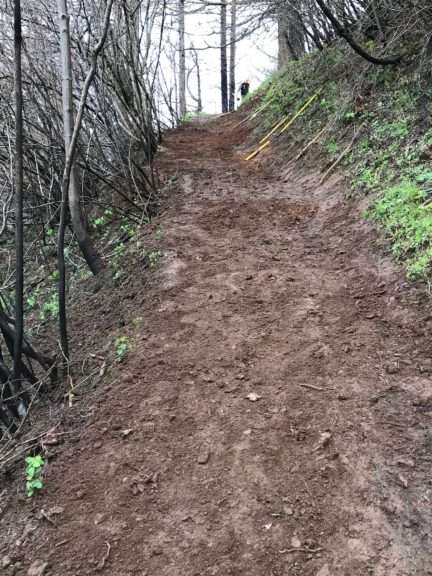 After restoration: The same section of eroded trail now has a smooth and safe surface to hike on. (Photo by Elaine Keavney)

As volunteers moved further up the trail, the evidence of fire damage became more apparent. Erosion problems became more prevalent, and in some areas many rocks needed to be removed. Oregon State Parks manages the lower section of the trail, and the US Forest Service manages the upper section, which was more heavily damaged by the fire. As we neared the boundary between the Oregon State Parks and Forest Service sections, Forest Service trails supervisor Dawn Stender, along with TKO executive director Steve Kruger and TKO crew leader Susan Schen, trekked to the top to assess the damage and begin planning for the work that needed to be done. 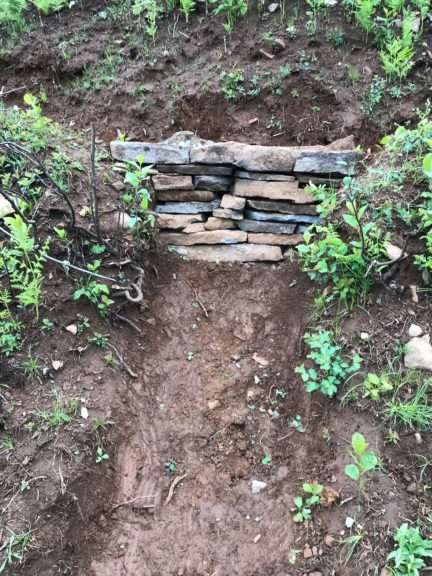 A new rock wall supports a previously eroded section of trail that had been used as a cut-through by hikers. (Photo by Elaine Keavney)

Both State Parks and the Forest Service have decided to limit crew size in the burn area to 12 people. Work parties have filled up almost immediately, with many new volunteers coming out to learn trail skills. For several weeks, we divided the group of 12 into two groups, one for tread work and the other for rock work, rebuilding the stacked switchbacks near the top which had suffered considerable erosion damage from the fire. After a few weeks, we began to realize that we could be much more productive with two teams of 12, one for tread and one for rock. Guy remained interested in developing a skilled rock team at TKO. Steve Kruger worked with the Forest Service and State Parks to get agreement on the two-team plan, which is now ongoing. Each team has a dedicated crew leader and assistant crew leader, and the teams are separated from each other by significant distance while remaining in radio or cell phone contact with each other throughout the day. 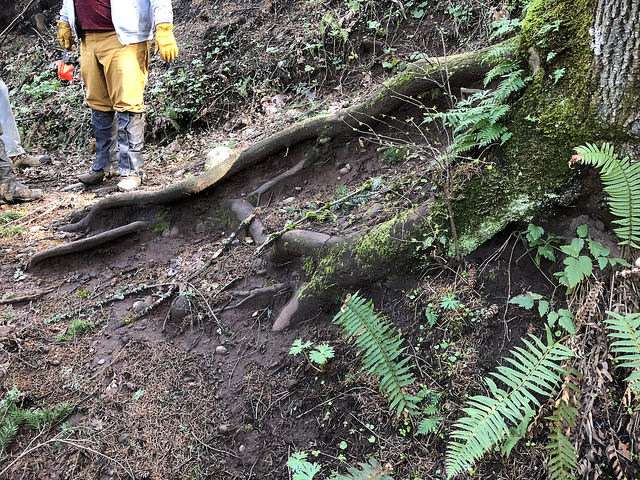 We are currently working at Angel’s Rest with two teams every Tuesday and will continue to do so until the work is complete. As of the first of June, we have had 21 work parties and are about halfway up the trail from the Coopey Creek bridge with tread work, and most of the 11 switchbacks at the top have been improved.

After rock work: On the same first switchback, a low wall with river rock behind it has pushed the trail away from the now protected tree roots. (Photo by Guy Hamblen)

It has been exciting to watch the landscape recover since we began the work in March. First the trilliums bloomed, then ferns and other undergrowth returned. Larkspur and other wildflowers have bloomed as never before, and the understory is looking healthy and invigorated by the fire. The tread in the upper section, however, still needs considerable work before it is safe for the anticipated high volume of hikers once the trail is reopened. We hope that when this trail reopens to the public, it will be in better shape and better able to sustain the heavy foot traffic that is sure to come.