The Wilson River Trail goes for 24 miles through the Coast Range, sometimes following its namesake river, and sometimes diverging into the mountains. There has been talk for years about an extension to the trail, but the Oregon Department of Forestry doesn’t have much of a budget for things like new trails. This is where TKO has been able to step in and help.ODF staff flagged a 6 mile route, and TKO volunteers have begun clearing the corridor that will eventually be the new trail. This “in-kind” work helps to reduce the hit to small budgets. The rumors will undoubtedly continue about the relatively short remaining segment connecting to the Storey Burn trail, which will create a continuous route from the Gales Creek Campground to the east with Keenig Creek Campground to the west. 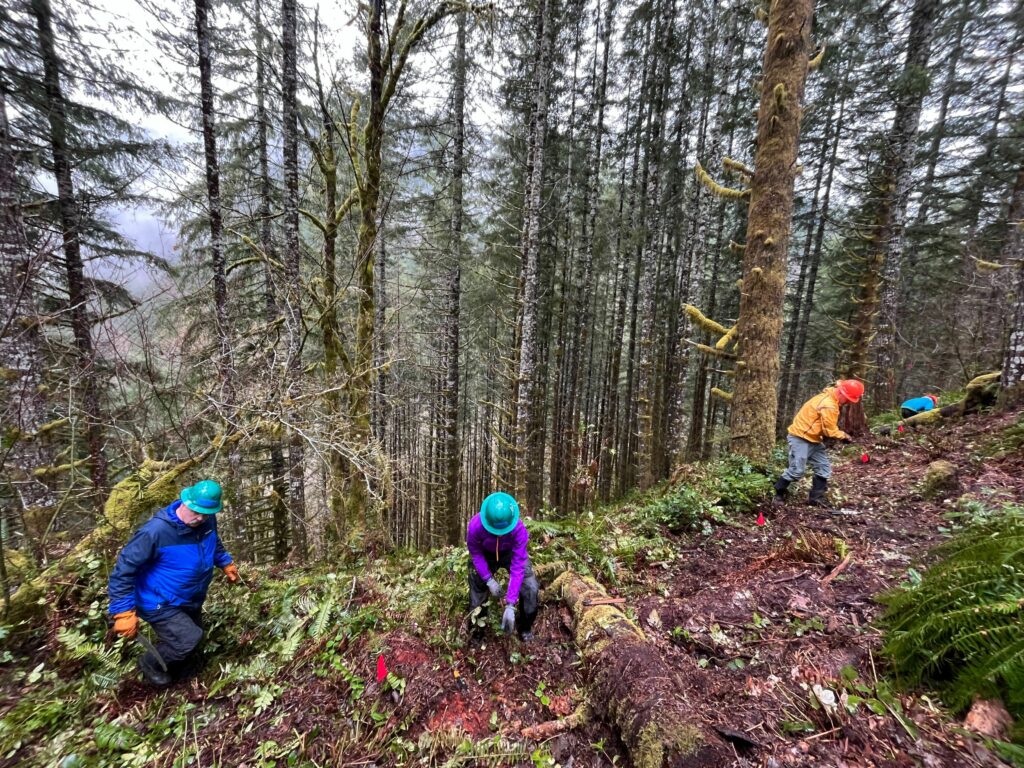 Beginning at the current end of the trail at the top of Idiot Creek Loop Road, a string of red ribbons tied to trees marks the route. It traverses the steep south side of the canyon of the Devils Lake Fork of the Wilson River, and ends at the site of a former logging camp known as “Idiotville”.

The current task of TKO volunteers is to clear out vegetation from 4 feet on either side of the line marked by the ribbons. Other groups, such as regional youth corps and prison work release crews guided by ODF personnel, will eventually follow this path, removing logs and the duff layer to prepare for the excavation of the tread surface. 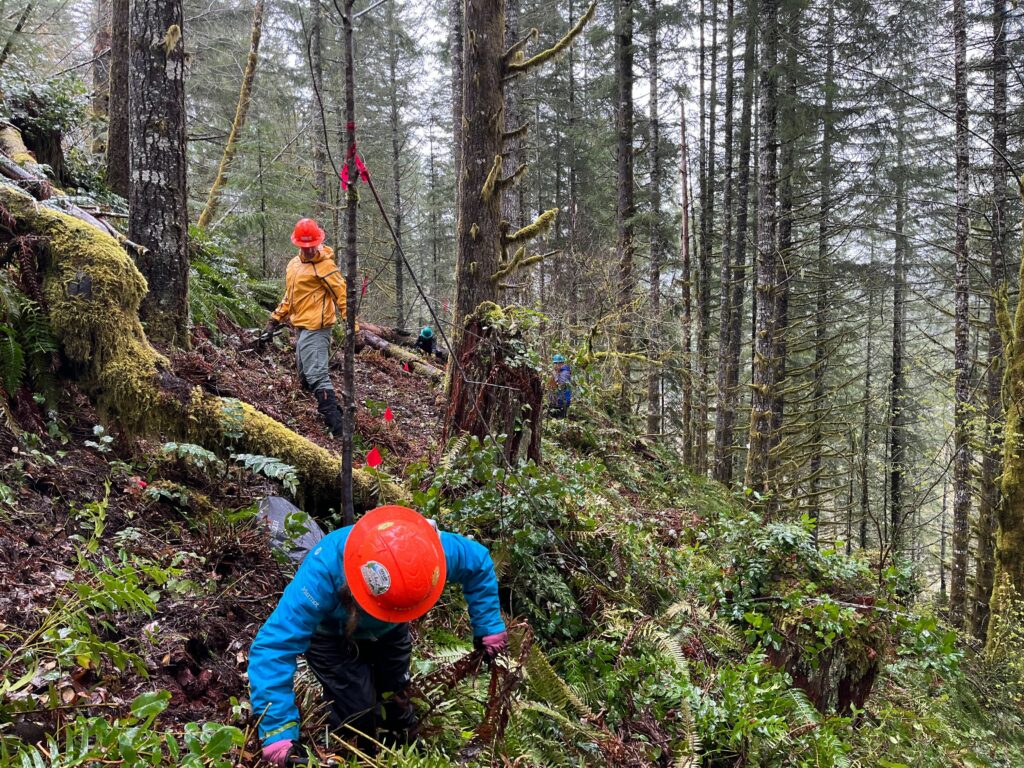 TKO has been running about one crew per week scratching out the beginning of the trail. I myself have been leading some of these crews. The unseasonal snow in April forced us to cancel a few events, and other days the weather forecast was dismal, but we forged ahead anyway and were rewarded with relatively mild weather, with occasional sprinkles and sun breaks.

Our volunteer crews have been a mix of experienced TKO regulars as well as trail runners, some of whom were fulfilling prerequisite trail work to participate in trail running events, and some who are looking forward to having six more miles of trail to run. 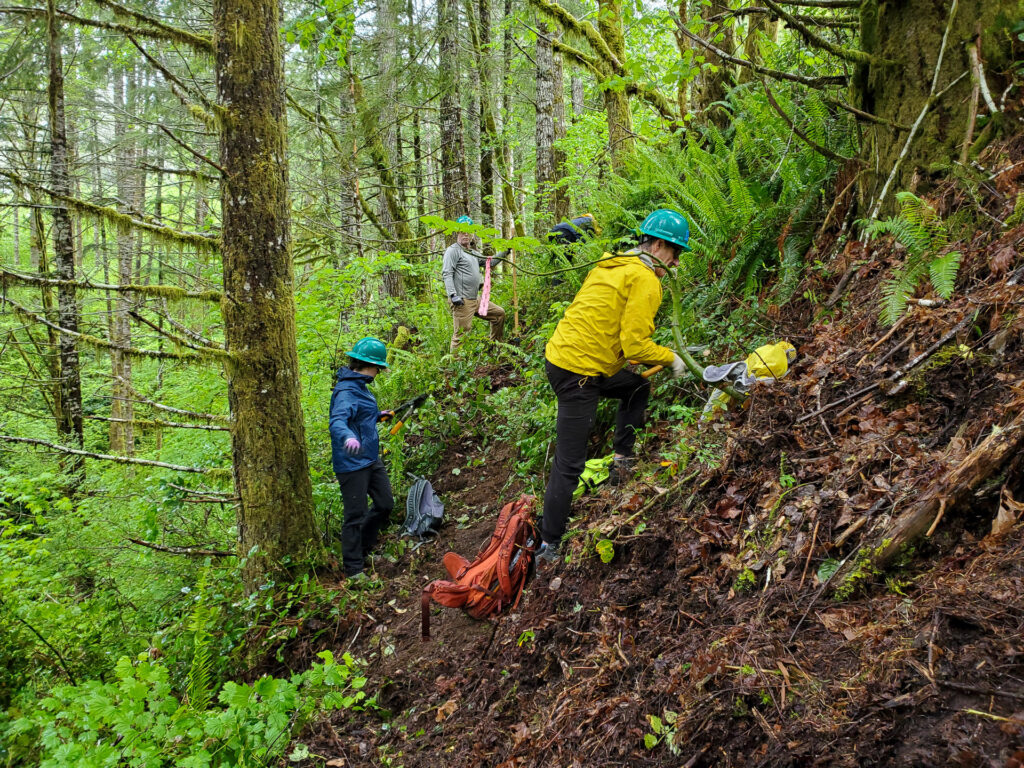 Trail work is often a matter of overcoming unexpected challenges in a safe manner. You might be surprised to know how difficult it is to hike a trail that isn’t there yet, compared to after a first pass of removing the Salal, Oregon Grape, and Sword Ferns. The work itself is not strenuous since the focus is just trimming back vegetation with loppers. However, the work is not simple! There are ravines where we have to scramble over large logs, and steep slopes where we have to step cautiously. At one point, it was too dangerous to proceed, and I noted the location for further assessment. The portion of the route we have been working on recently parallels a lightly used road, but it is impossible in many places to scramble up to the road. Elk trails provide access in some places.

As of early June, we have completed about 1 out of the 6 miles of corridor clearing, and we plan to keep at it all summer. It could easily take another year or two before the new segment is ready to be opened. In the meantime, there will be a lot of good times meeting new people, getting a great and varied workout, and making plenty of jokes about clearing the path through to “Idiotville”.