Interview: Steph Noll and the Launch of the Oregon Trails Coalition

Stephanie Noll is a leading force behind the Oregon Trails Coalition (OTC), an organization conceived in 2016 and formally incorporated in 2018 to advocate for trails throughout the state and to bring together agencies and organizations working with trails.

Trailkeepers of Oregon serves as OTC’s fiscal sponsor. In an interview with Trailkeepers, Steph describes the origins of OTC and the work to be done to build a greater statewide trail network in Oregon.

How did the Oregon Trails Coalition come into being?

For me, it goes back to the days when I worked for the Bicycle Transportation Alliance, now The Street Trust. A bicycle and pedestrian advocacy organization and trails-related organizations seemed like natural allies, and I wasn’t aware of any statewide trails organization doing advocacy or working on funding or policy-related issues, outside of specific “friends of trails” groups in specific regions. It’s pretty funny when you Google “Oregon trails” anything, you come up with all kinds of things about the Oregon Trail and the Oregon Trail video game.

Federal funding designated for trails had dwindled, and Oregon’s trails were receiving less and less funding. Professionally I had the funding and policy perspective, and personally I got more interested in focusing on trails as my kids got more mobile. I have twin eight-year-old boys. I’ve always liked hiking and camping, and I’d also done a lot of bike touring. But once I had kids, I lost all interest in biking on the highway system or rural roads. I suddenly felt more aware of my own mortality and got more passionate about ways to adventure off the road with my kids.

In fall of 2016 Travel Oregon was in the early stages of launching an Oregon outdoor recreation initiative. I had left my job at The Street Trust and wanted to work on trails. I approached Travel Oregon to learn more about their goals, and shared with them my hypothesis that Oregon needed more organization on the statewide level—not necessarily a new organization—to bring together the trails community as advocates for funding and as a network of professionals working together.

They funded a small research report. I interviewed more than 30 trails stakeholders from around the state—land managers, volunteer organizations, public agency folks, advocates, a wide range of folks across Oregon—about their goals for the trails they were maintaining or trying to develop, and the barriers to achieving their goals. That was the first time I sat down with Tom Kloster and learned about Trailkeepers of Oregon.

When I did that initial report, I learned that the most universal needs across the state were the need to convene the trails community and the need for more trails. People who worked in different public agencies didn’t have enough opportunities to talk to each other. Volunteer organizations felt there weren’t enough conduits to build relationships with public agencies. There was a big desire to convene for relationship building and information sharing and opportunities to collaborate. The other need that was universal across the board was the need for more funding to develop and maintain trails.

I wasn’t out to launch a new organization. I was wondering if there was an existing organization within which this effort to coordinate partners across the state could live. Through that series of conversations, Trailkeepers of Oregon seemed like the most natural fit of everyone I talked to. It was a young organization and small, with a statewide vision—not focused on a specific trail or region, but filling in the stewardship gaps statewide, for any trail that wasn’t a PCTA with its own organization. 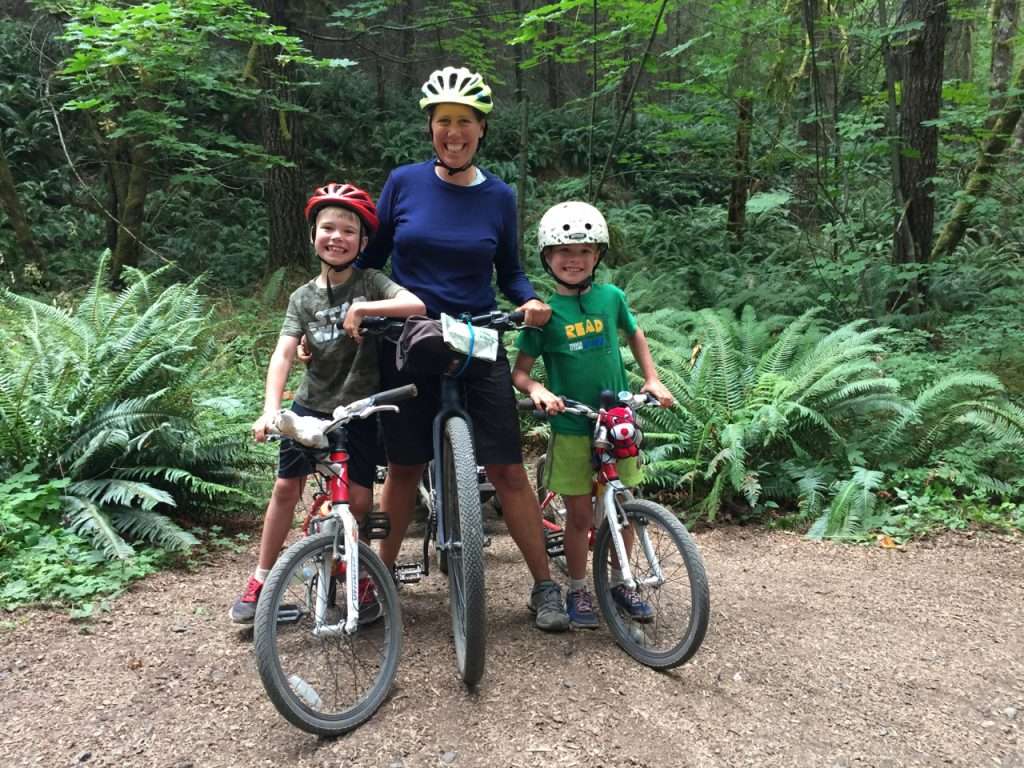 Who is the OTC?

We’re a coalition of public agencies, trails enthusiasts, volunteers, and professionals. I’m the staff for the coalition. Following the initial conversations with thirty folks, Travel Oregon invested seed funding to host a trails summit and do some coalition development. In 2017 we had our first Oregon Trails Summit, bringing together 200 people in Bend. Trailkeepers of Oregon offered to be the home for that organizing effort, serving as the fiscal sponsor. It was a full-day summit, and the last two hours were kind of a big strategic planning meeting. From that meeting and the follow-up survey, we felt we had a clear direction. There was a desire for the summit to be an annual event, with other opportunities to convene as well, with regional get-togethers and webinars. Folks wanted to learn about what was happening in other regions of the state, especially about other partnerships between land managers and volunteer groups. And folks wanted to have an organized presence in Salem. There wasn’t anyone going to our public agencies and legislature in Salem saying, “Hey, trails are really important to us as an Oregon community.”

We had an open call for advisory committee members. With the combination of people raising their hands to volunteer and some additional recruitment for a diverse group, we went forward with an advisory committee of initially about 16 people. We had reps from the US Forest Service, Bureau of Land Management [BLM], Oregon State Parks, Oregon Department of Transportation, Trailkeepers, the mountain biking group Central Oregon Trail Alliance, Oregon Equestrian Trails, Oregon State Snowmobile Association, and REI—a pretty broad group. That committee worked to develop the coalition’s mission, values, broad goals, and structure. TKO graciously offered to be the incubator for the coalition effort, and to this day still is the fiscal sponsor. The summit is funded by sponsorships and registration. Travel Oregon continues to provide seed funding for coalition development, but we’re transitioning to look to our coalition supporters to fund future work. 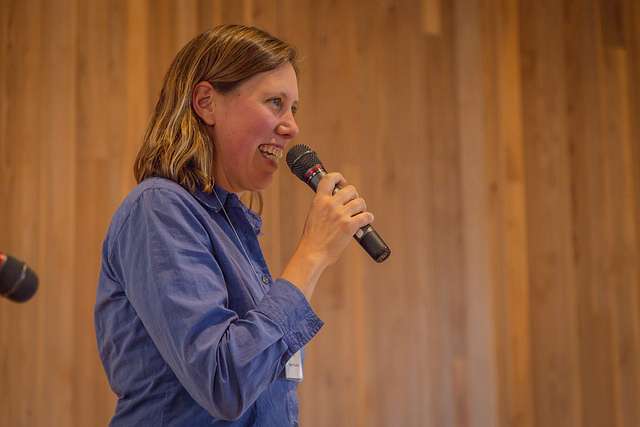 The second conference was last year, also in Bend. How would you characterize the progress since the first conference?

We had two full days of programming at the second summit, in October 2018. We’d gone from “Hey, maybe we should start a coalition!” to “Our coalition has officially incorporated as a coalition! We have all of our guiding documents, clear goals, and an active advocacy program.” With 26 current advisory board members, our call for additional applications remains open, and the board is reviewing those at least twice a year.

With a really broad coalition, there’s much that folks have in common, but there are thorny issues too. At least for the beginning of our coalition’s existence, we’ve decided that our advocacy will stay focused on preserving and increasing trails funding in Oregon. For any other thorny issue around access or kinds of trails, the coalition won’t take a position but can serve as a forum to talk about it or educate each other. 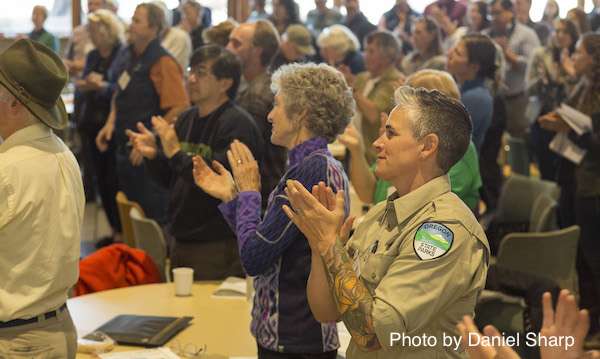 You’re saying your primary purpose right now is to increase trails funding across the board. Are you talking specifically about something like Travel Oregon? Are you going to be lobbying with individual agencies to increase the trails share of their budgets?

We’re working at lots of different levels. In federal advocacy, we’re advocating for full authorization and full funding of the Land and Water Conservation Fund. We also made several federal budget allocation requests related to Forest Service, BLM, and National Parks lands. On federal issues we generally follow the lead of national partners like American Trails and the Back Country Horsemen of America. In February we had our first Oregon legislative action day in partnership with Oregon Outdoors.

In the Portland metro region we’re active in advocating for trails in the Metro parks and nature bond renewal and the planned 2020 transportation funding measure. We’ve been hosting regional advocacy roundtables with partners and submitted a letter to the new Metro council about our priorities for seeing trails funded. 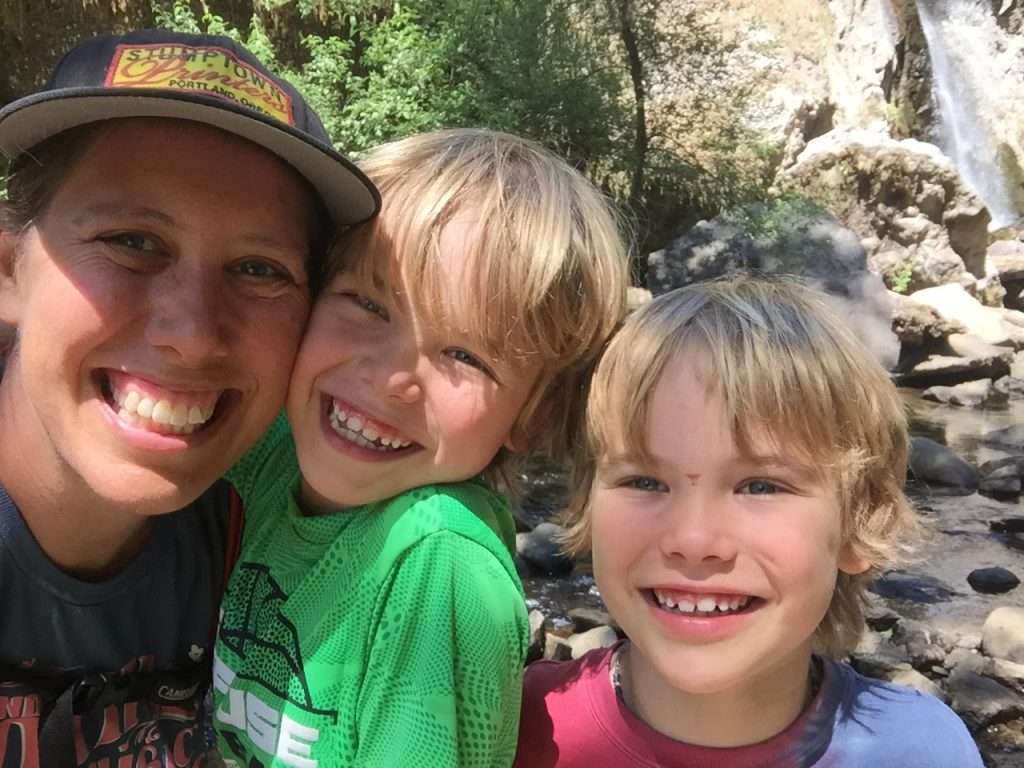 How do you see the Oregon Trails Coalition playing a role in facilitating relationships with the Forest Service and state forest districts? The way it’s done now it’s an individual thing—someone goes out and talks to the trails ranger. TKO has varying degrees of relationships, and there are parts of the state where we have no relationship whatsoever.

The annual summit gives an opportunity for someone who works for a specific ranger district in one national forest to hear what is happening with TKO and the Forest Service in the Columbia Gorge National Scenic Area and Mount Hood National Forest. Folks on the individual ranger district level can hear, OK, this is how it’s working somewhere else in the state. I think the role of the coalition is twofold: sharing local stories so other people can build similar relationships without having to make it up from scratch, and working with managers on the regional level on broader partnerships and removing red tape.

How do TKO and the Oregon Trails Coalition compare to what’s happening with trails advocacy in Washington state, say with the Washington Trails Association?

WTA is a powerhouse, and they do an amazing amount of awesome work, but they are also part of a larger advocacy infrastructure. Part of what they’re able to accomplish is because they aren’t just a strong organization out there by themselves, but they have other staffed organizations that they’re working with on advocacy efforts as well. There’s also a Washington State Trails Coalition, which is the entity that puts on their statewide conference, and there’s the Washington Wildlife and Recreation Coalition, which is a staffed advocacy organization that partners with WTA. Washington has a staffed statewide mountain biking organization called Evergreen. So when I think about the coalition in Oregon, I think of TKO as mapping most directly to WTA, and the Oregon Trails Coalition as a hybrid between the Washington State Trails Coalition and the Washington Wildlife and Recreation Coalition. Washington doesn’t have the convener and the advocate under the same organization umbrella; they have two separate organizations. We’re moving forward with a dual model.

Five, ten, twenty years from now, how do you see this statewide trails coalition playing out?

Our goal is to lift all the boats, for all the organizations and public agencies that are working on trails. Our goal is to make it easier for them to do what they’re doing—to break open funding for their projects, and to create a relationship infrastructure in the state. I imagine Trailkeepers and the Trails Coalition growing up together. I see Trailkeepers of Oregon as a larger organization with a truly statewide presence helping to set a standard for trail stewardship—so that land managers can trust local volunteer groups, and there’s a sense of a shared standard across the state for trail maintenance. I see Trailkeepers as the hub for stewardship. I see the Trails Coalition as the home for the state summit that covers all the other trails issues that don’t fit into boots-on-the-ground stewardship, and lets all the groups and agencies come together. Ten years down the road I hope that we’re all enjoying the fruits of a really successful statewide funding measure for trails. I think that will most likely come as part of a larger recreation and conservation measure, either a big legislative campaign or a big ballot measure campaign. We’re talking about tens of millions of more dollars on the table for trails each year in Oregon.