How to Saw a Log by Hand to Clear a Trail

By Paul Gerald, Board President, Trailkeepers of Oregon

Almost every trail you’ll ever hike will take you past a sawed-off log. And while you are certainly aware that somebody sawed off that log, you probably have no idea how complicated it might have been, nor how much work.

I certainly didn’t, until I joined a Trailkeepers of Oregon crew on Mount Hood’s Old Vista Ridge Trail. There, under the expert leadership of crew leader Pat Keavney, my crewmates and I removed four logs from the trail—and learned a ton. I also had a blast.

Logs on trails, aka “blowdown,” are quite common, especially in spring and early summer, after winter storms have done their work. If it’s in a wilderness area like Old Vista Ridge, blowdown has to be cut out by hand—no chainsaws are allowed in wilderness areas. Here’s how it works.

First you assess the whole area for potential dangers, like something that might fall or roll on you while or after you cut. Assessing dangers is always a good idea when out hiking, for your own safety and to alert TKO or the land manager about work that needs to be done.

Next you have to clear the area so sawyers can get to the log. This involves digging, brushing, hauling, and hand-sawing branches. Then you have to plan for where the sawed section will go: Is it going to fall? Roll? Head downhill to where it might hurt somebody? Precautions have to be taken to be sure the area is safe during and after the work.

You’re almost ready to cut, but you have to anticipate which way the section of log will come out and then work out the angles so that it does so easily. In short, this means the bottom and downhill sides of the log need to be slightly wider than the top and uphill sides, so it pops out when you’re done cutting.

To prepare the log for cutting, you also need to remove the bark, which could have dirt in it—dirt that has mineral elements that would damage the saw blade. And one thing you’ll learn on a saw crew is that sawyers love their saws and really want to take good care of them. Getting one sharpened is a difficult and expensive process. And replacing one? Let’s not think about it. 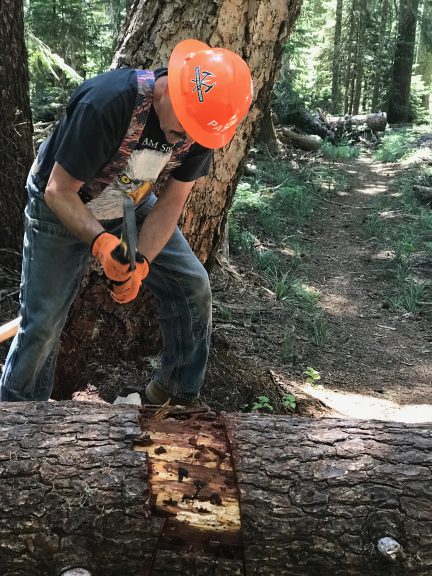 Clearing the bark from the log to prepare it for the saw. (Photo by Paul Gerald)

Depending on the log’s size, you may be using a one- or two-person crosscut saw, an iconic implement that requires two people working in tandem. First you “air saw” just above the log, pulling the blade back and forth a short distance and just above the surface of the log. Then you steadily lower it onto the log, starting your groove; once that is done, you settle into the classic back-and-forth motion (if you’re doing it right) that has been seen and heard in these woods for 150 years.

It’s a delicate process, with each person pulling the saw in a straight line so that it glides easily through the log and, perhaps, “sings.” You don’t push, because that can bend (and potentially break) the saw and make your crew leader rather uptight. You also have to account for the possible “binding” of the saw, which occurs when the blade gets stuck in the log as the log settles. To avoid this, you will hammer wedges into the cut above the blade, keeping the crack—also known as the kerf—open.

Getting the groove started after briefly air-sawing just above the log. (Photo by Paul Gerald)

Sawyers switch off regularly to avoid fatigue, and then as the cut is nearing completion, it’s time to think about that thing coming out. Often the person on the downhill side will get out of the way, leaving the uphill sawyer to finish the job alone. 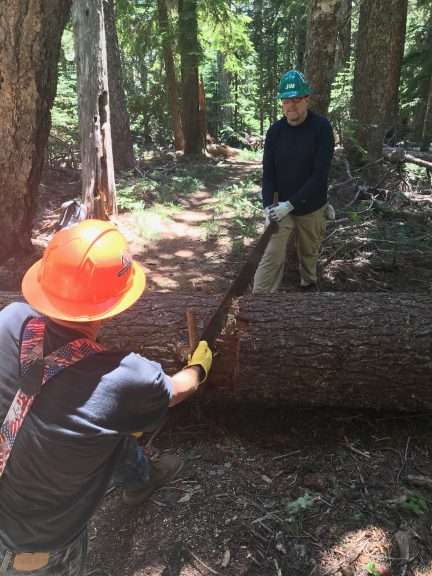 And that’s just one cut! Some logs require several to remove. But in the classic scene—a straight log lying right across the trail—two cuts are enough. At the end of the second one, and again if you’re doing it right, the cut section drops out and onto the trail. You will have placed something to keep it from rolling into a dangerous area, or perhaps you cleared out the area below to let it roll out of the way. Either way, it’s a satisfying moment. If the cut section needs to be moved, you move it with some combination of hands, feet, ropes, and pry bars—all the while taking great care to put it where you want it. This part can be dirty, tiring, and exhilarating!

Wedges are inserted to keep the log from closing down on top of the saw and binding it. (Photo by Paul Gerald)

And when all this is done, voilà! There is now a nice, clear path through where once there was a log in the way. Previously, hikers had to stop or crawl over a log, but now they can just stroll on through—all because of you, the TKO saw crew! Then, like a conquering hero, you put a guard on the blades of your saw, sling it over your shoulder, and head off up the trail, looking for the next log to clear out. It’s a very satisfying feeling!

After the section is cut, it often has to be removed—in this case with leg power. (Photo by Paul Gerald)

The next time you stroll past a sawed-off log, especially in wilderness, take a moment to feel some gratitude for the saw crew that did it. See if you can spot the piece they took out, and imagine what it took to get it there. As you now know, they put in a lot of time and effort, so you don’t have to—it often takes three or four hours to clear a trail of a two-foot log across it! And maybe come see us on a TKO trail crew some day to learn more and get that sense of satisfaction for yourself.

And voilà! Where there was a log, now there is a clear trail. Thanks, saw crew! (Photo by Paul Gerald)