Hikes of the Season: Colorful Fall Destinations in Portland

In Japan, an entire tourist industry is based on kōyōgari, or momijigari, “fall leaves sightseeing” (the two words are different pronunciations of the same characters). People flock to the countryside and temple complexes to appreciate the turning of the colors. Likewise, the northeastern states of the US experience a significant influx of visitors from late September into October for the same purpose.

Here in the Pacific Northwest, it’s a little more difficult to find concentrated displays of chlorophyll breakdown, when the dominant green of a leaf, which is instrumental in the manufacture of nutrients for the plant, fades away due to the shorter days, and other pigments come to the fore. In an urban area like Portland, those intent on momijigari have the luxury of visiting displays of colorful aliens brought in from around the world to beautify gardens and parks as well as the predominantly yellow palette of our native maples, cottonwoods, and Oregon ash. Following are four places to go in the Portland urban area at peak season, usually from the middle to the end of October. It’s good to keep in mind that leaves will begin falling from the trees more rapidly after the first frost, which will literally kill the leaf colors by destroying their cell structure. 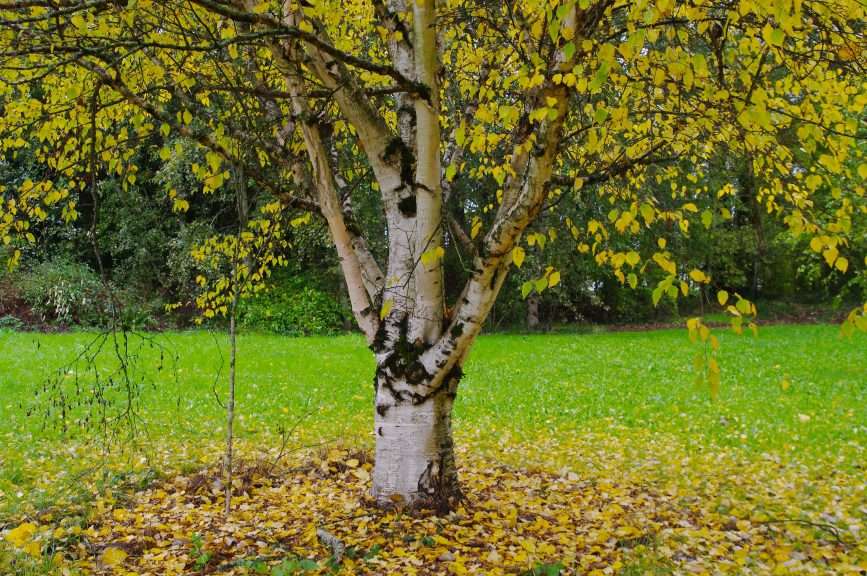 This city park was originally part of Columbia Middle School, which served a low-income neighborhood in northeast Portland. Students were engaged in projects to enhance their appreciation of both agriculture and horticulture on land that was slated for a future high school. There was a vegetable garden, an orchard, and the beginnings of a “trees of the 50 states” project. The middle school was closed in 1983, however, and the plot began to revert to blackberries and transient camps. Portland Parks and Recreation bought 28.8 acres of the property in 1999, and together with local volunteer groups, a rehabilitation of the park has been underway, with a management plan in place and the 50 state trees project revived.

It’s a small space, good for taking your toddler to kick through the bright leaves on a blustery fall day. Look for sugar maples, red maples, and sweet gums near the picnic area. There are white birches, oaks, sycamores, and eastern cottonwoods. A ditch, originally dug to drain what was once an extensive wetland, runs long the property, and here you’ll see the subtler fall tones of native riparian species: black cottonwood, highbush cranberry, red osier dogwood, Pacific willow, and red alder. Once the leaves have fallen, the crimson twigs of the dogwood and the royal yellow branches of the willow offer relief in drab thickets. 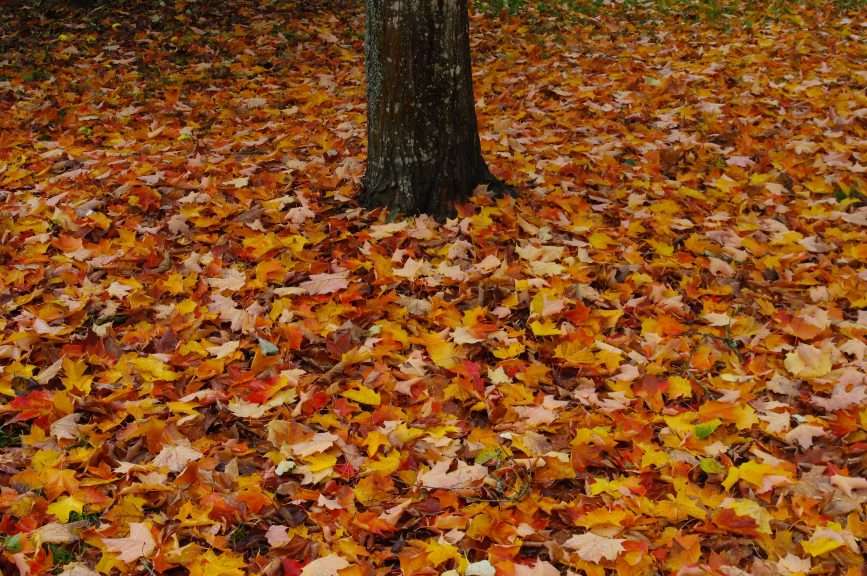 Once Multnomah County’s “poor farm,” the 321 acres that are now Hoyt Arboretum were taken over by the city in 1928, and an ambitious layout was implemented so that plants from all over the world could be displayed according to their taxonomic classification. In broad terms, this means that the conifers are on the west side of Fairview Boulevard and the flowering trees, most of them deciduous, on the east side. Your fall visit should, therefore, focus on the east side, where the trail names (Beech, Oak, Cherry, etc.) indicate their principal occupants. 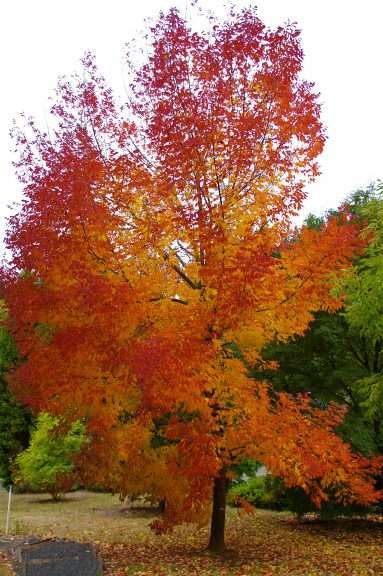 A flowering ash in the Hoyt Arboretum. (Photo by John Sparks)

The species on view are too numerous to mention individually, but a few favorites should be mentioned. Check out the flowering ashes near the Overlook Trail. There are bright vermilion tupelo trees nearby. Birches, with their yellow foliage supplementing pinkish and white paper-like bark, and beeches can be found on the Magnolia and Beech trails. Pink and yellow tones distinguish some of the cherries and hawthorns on the higher slopes above Knights Boulevard. Up here also grow colorful sumacs and mountain ash. Lower down in the same area are more birches and the dazzling oranges of the sugar maples. The Pacific madrones on the same hillside will be displaying their strawberry-colored berries, and some magnolias on the Taylor Trail exhibit large pink-and-red fruit cones. 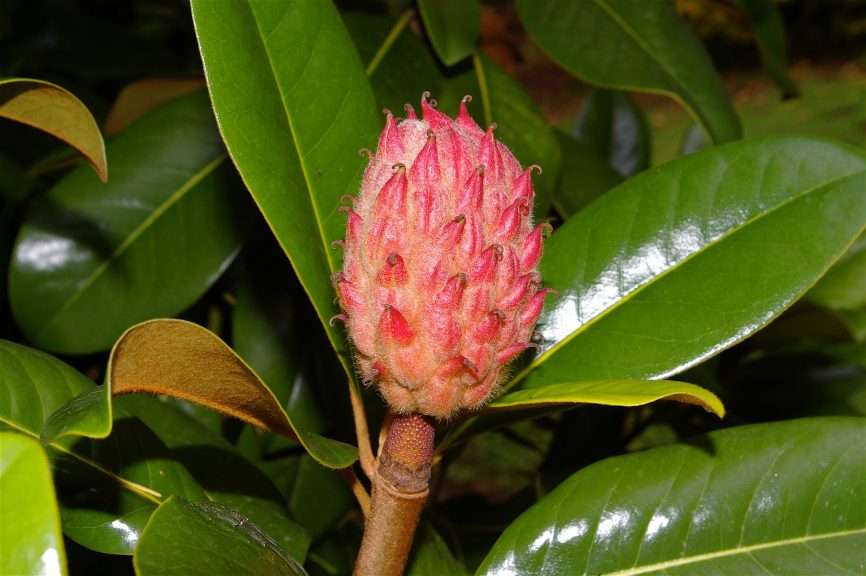 Fruit cone of a southern magnolia in the Hoyt Arboretum. (Photo by John Sparks)

The trails of Marquam Nature Park are the go-to nature walk for residents of southwest Portland. Essentially, the forested park is divided into two habitats: a northern portion centered on two gulches carved by Marquam Creek, and a southern section on a 400-foot slope leading down to Terwilliger Boulevard. The trail network between Marquam Hill Road and Terwilliger was expanded in 2014 to provide more loop and access options. 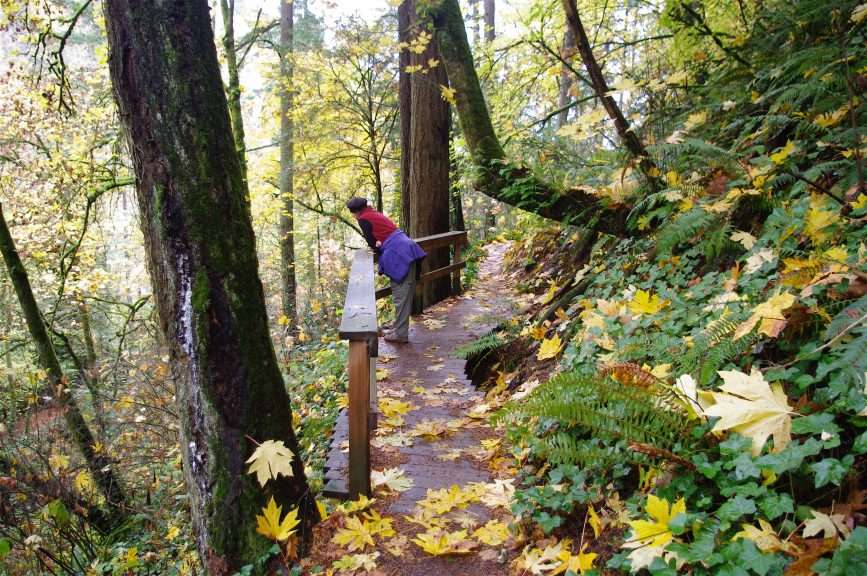 If you begin a fall walk at the Marquam Shelter, you’ll be immediately struck by two features: the colorful community-created mosaic (conceived by artist Lynn Takata) around the little amphitheater and the candy red (crepe pink on their undersides) carpet of red maple leaves. These are a treat for residents of the West, but the red maple is considered the most common native tree in the eastern part of the country. Once you leave the shelter area, you will be hiking under a canopy of species native to Oregon with typical urban invasives—English ivy, English laurel, holly, blackberry—scattered through the understory. The leaves of three native species gratify your momijigari urges here. Red alders display shades of yellow and brown. In places, a bright yellow understory of vine maple provides almost garish splashes of light that highlight slender moss-draped boughs. The impressive plate-sized leaves of bigleaf maple are often mottled with a circular infestation of Rhytisma punctatum, or tar-spot fungus. These patches consist of black speckles which can be surrounded by a halo of residual green chlorophyll. 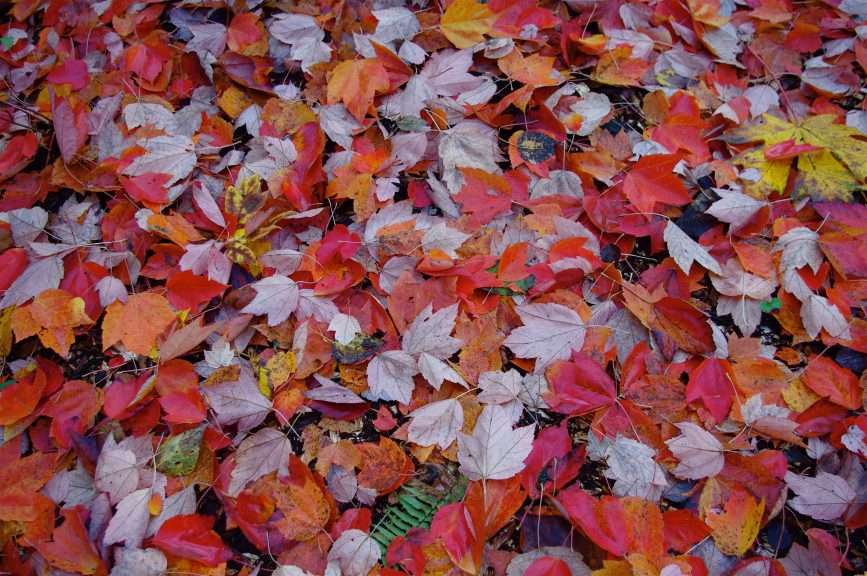 A carpet of red maple leaves near the shelter in Marquam Nature Park. (Photo by John Sparks)

Portlanders can be proud that Forest Park constitutes the largest forested natural area within a city in the United States. This 8 ½ mile loop takes advantages of the two longest trails in the park: the Wildwood and Maple trails. With over 1,000 feet of elevation gain, the loop also takes a little more energy than the typical urban hike. You’ll be in the somewhat less-trafficked central section of the park with a less obvious incursion of invasive species in the understory. 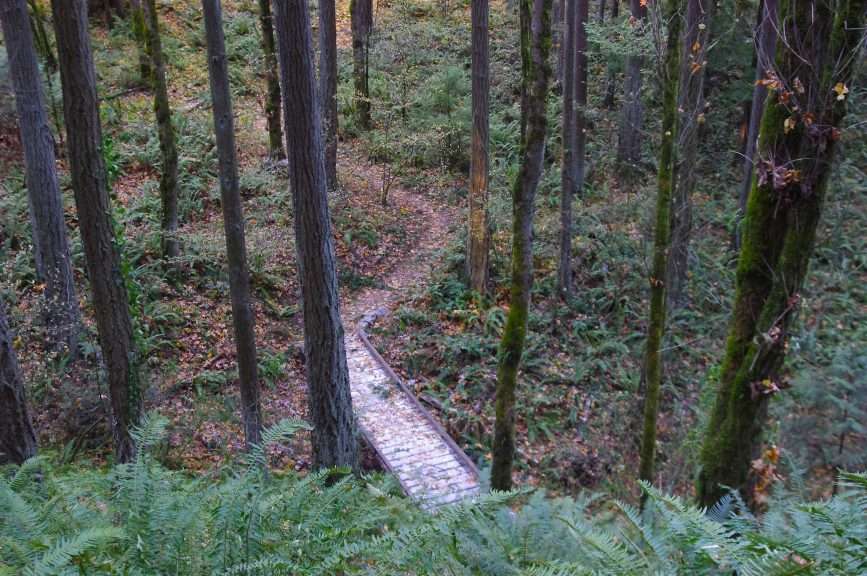 Looking down on a footbridge on the Maple Trail, Forest Park. (Photo by John Sparks)

The most impressive trees on this route are not the deciduous maples and alders, but a few old-growth Douglas firs on Munger Creek, a tributary of Rocking Chair Creek, that somehow escaped logging. The largest of these is at least five feet in diameter. Groves of red alder tend to dominate creek valleys. These trees are quick to colonize slopes opened up by fire or logging, and their nitrogen-fixing properties are essential in the regeneration cycle. Bigleaf maple leaves begin to lay a thick carpet on the park’s trail ways in mid-fall. Vine maples, a favorite forage plant for both deer and elk, also display on the aptly named Maple Trail. Here they will all be a normal yellow because these plants are in an ideal environment: a well-watered slope under a canopy of conifers filtering dappled sunlight. The red vine maple leaves so coveted by nature photographers are produced by stressed plants in habitats that are more extreme for the species, often open rocky slopes with poor soils, less moisture, and no shade. 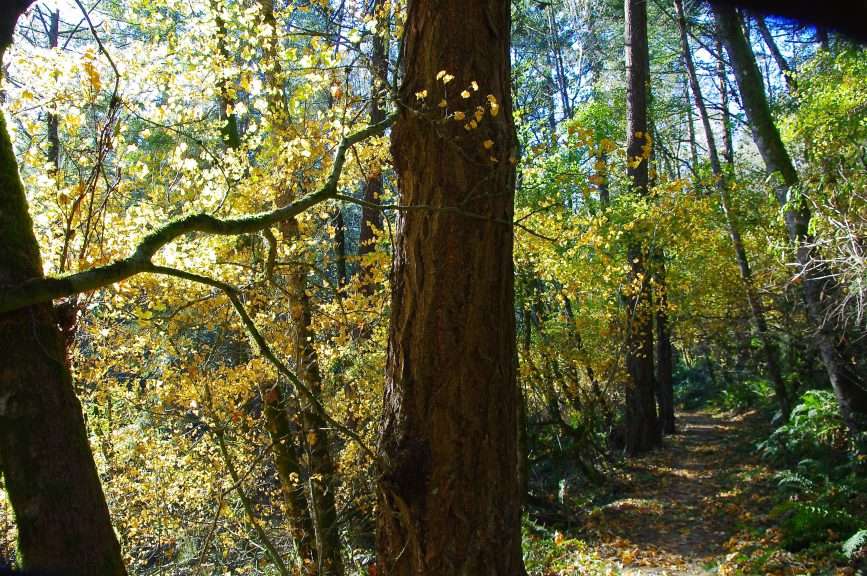