Hike of the Season: Potato Butte 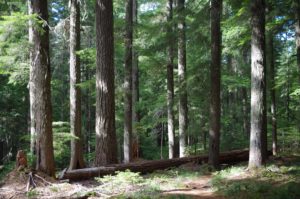 Old-growth forest on the lower section of the Red Lake Trail.

There’s a back way into the Olallie Lake Scenic Area, and it requires the relief of driving decent gravel for less than a mile as compared to the dusty, sometimes spine-shattering washboard experience of getting in to the often crowded shores of Olallie Lake itself. The semi-secret is the Red Lake Trail #719. The hike does require a little elevation gain up the escarpment above the Clackamas River, but it delivers you to a series of backcountry lakes with camp spots—Red, Averill, Wall, Sheep, and Fork lakes—which are some of the less-visited in the area. In fact, the trail still exhibits some of the old varnished trail signs of a past age and even one marker referencing the Skyline Trail, precursor to the Pacific Crest Trail! 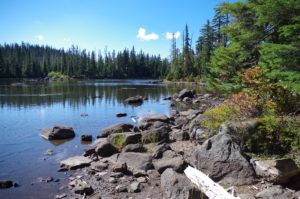 The rocky shore of Red Lake

From the Red Lake Trailhead, you’ll be hiking uphill for a stretch, but very soon you’ll be gazing up at a canopy of big old-growth Douglas firs and western hemlocks. Yes, you’ll have to cross a power line corridor and the trail tread is often rocky and loose, but soon huckleberry bushes dominate the understory as you get close to Red Lake after 1 ½ miles. In the early fall, the delicious black huckleberries (Vaccinium membranaceum) are long gone, but there will still be low-growing bog blueberries (Vaccinium uliginosum), which contribute most of the fall color here. If there’s been a freeze already, these berries will be mealy and tasteless; otherwise, you can still enjoy their lightly medicinal sweetness (“Olallie” is Chinook jargon for “berry”).

The flat stretch past Averill and Wall lakes is dominated by lodgepole pine and the russet blueberry carpet. You’ll probably see some bear scat: The creatures are here to feast on the last ripe fruits of the year. When you come to Sheep Lake, there’s a splendid view towards Olallie Butte; also here is the junction with the Potato Butte Trail. To gain a higher vantage point over the spread of the Olallie Lakes area, make a left. 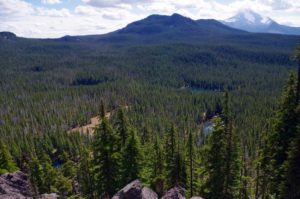 The three-quarter-mile Potato Butte Trail, however, generally sees little maintenance, and you may have to step over a few logs. It’s a flat hike in to the base of Potato Butte, but before that you’ll skirt a dry meadow, one of the so-called Spud Lakes that is a sheet of water in early summer. Two other Spud Lakes, one just north and one just south of the trail, are out of sight but easily reached. Each one has a secluded and little-used campsite. Big Spud, the one south of the trail, is deep enough for a cool dip on a warm day. The trail to the summit of Potato Butte is sketchy in places: A friend of mine recently lost the track and ended up beyond the summit sign before he realized he had been off trail! The actual summit offers limited views, but continue north a little, and you’ll get a vista to Mount Hood, with Sisi Butte looming in the foreground. The real key to Potato Butte, however, is to backtrack along the trail about 180 yards and look for a spur leading east to a clear vista across the landscape to Mount Jefferson. The spill of dark boulders below you is what gave Potato Butte its name: Someone evidently thought this pile of talus resembled a cascade of spuds!

In the fall, nights will be cold but the camping will be good through October. Some prefer to begin the hike to the Red Lakes area at the Lower Lake Trailhead (yes, enduring that washboard road), taking the Fish Lake and Lodgepole trails to meet the Red Lake Trail, but it may be a little too cool in the fall to enjoy a dip along the way in Middle Lake, which I consider the best option for a swim among the generally shallow Olallie Lakes. In any case, there will be no mosquitoes, and you can count on fewer fellow visitors!

Factoid: Why All Those Lakes?

While the last continental ice sheet never reached as far as Oregon, smaller mountain ice caps formed in the Cascades, and the Olallie Lakes area was covered by an ice layer up to 1,000 feet thick. Only 20,000 years ago, so much water was frozen in glaciers and ice sheets that the Pacific Coast of Oregon was 400 feet lower than today’s shoreline! The slow grinding movement of the ice gouged depressions that later became more than 200 meltwater lakes, all of them relatively shallow. At the same time, about 15,000 years ago, Mount Jefferson was in its last eruptive phase, so what you hike on is a mixture of glacial till and moraines, Mount Jefferson ash deposits, and exposed andesite bedrock.

Prominences in the area, such as Potato Butte, Double Peaks, and Ruddy Hill, are older volcanic vents weathered by the glaciation. Olallie Butte is a shield volcano with deeply incised cirques on its northeast and southeast slopes. The Olallie plateau is not a “mature” landscape: intermittent creeks meander between the different lakes and sometimes the hydrology is confusing. The last ice age ended about 12,000 years ago, but the landscape continues to sort itself out.