When winter gloom broods over Oregon’s interior, it’s good to keep an eye on the weather forecast for southern Oregon Coast towns like Brookings, Gold Beach, and Port Orford.

From December into March, there may be an extended period of sun and warmth, a reason some characterize this region as the state’s “Banana Belt.” Only six miles north of the California border, Brookings may bask under a week of 70-degree temperatures in January or February! So, if you’re able to get away, consider heading on down to enjoy the balmy days and spectacular coastal scenery. 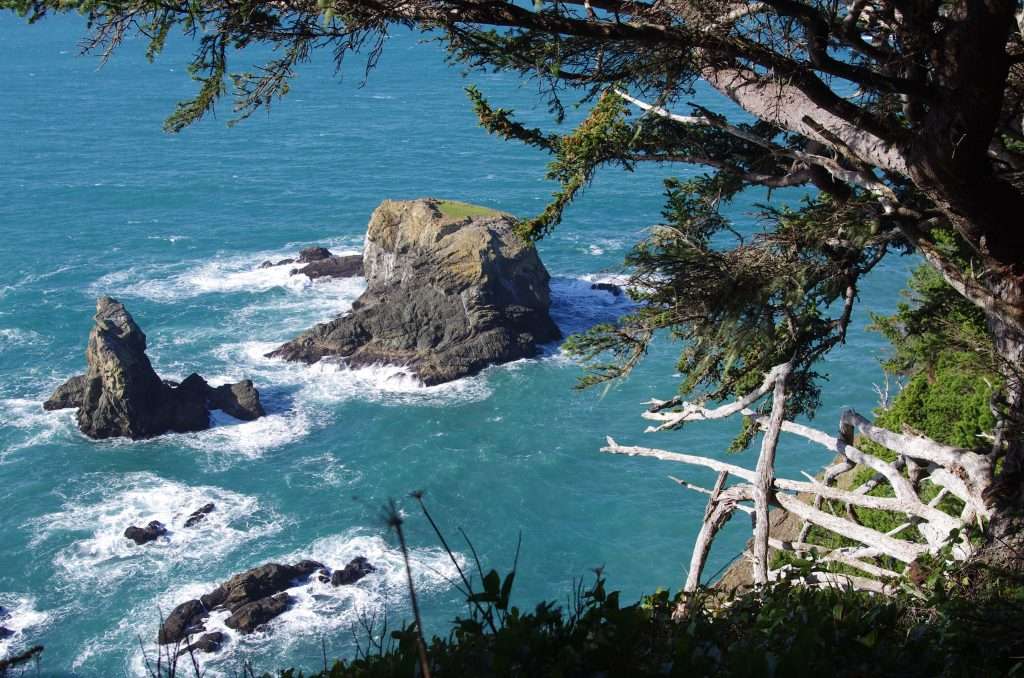 The Oregon Coast Trail runs intermittently along the south coast and serves as the main trail artery. It is often crisscrossed by user paths leading in from Highway 101, which is never far away. My hike of choice for a first visit here is the northern section of the Samuel Boardman State Scenic Corridor, a state park which covers 12 stunning miles of coastal scenery between Gold Beach and Brookings. Samuel H. Boardman, who worked for the State Highway Commission and became Oregon’s first state parks superintendent, is considered the “father” of Oregon’s state parks system. The corridor was one of his final projects. 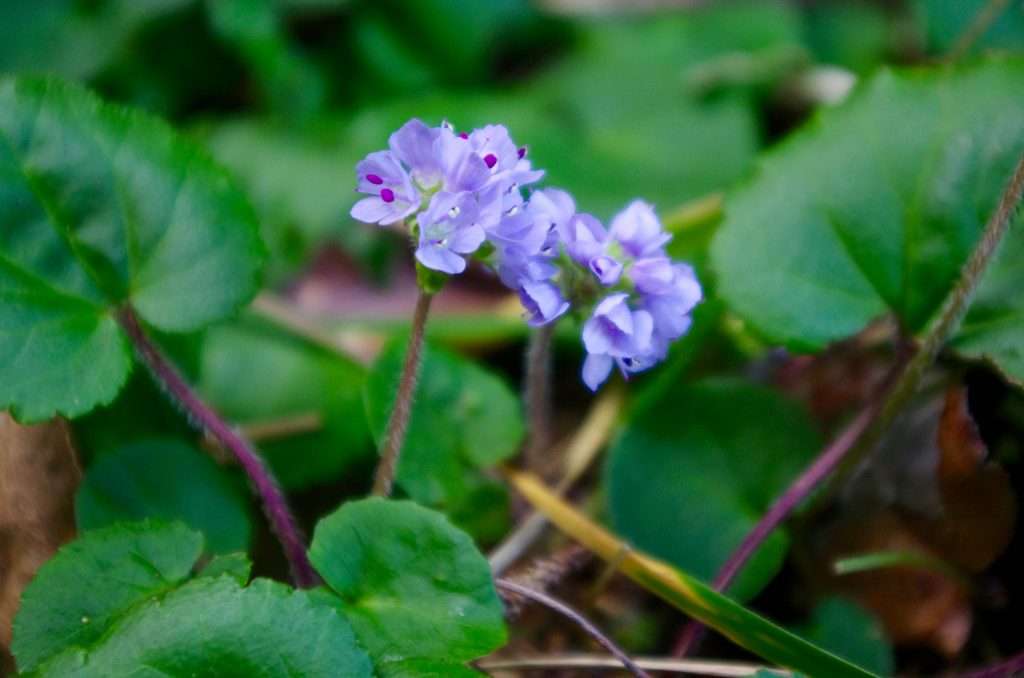 There are a number of trailheads in the park, but the suggested hike begins at the North Island Viewpoint Trailhead, just north of the highest bridge in Oregon, 345-feet high Thomas Creek Bridge, and ends at the Arch Rock Trailhead, which offers views to an array of sea stacks. Other highlights include the grassy headland at Thomas Point; the stack-studded sea off secluded China Beach; a few natural bridges, which are really the mouths of sea caves whose roofs have collapsed; deep and roiling Thunder Rock Cove; and “secret” Miners Beach with its picturesque waterfall. At the trailhead for the natural bridges, you’ll see a plaque honoring Dr. Samuel N. Dicken, a professor of geography at the University of Oregon, who first promoted the idea of the Oregon Coast Trail (OCT) in 1959. In late winter, down in these balmy latitudes, you may encounter blooming violets, salal, evergreen huckleberry, silk tassel, and snow queen. 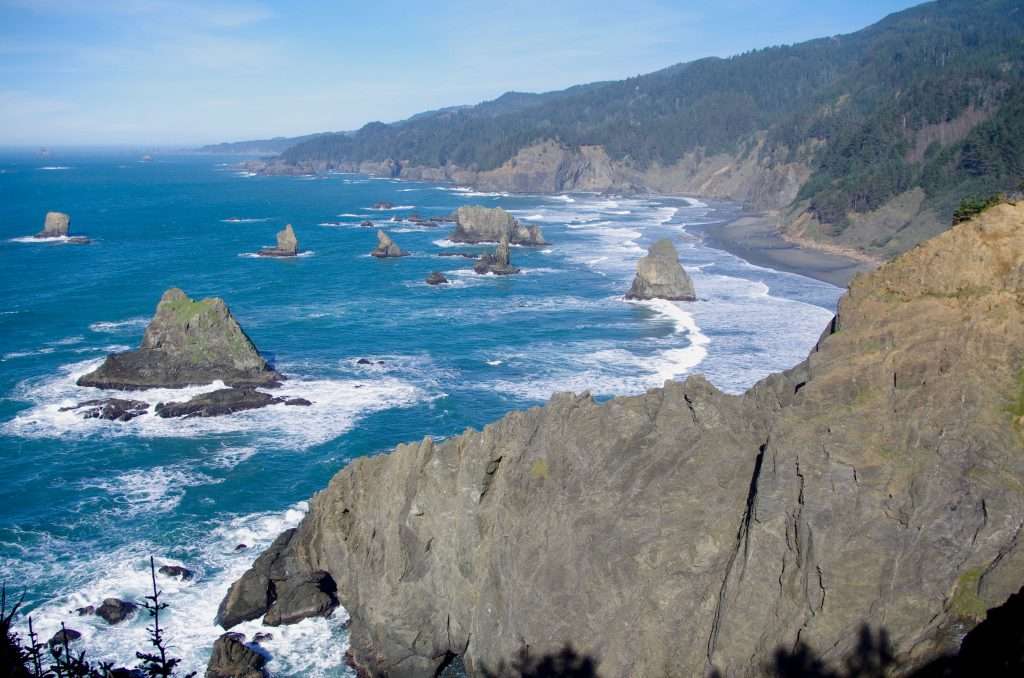 The proximity of Highway 101 may give an illusion of security—in places you have to hike alongside it—but navigation is not always a cinch. The OCT itself is not always clearly marked, and users have created their own, sometimes confusing, paths over generations. Rough, hand-made signs and sketched-out maps posted on trees are the norm here, in addition to a few OCT trail posts. The route gains and loses altitude regularly, winding around steep slopes in a dense and sometimes dark coastal forest of Sitka spruce, red alder, evergreen huckleberry, salal, salmonberry, and sword fern. You have the option of descending to beach level twice. At China Beach, a steep-sided promontory which can only be rounded at low tide separates the ascent and descent routes. Finally, when you get to Arch Rock, a decision has to be made concerning the return. The quickest and most efficient way, other than a car shuttle, is to use the sections of the trail close to Highway 101 and then to walk along the shoulder of the highway itself. This return route is not as risky as it seems because in most places there’s room on the other side of the crash barrier. 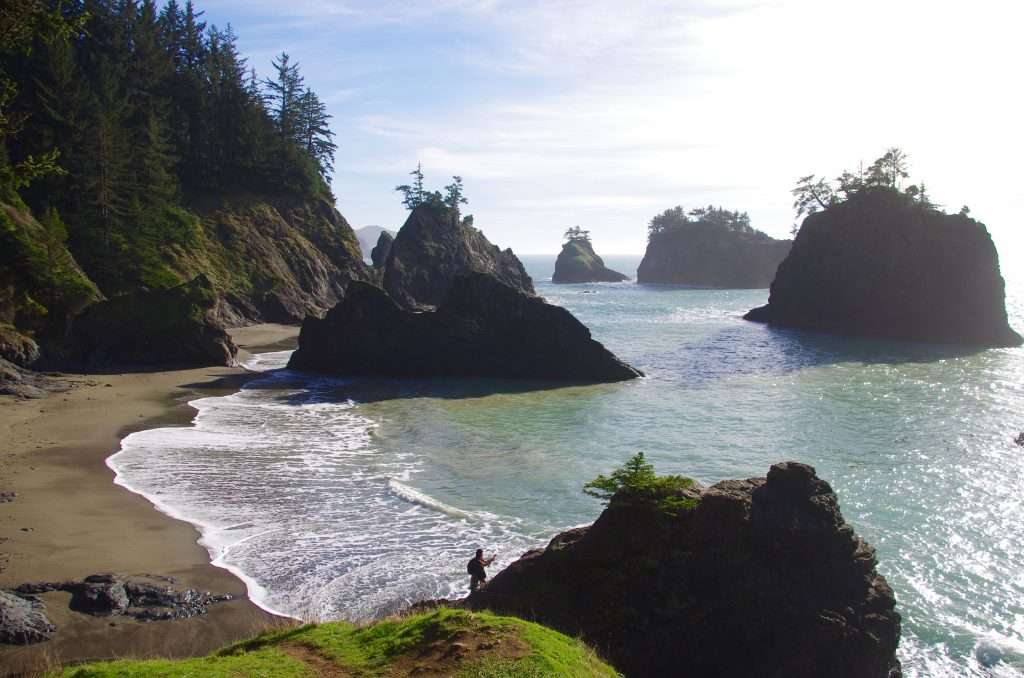 Sea stacks off of Miners Beach. (Photo by John Sparks)

This hike is worth waiting the right moment for—in other words, a fine sunny day with far-reaching views. Bring binoculars to search for sea birds and migrating whales as you take in the rich array of formations from cliff top to sea level. 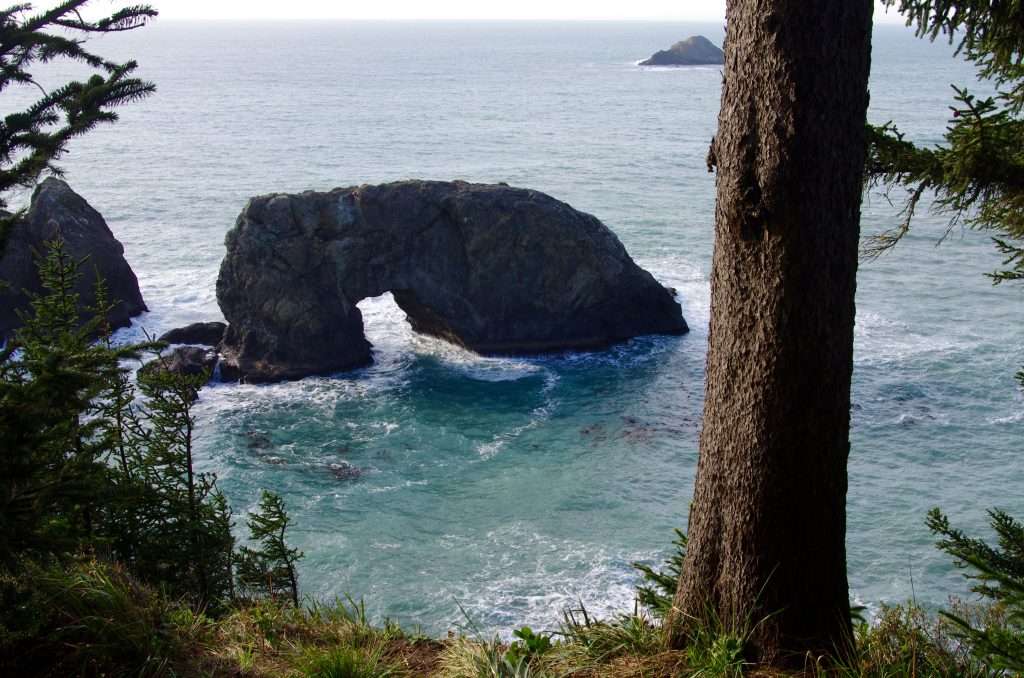 Why All Those Sea Stacks? 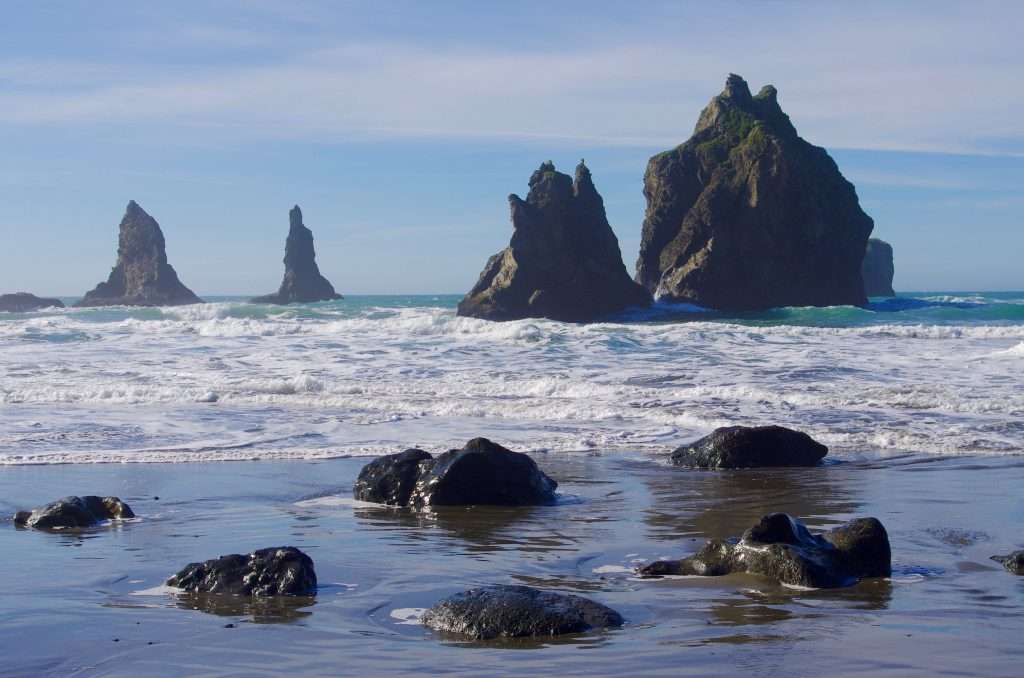 Hundreds of craggy sea stacks and rocky islands lie in the waters off Oregon’s south coast, and others are freestanding on beaches. Some are sedimentary, some metamorphic, and some volcanic in origin. What these formations all have in common is that they were once part of the mainland and are mere remnants of an eroded coastline that once extended farther to the west. Some stacks two miles offshore are capped by sediments only two or three million years old which were deposited when they were part of the shoreline. You can do the simple arithmetic: a Pacific shoreline that has receded two miles in two million years. 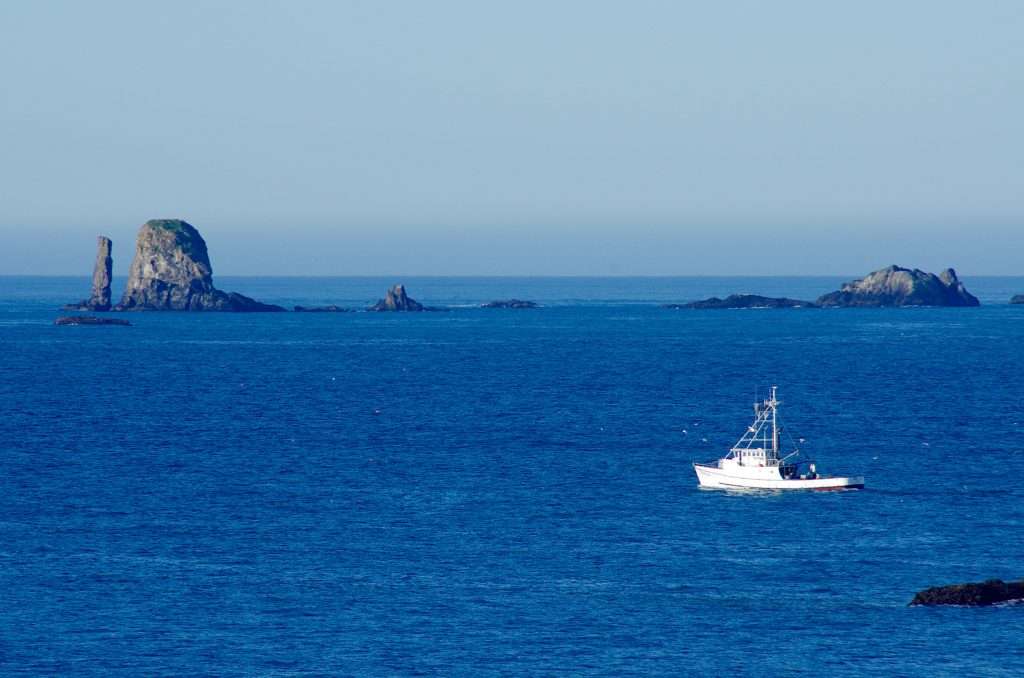 View from Otter Point to Needle Rock and Double Rock on the Rogue River Reef. (Photo by John Sparks)

Wave action attacks and destroys the “soft underbelly” of the land perimeter first, and the stacks are the hardest, most durable rocks remaining. The Otter Point Formation, a complex Late Jurassic (163 to 145 million years ago) mélange, constitutes much of the coastal rock in the Boardman State Scenic Corridor. It has been invaded by younger rhyolite intrusions which are more resistant and stand out as exposed dikes in some locations. Fractures in the rock invite exploitation by the constant onslaught of the waves, and coves and sea caves are formed. In time, cave roofs collapse, and the result is an arch or natural bridge. Each of the current formations will in time disappear to become one of the countless stunted crags that exist below the ocean surface as reefs that attract an abundance of marine life. 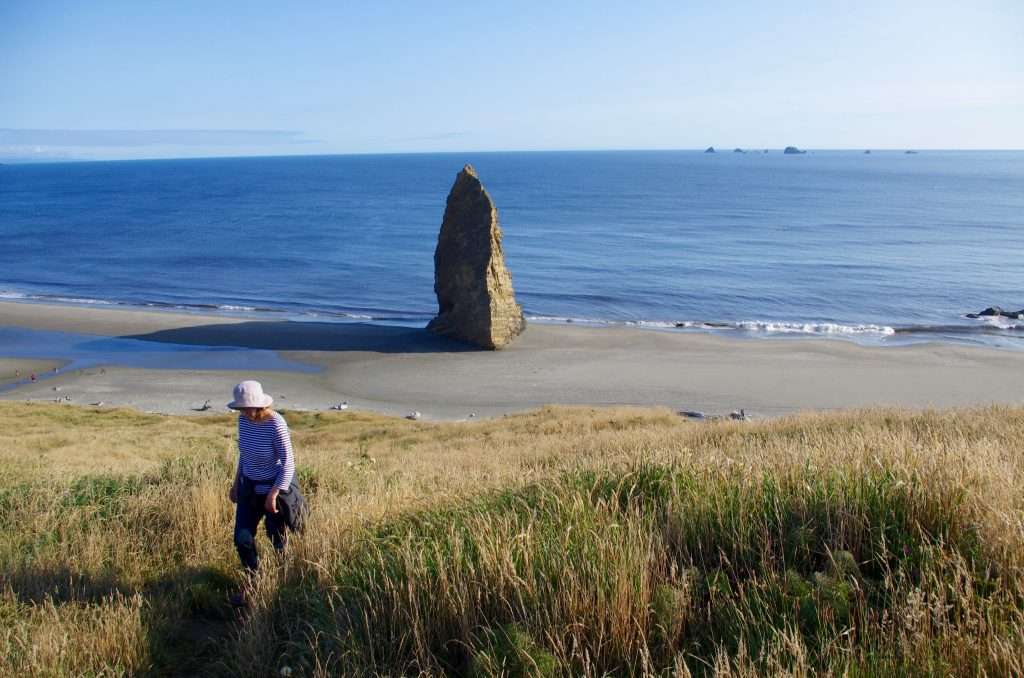 Another Needle Rock, this time on the beach south of Cape Blanco, Oregon’s westernmost point. (Photo by John Sparks)

The stacks are a scenic wonder but are usually visited only by approved scientific researchers. Hosting breeding seals, sea lions, and sea birds, they are part of the Oregon Islands National Wildlife Refuge and the Oregon Islands Wilderness. The islands are closed to public entry all year, and from May 1 to September 15, boats must keep a distance of at least 500 feet.