Hike of the Month: Sutton Creek

Fine weather windows make the Oregon Dunes an ideal area to explore in the early months of the year. Two connected loops at this northern end of the Oregon Dunes National Recreation Area take hikers along meandering Sutton Creek through dense coastal woods. You’ll get views north from Holman Vista to Sea Lion Point and Cape Mountain, admire a gallery of contorted Sitka spruce, and observe the vegetal colonization of once-mobile sand dunes. You can extend this hike by fording Sutton Creek to reach Baker Beach from Holman Vista (the route is closed for snowy plover nesting from mid-March to mid-September) and by taking the Alder Dune Trail to Alder Lake and its nearby campground (see the Sutton Area Trails map). 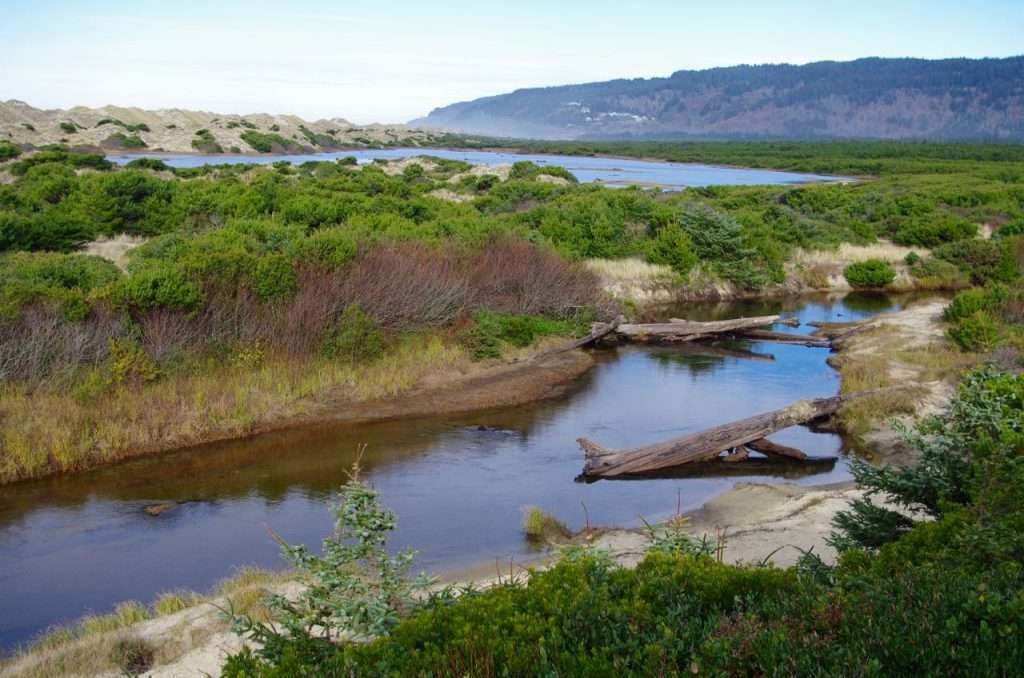 A view looking north across the deflation plain to Sea Lion Point from Holman Vista. (Photo by John Sparks)

Dave Holman was a local newspaper editor and champion of the Oregon Dunes National Recreation Area. The view from the observation platform named in his honor extends over the deflation plain, the flat, vegetated depression between the foredunes above the beach and inland dunes. Coastal winds whip over the foredune buffer and strip away loose material to create a low area that is prone to flooding in the wet season. Deflation plains in the Oregon Dunes contain marshes, lakes, and thickets of water-loving vegetation, such as wax-myrtle, willow, and sedges. Slightly higher hummocks may be colonized by stunted colonies of shore pine and Sitka spruce. 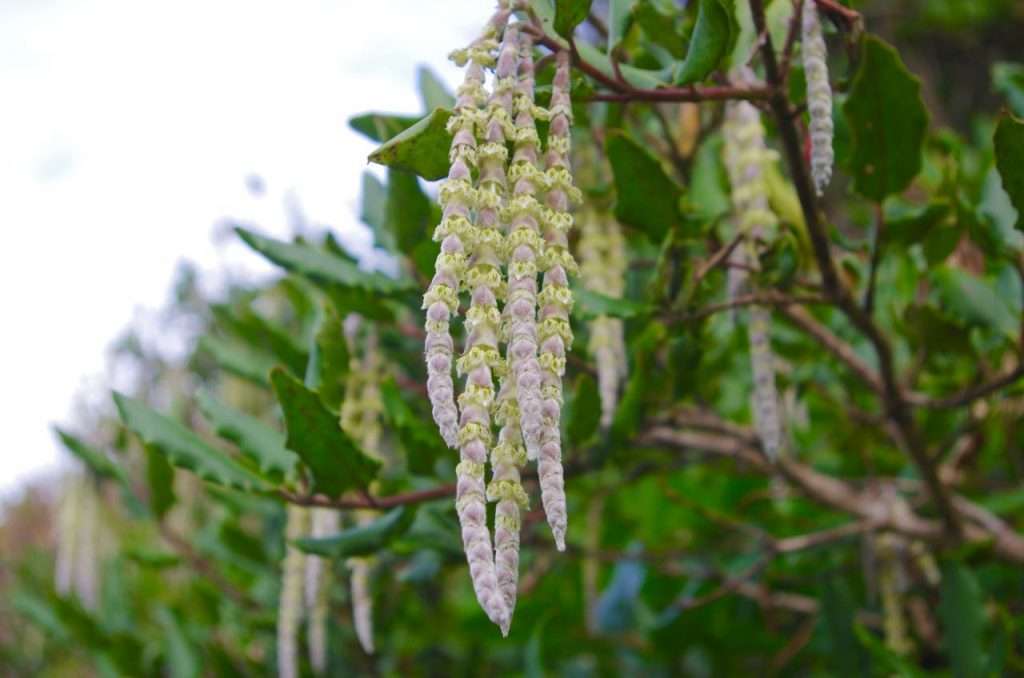 It’s always a treat to find a winter-blooming native plant. Coast or wavyleaf silktassel (Garrya elliptica) is dioecious (having separate male and female plants). It displays its male catkins, up to eight inches long, in the depths of winter; the female bushes are less showy, but these waxy-leaved shrubs, up to 15 feet high, stand out when all else is dormant. Coast silktassel thrives in the mild coastal climate from the central Oregon coast to Santa Barbara in California. The plant has become popular in horticulture, having been brought to England in the 1830s by the well-known botanist David Douglas. 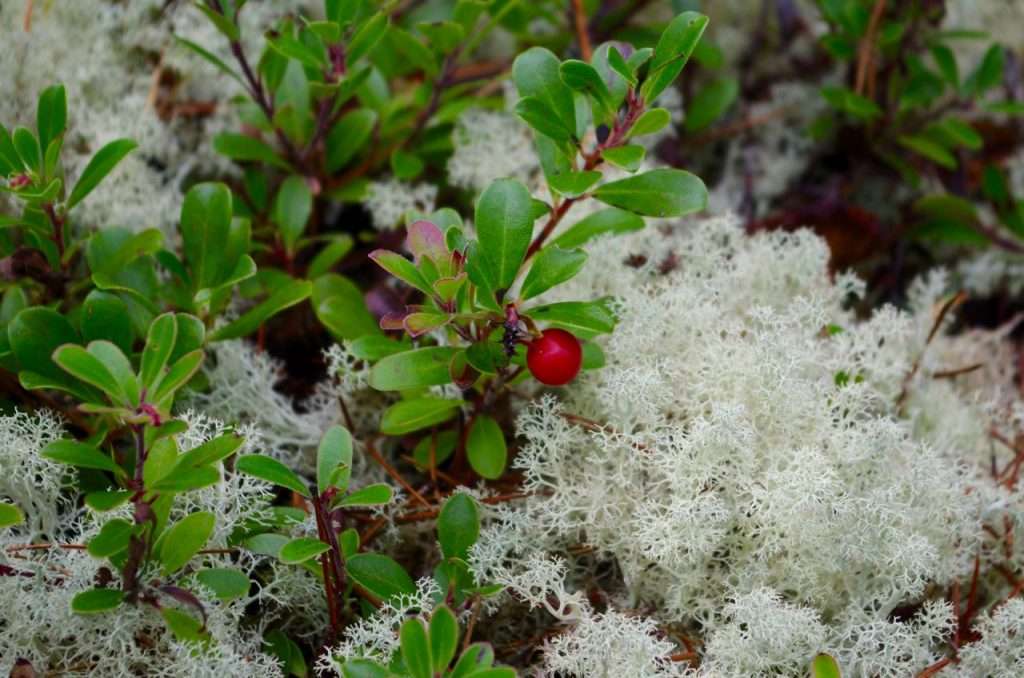 Star-tipped reindeer lichen (Cladonia stellaris) and kinnikinnick (Arctostaphylos uva-ursi) are colonizers of stabilized sandscapes. The reindeer lichen, which grows slowly in small rounded ‘cauliflower’ cushions, forms mats over large areas. These lichens are the most important winter food for reindeer and caribou in Arctic regions, but in our area they are most common on stabilized coastal dunes and expanses of pyroclastic grit, such as Old Maid Flat near Mt. Hood. Kinnikinnick or bearberry is a widely-distributed plant that flourishes from alpine tundra to temperate coasts. The berries will stay on the plant into winter and were an important food source for some peoples, tasting far better after cooking. The name kinnikinnick comes from Unami, an Algonquian language, and was used to describe the smoking mixture or ‘tobacco’ of various Native American tribes, with the dried leaves of this plant being the principal ingredient. 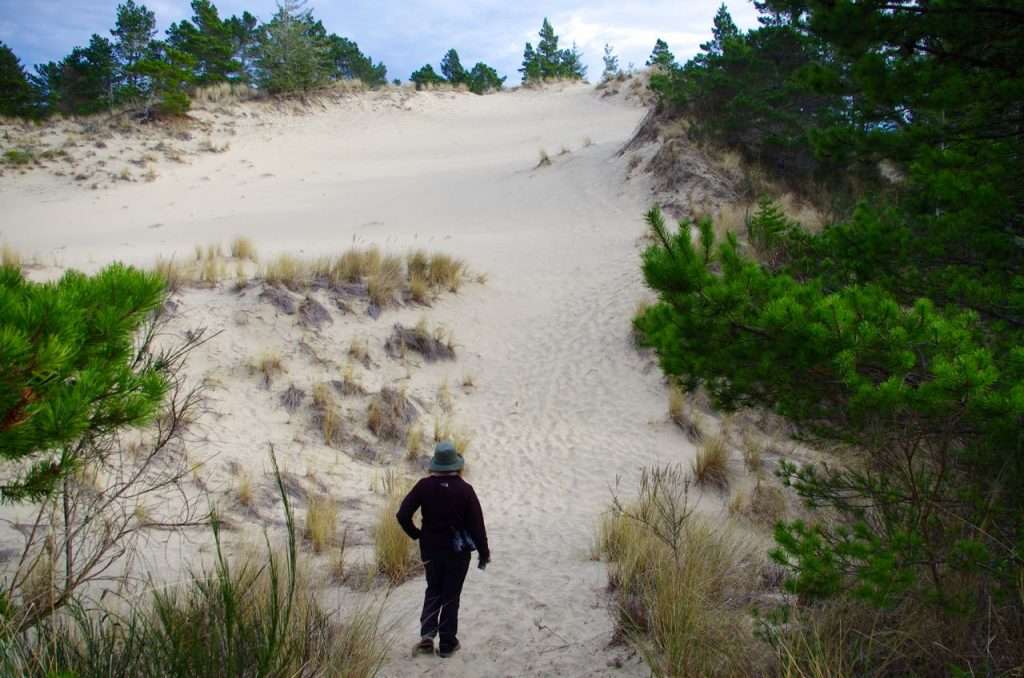 Coastal dunes are formed by wind moving sand grain by grain from the beach farther inland, a process known as aeolian transport. In the Oregon Dunes, the low barrier of foredunes at the back of the beach causes the wind to rise and then drop to scoop out the depression of the deflation plain, giving rise to the more substantial inland dunescape, sometimes 250 feet high, that before the 19th century conducted a slow, natural march inland damming creeks and swallowing up coastal forests. The aeolian action confounded Euro-American settlers, silting up their harbors, obliterating wagon roads, and burying buildings. One answer was the importation of invasive beachgrasses, Ammophila arenaria from Europe and Ammophila breviligulata from the eastern U.S., to stabilize the foredunes. This effort indeed retarded the movement of sand, but it indelibly altered the dunescapes, which are no longer the mobile hills and vales of sand they once were. One species in particular, the western snowy plover, has suffered from the “grassing over” of its open sand nesting habitat. Currently, efforts are underway all along the Pacific Coast to clear dune areas of beachgrass and restore aeolian movement at sites away from human settlement.