One of Oregon’s largest natural lakes, Waldo Lake is also considered one of the purest lakes in the world, with water so clear that it’s possible to see over a hundred feet into its depths. The Waldo Lake Trail, officially known as the Jim Weaver Loop Trail #3590, circles the lake and is open to mountain bikers. On the south, west, and north shores of the lake, the trail forms the boundary of the Waldo Lake Wilderness, though Waldo Lake itself and its shoreline are not part of the wilderness. This short hike under old-growth mountain hemlocks to a three-sided shelter in a wet meadow gives you a sampling of what the lake has to offer. August is a good month to come here: Earlier in the summer, mosquitoes abound! 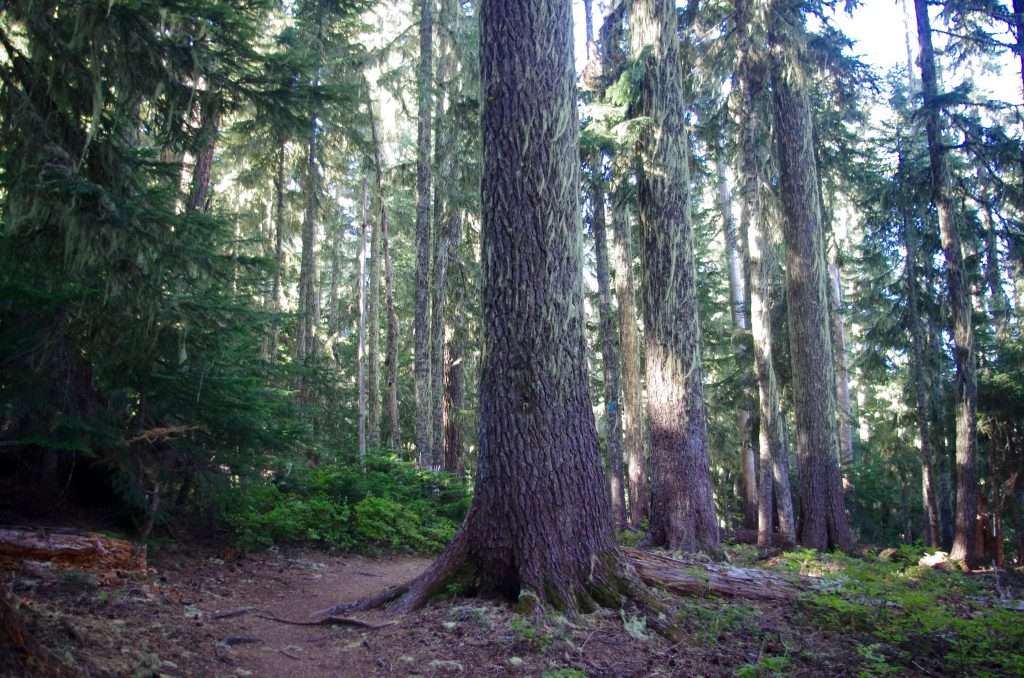 Mountain hemlock (Tsuga mertensiana) dominates on Waldo Lake’s shoreline. In Oregon, this is a subalpine conifer which tolerates deep snow. However, with the snow acting as an insulator, the tree can actually continue to grow with its “feet” buried. In Alaska, mountain hemlocks can flourish at sea level. The tree was first described by Karl Heinrich Mertens, a German botanist who sailed with Russian captain Lieutenant Fedor Petrovich Litke, himself originally German, in one of the great scientific expeditions of the nineteenth century, exploring the coasts of Russian Asia and Alaska from 1826-1829. 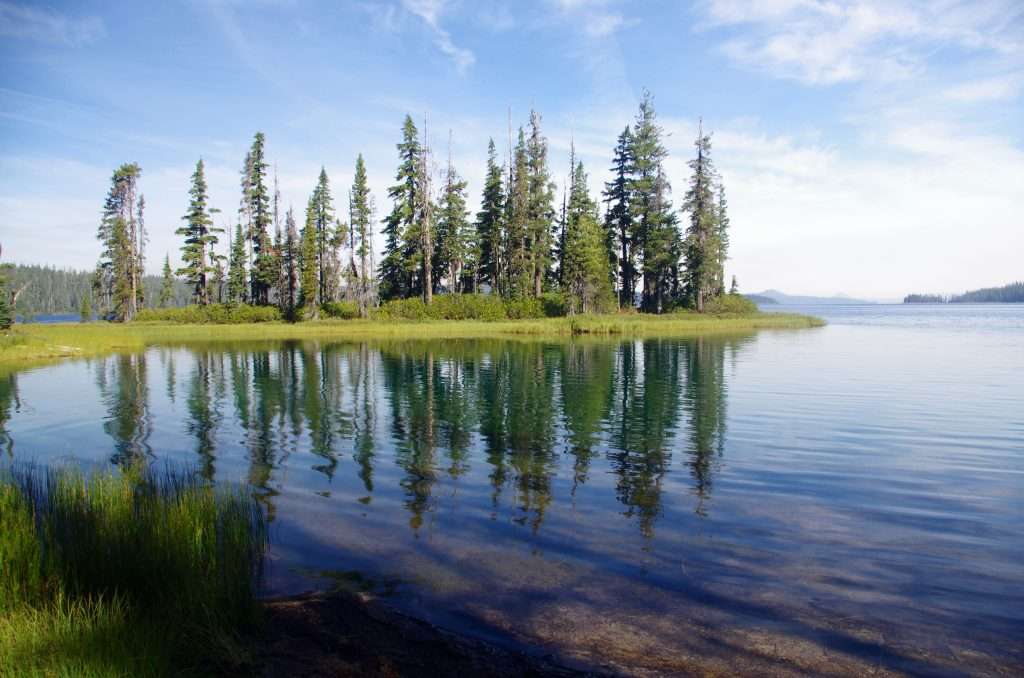 Wooded island off the south shore of Waldo Lake. (Photo by John Sparks)

Waldo Lake’s location accounts for its purity. Almost on the crest of the Cascades, it has only a few short streams entering it, bearing little sediment or nutrients to encourage plant growth. At 9.8 square miles, it is the second-largest natural freshwater lake in Oregon, after Crater Lake. It is also, after Crater Lake, the second deepest in the state, at 420 feet. Waldo Lake finally became a nonmotorized lake in 2012, thus ensuring its water quality. In 1914, a head gate and tunnel were constructed on the west shore of the lake to divert water to the Willamette Valley for irrigation. The lake’s level dropped by 25 feet, but the operation was not financially successful. The leaking head gate, which is still there in Klovdahl Bay, was eventually sealed in 1960, and the lake has returned to its natural level.

The lake is named after John Breckenridge Waldo (1844-1907), the first justice on Oregon’s Supreme Court who had been born in the state. Waldo had a passion for exploring Oregon’s wild places, and he wrote extensively about his travels in the Cascades. His writing took on a conservationist tone when he lamented the destruction of Cascade forests by loggers, homesteaders, and sheep herders. He advocated for the creation of a wilderness reserve stretching from Mount Hood to Crater Lake. 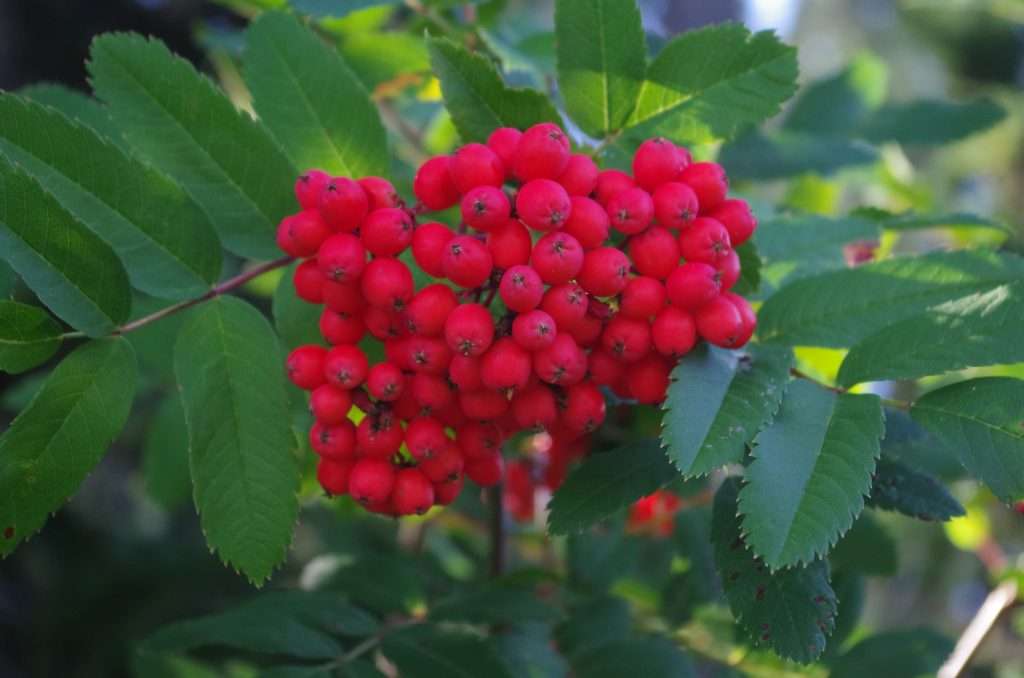 Sitka mountain ash (Sorbus sitchensis) is a common shrub at subalpine to alpine elevations in the Cascades and northern Rocky Mountains. It is most noticeable in the fall, when the leaves turn reddish and the bright berries stand out. These very tart fruits stay on the plant into the winter months and are avidly consumed by various birds, including robins and waxwings. In Europe, the closely related rowan tree (Sorbus aucuparia) was closely associated with magical practices, and was the source of wands, divining rods, and druids’ staffs. 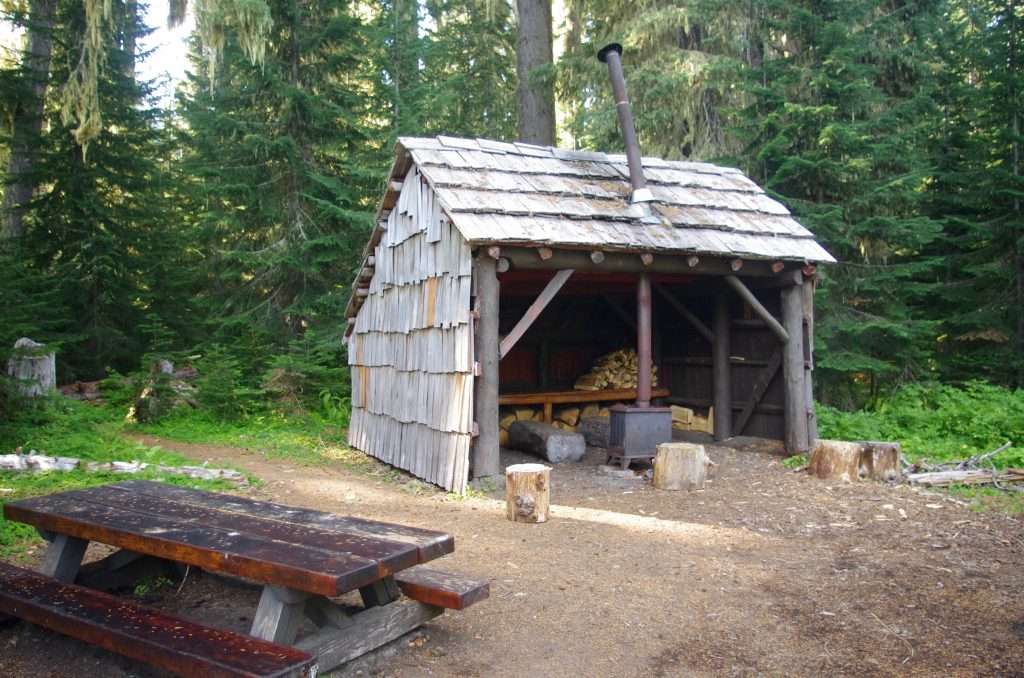 The South Waldo Shelter sits in an area of wet meadows near the south shore of Waldo Lake close to the junction of the South Waldo and Waldo Lake trails. The three-sided shelter sports a shake roof, wood stove, picnic table, and sleeping platform. The structure is maintained by the Lewis & Clark College “College Outdoors” program.