Hike of the Month: Paulina Peak

Paulina Peak, the highest point on the Newberry Volcano caldera rim, towers over the remains of one of the most massive shield volcanoes in North America. The original mountain here topped out at over 14,000 feet. Newberry’s lava field covers 1,200 square miles, with the city of Bend situated on top of it. The volcano erupted at least 12 times between 10,000 and 5,700 BCE and will almost certainly erupt again. This hike begins on the shores on Paulina Lake and rises through different conifer types to the summit area, to which you can also drive in spring and fall. The views here on a clear day, some of the most extensive in Oregon, take in the Cascade Range from Mount Adams in Washington to Mount Shasta in California.

Note that you can reduce the round-trip length of this hike by two miles if you park on the summit road at the Paulina Peak Trailhead. Cars are not allowed to drive all the way up to the Paulina Peak summit in summer. 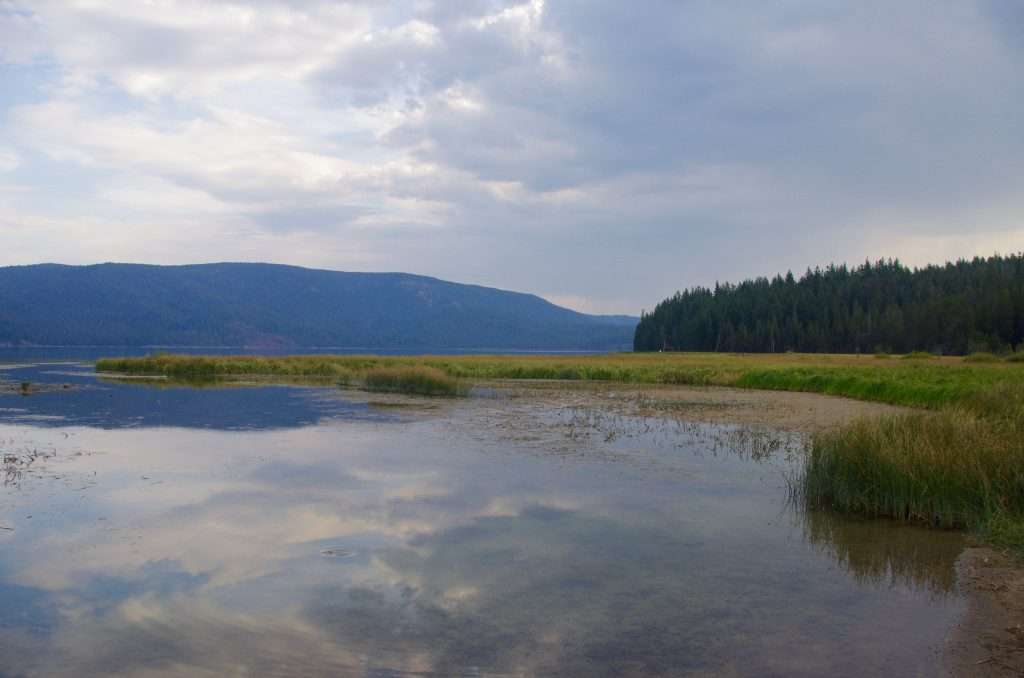 View from the shore of Paulina Lake. (Photo by John Sparks)

Paulina Lake is the larger of the two lakes within the Newberry Caldera. The other lake, East Lake, is 50 feet higher than Paulina Lake and provides the latter some of its inflow. The two lakes used to be parts of the same large crater lake, but small cinder cones have erupted to create a ridge between the two. There are campgrounds, picnic areas, and hot springs on the shore of the lake, which has a surface area of 1,530 acres and a maximum depth of 250 feet. Paulina Lake has the largest brown trout in Oregon, with the state record being set here many times. There is also a notable population of kokanee salmon.

The lake and nearby Paulina Peak are named after Chief Paulina of the Northern Paiute, who refused to move to newly established reservations and led raids against white settlers for about eight years in the 1850s and 1860s. 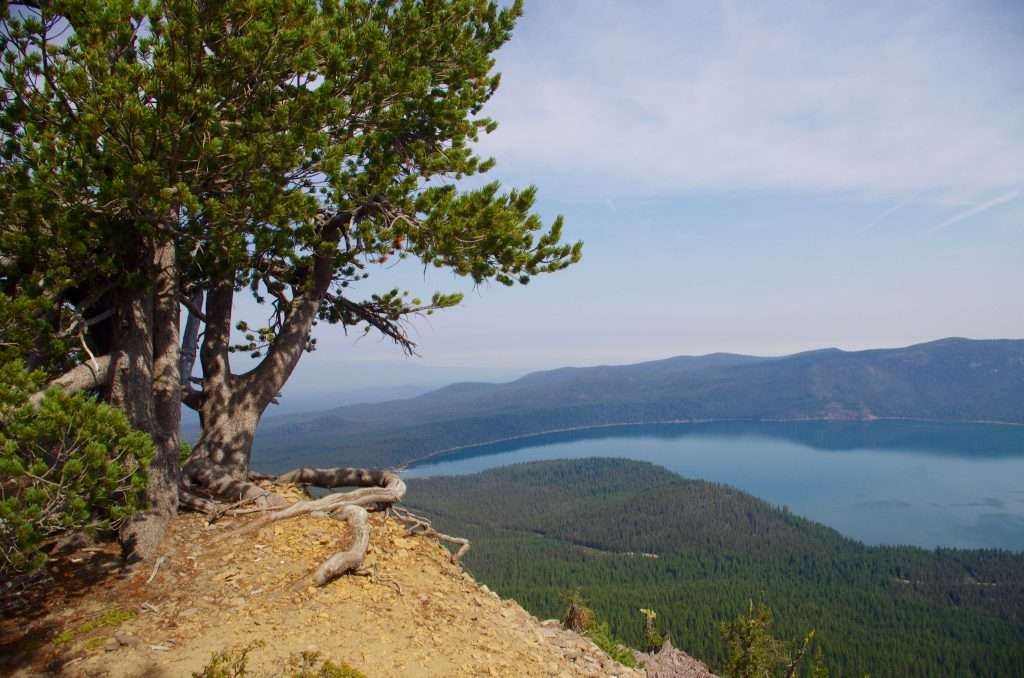 A whitebark pine perches on the rim of the Newberry Caldera. (Photo by John Sparks)

The whitebark pines (Pinus albicaulis) on Paulina Peak, as elsewhere in the Pacific Northwest, were attacked by white pine blister rust in the 1950s, leaving a forest of stark skeletons on alpine ridges. A small percentage of the trees are resistant to the fungus, and a project has been underway to collect seeds and propagate the disease-resistant trees. A short nature trail near the summit of Paulina Peak describes this effort and the ecology of the whitebark pine. In the 2000s, infestations of mountain pine beetles have added to the trees’ woes, and some spraying is done to deter the insects. Whitebark pines are often seen growing in clumps where they germinate from seed caches stored by Clark’s nutcrackers. They are the highest elevation conifer in our area, but in Newberry Crater they may also be observed making purchase lower down in the stark landscape of the Big Obsidian Flow. 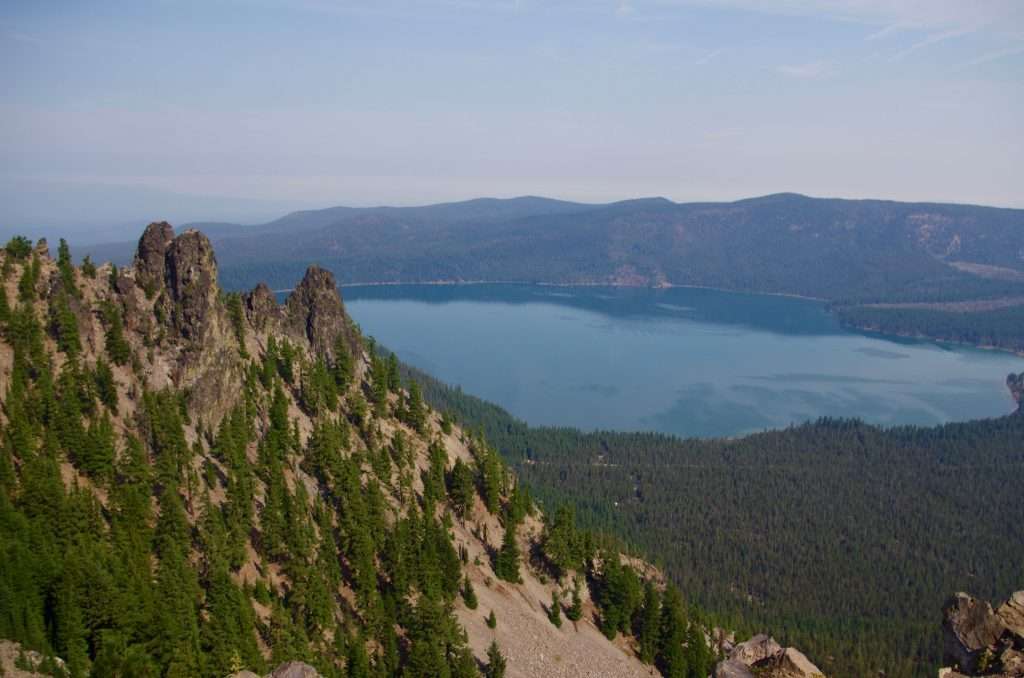 The Newberry Volcano first erupted about 600,000 years ago and is still considered an active volcano. The current caldera, about four miles wide and five miles long, formed about 75,000 years ago. The highest point, Paulina Peak, is at 7,989 feet. The two lakes, Paulina and East lakes, take up much of the caldera’s floor. An eruption about 7,000 years ago formed a pumice cone in the center of the caldera.

The volcano is named after John Strong Newberry, an Ohio physician. Newberry served as geologist and naturalist on three expeditions to the West between 1855 and 1860. He was the first geologist to study the Grand Canyon. 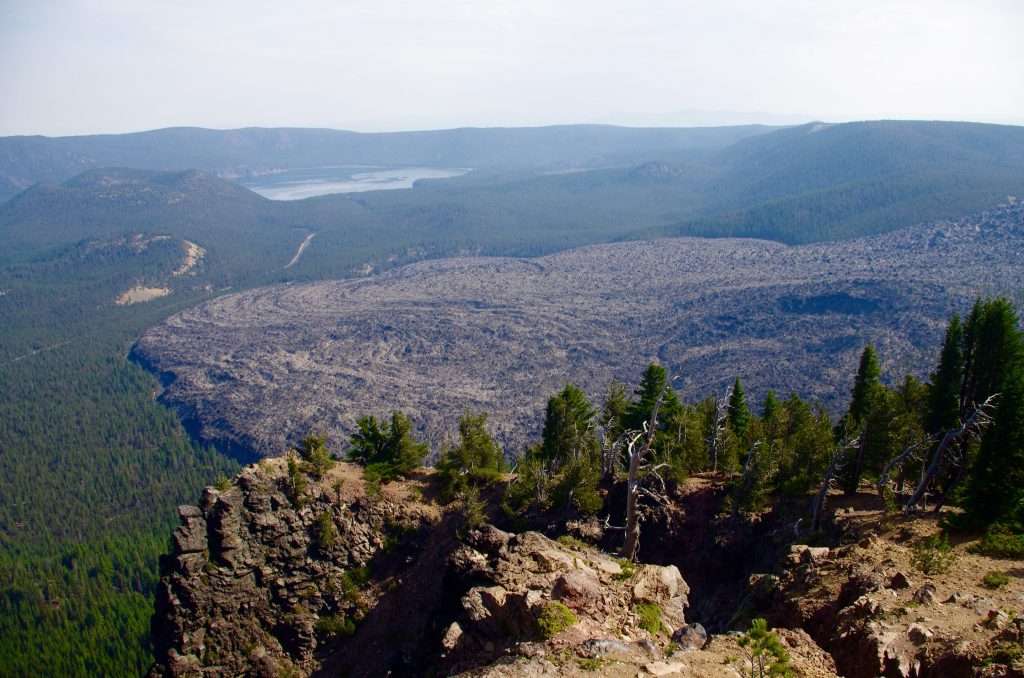 The one-square-mile Big Obsidian Flow is visible from Paulina Peak. This lava flow, composed almost entirely of black glass (obsidian), is the youngest in Oregon, and issued forth only 1,300 years ago. Obsidian forms from rapidly cooling felsic (feldspar and quartz) lava without any crystal growth. Essentially, it is a natural glass which leaves sharp edges when fractured. American Indians fashioned obsidian fragments into tools and weapons, such as spear and arrowheads. Note that collecting obsidian is forbidden within the Newberry National Volcanic Monument.