This lower-level loop using the Pacific Crest and Timberline trails can be done early in the season before alpine trails on Mount Hood have melted out. The route takes in some of the more interesting features of Mount Hood’s west side, including Ramona Falls as well as a short side trip to the stunning view from the top of Bald Mountain. In recent years, the volatile main channel of the Sandy River and its Muddy Fork have destroyed permanent bridges, so crossing those streams can be an adventure and ideally should be attempted only after a period of dry weather. Also note that this section of the Timberline Trail has several slide areas that could be tricky to cross. The steep meadows and lush springs of the Bald Mountain and Yocum ridges make this a prime wildflower hike in July.

Note that the mileage given is from the Ramona Falls Trailhead. A shorter version of the loop, with a somewhat longer drive, can begin at the Top Spur Trailhead. 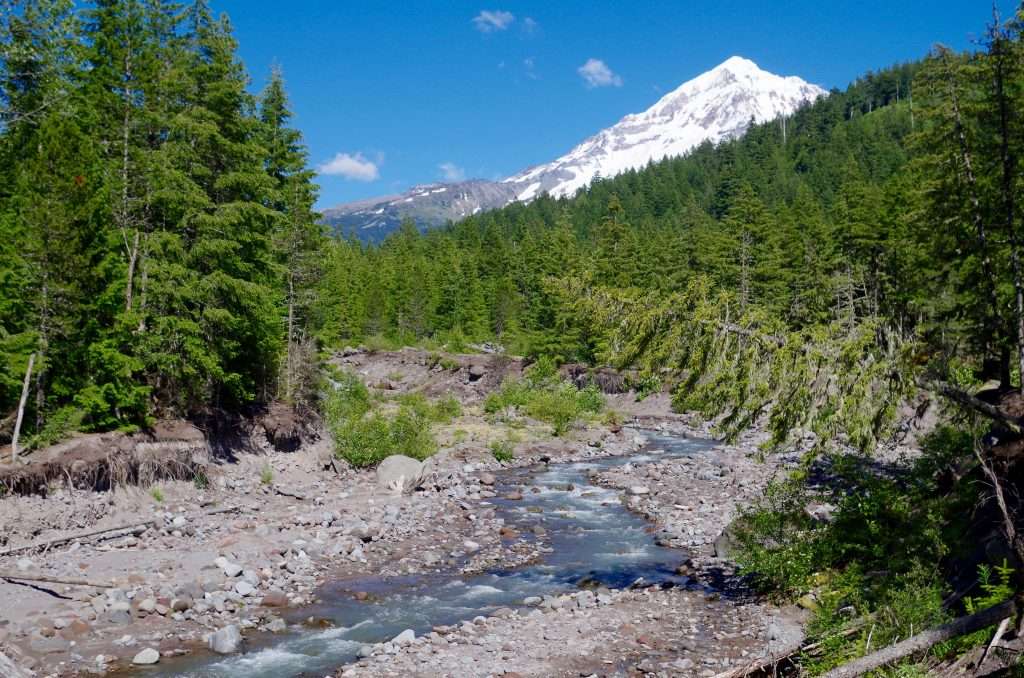 Beginning in about 1780, pyroclastic flows from Mount Hood’s Old Maid eruptions buried the Sandy River, which continues to change its course as it carves through the soft strata. There have been a series of “permanent” as well as temporary footbridges over the years, each one destroyed by the river on one of its flash flood rampages. The US Forest Service has now declared that it will make the effort no more, and hikers into this area, part of the Mount Hood Wilderness since 2009, will have to pick their own way. Because the river undermines its banks on a regular basis, there are usually toppled trees that offer an assist if you are game for a balancing act. Bear in mind that there have been some fatalities at the Sandy River crossing on the Sandy River Trail, the last in 2014, when a hiker was swept off the last footbridge and drowned. Do not cross if the water looks dangerously high: glacial silt will conceal the actual bottom and also the rolling rocks that are pushed downstream may cause you to stumble into the spate. 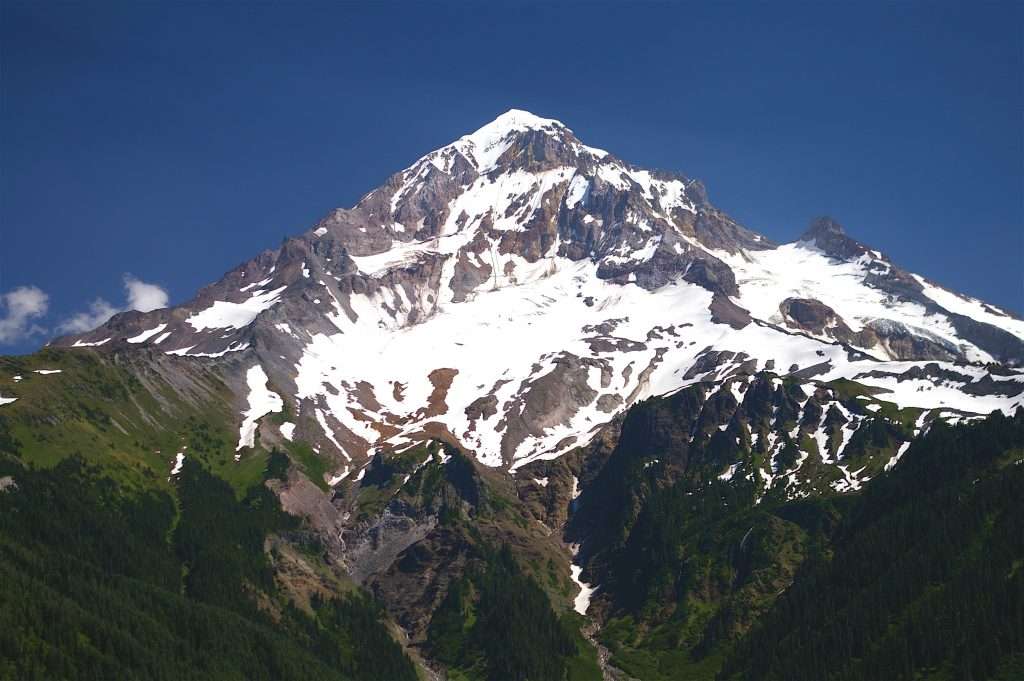 Mount Hood from the top of Bald Mountain. (Photo by John Sparks)

A 0.3-mile user trail leads to the summit of Bald Mountain. After passing the foundation stones of the old Bald Mountain lookout, make your way through a thicket to reach a stunning viewpoint of Mount Hood, with the Sandy Glacier and the valley of the Muddy Fork framed by the Bald Mountain and Yocum ridges. A steep meadow blooming with penstemon, buckwheat, wallflower, paintbrush, and lupine tumbles below you to where the Timberline Trail snakes along the side of the ridge. Mount Adams is also visible from a spot near the old lookout foundation. 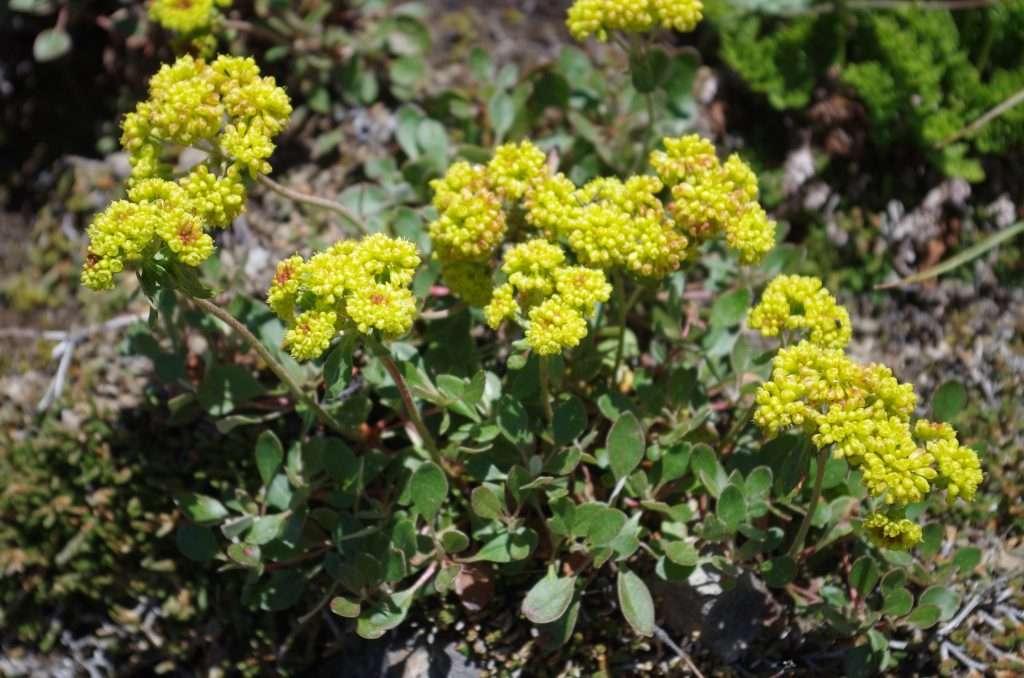 Sulfur buckwheat on the Timberline Trail. (Photo by John Sparks)

Sulfur buckwheat (Eriogonum umbellatum) is a common summer-blooming wildflower on gravelly pyroclastic slopes and can be found high up on Cascade peaks. There are numerous subspecies and varieties—Oregon itself has at least 20—making quick identification sometimes a chore. The plant attracts numerous pollinators, including flower flies, wasps, several species of butterfly, bees, and beetles. 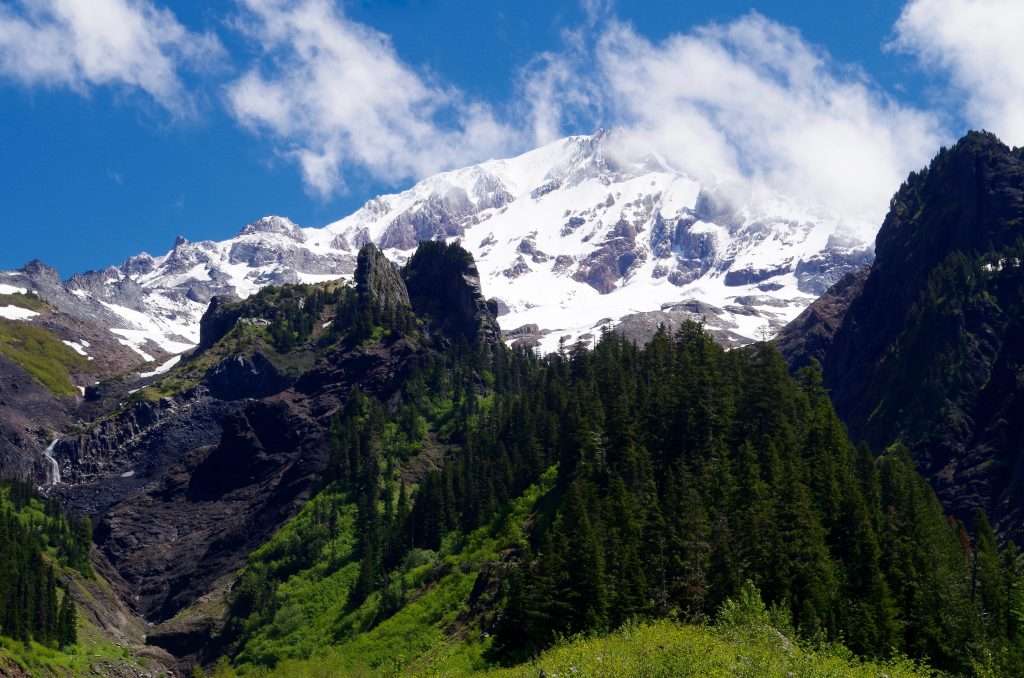 Dark crags at the head of the Muddy Fork valley. (Photo by John Sparks)

Down at the upper crossing of the Muddy Fork, which will have two if not three channels running in July, views extend up past a rampart of dark crags to the Sandy Glacier, with the Bald Mountain-McNeil Point Ridge to the left and Yocum Ridge on the right. Massive debris piles accumulated on the north side of the Muddy Fork during torrential storms in 2002. Pouring down the steep slopes of Yocum Ridge are three seasonal falls between 500 and 750 feet in height. 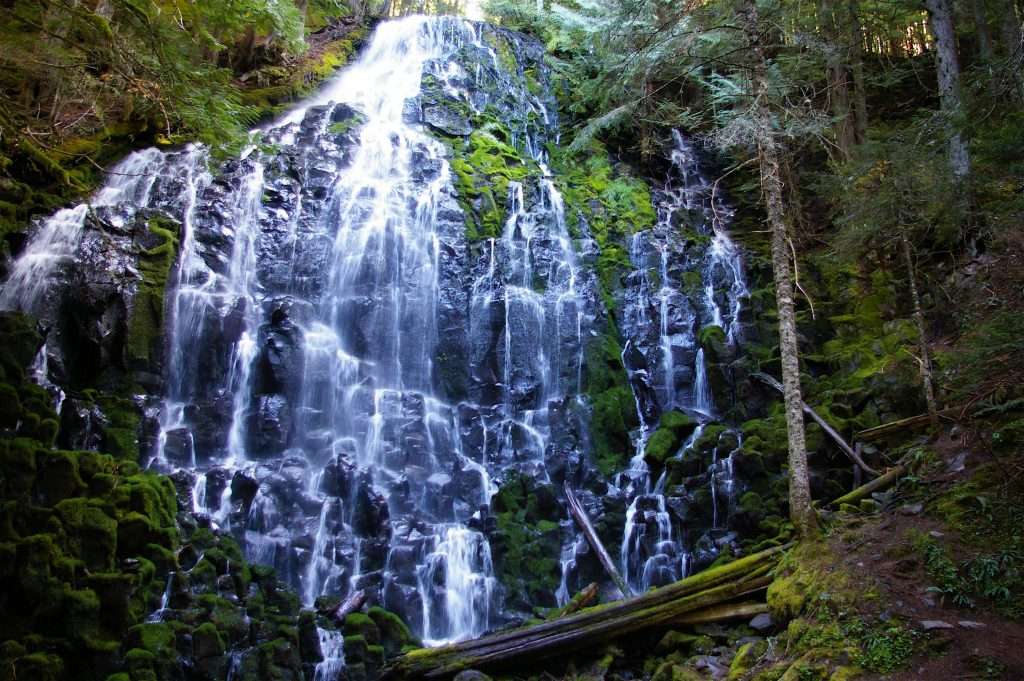 According to McArthur and McArthur’s Oregon Geographic Names, Ramona Falls was discovered and named by John E. Mills, a Forest Service employee who oversaw Civilian Conservation Corps crews constructing the Skyline Trail, later the Pacific Crest Trail, in the area. Mills found the waterfall in August 1933, while he was scouting ahead to fix the trail’s course. He was engaged to be married and was enamored of the well-known love song “Ramona.” The song and several silent and early talky movies were derived from the extremely popular romantic novel Ramona by Helen Hunt Jackson, a dedicated activist for Native American rights. The main character in the 1884 novel is Ramona, a half-Indian woman who struggled against the racism of the time in colonial Spanish California.