The short Herman Creek Pinnacles Hike takes you to a scattering of large chunks of basalt that slid off the south side of the Gorge in an ancient landslide. Other eroded remnants and prominences lie in the forest nearby. You can scramble up to a viewpoint to get a vista across the Columbia River towards Stevenson. Near the pinnacles a waterfall plunges down through a deep cleft, and you’ll cross Herman Creek. The route of the hike was affected by the 2017 Eagle Creek Fire, but not severely so, and most of the forest canopy is intact. For a longer hike to the Herman Creek Pinnacles which begins at the Bridge of the Gods Trailhead, see the Herman Creek Pinnacles via the PCT Hike. 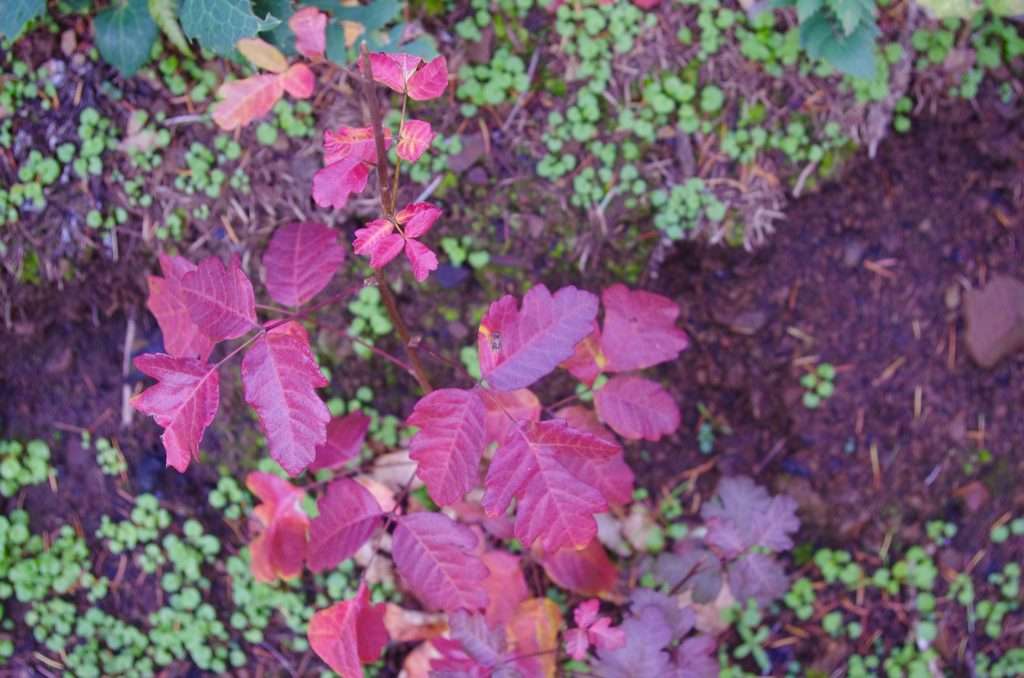 Poison oak (Toxicodendron diversilobum) grows along the verge of the Herman Creek Trail although it may be inconspicuous among the other ground vegetation. In fall, it may turn yellow or reddish–the latter often in areas where it is exposed to the sun. The plant can be a shrub or a vine that climbs 40 feet up a tree trunk. Poison oak belongs to the cashew family, Anacardiaceae, and relatives include poison ivy, poison sumac, mango, cashew, and pistachio. Many of these plants contain urushiol, an oil which gives you a rash upon contact. Susceptibility to the oil varies considerably among individuals. The oil can be removed within 10 minutes of contact with soap and water. According to the US Forest Service, poison oak is the leading cause of field injuries among Forest Service workers. 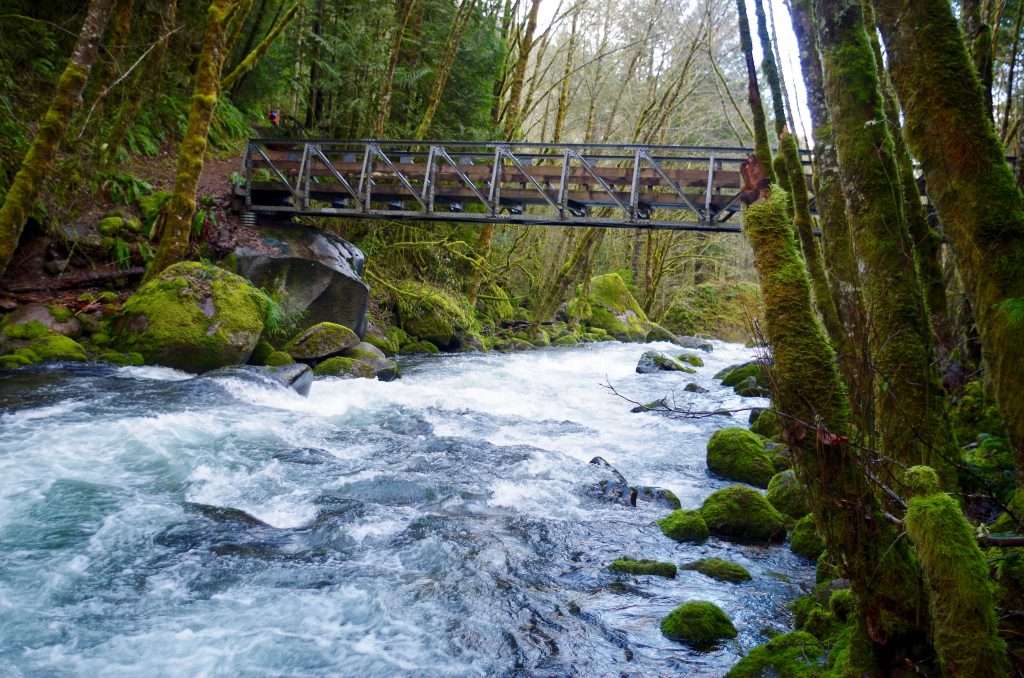 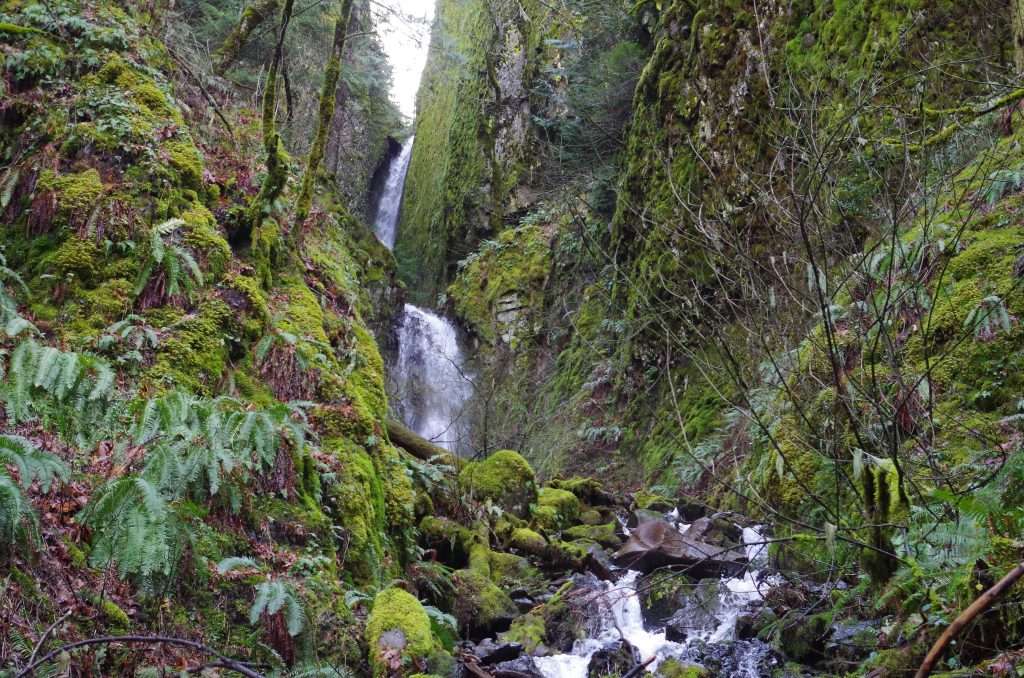 Just east of the Herman Creek Pinnacles is Pacific Crest Falls, an unofficial name given because of the waterfall’s proximity to the Pacific Crest Trail. The unnamed stream here does not have much flow in the summer, but the falls come to life after the start of the rainy season. There are two tiers, with the upper tier joining flow from two narrow defiles. The united stream then splashes over the lower tier closer to the trail. 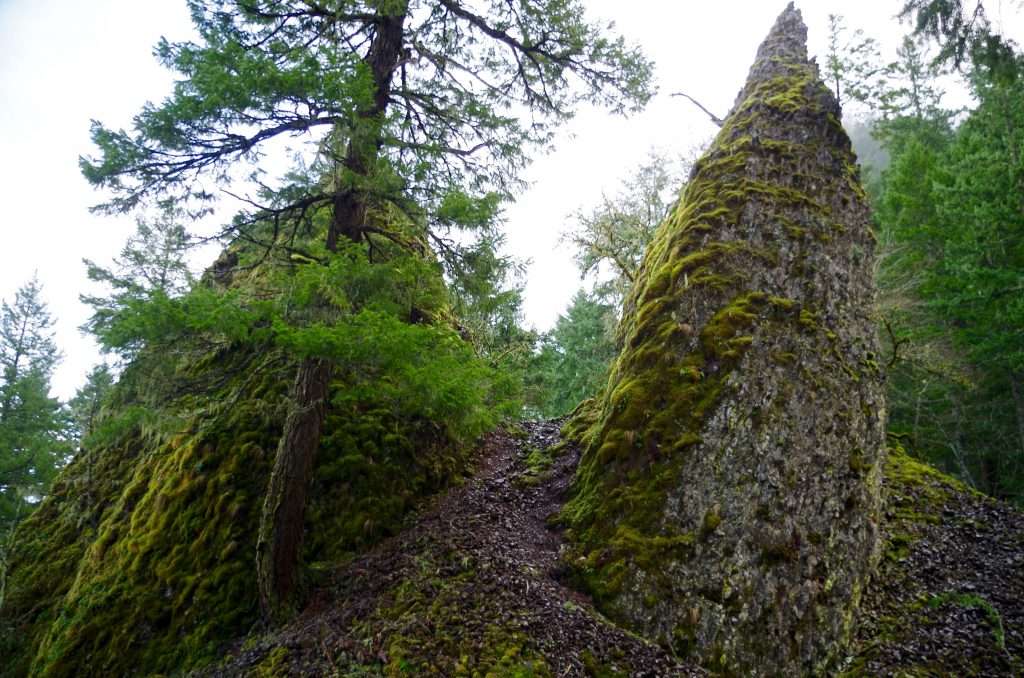 A number of basalt pillars jut through the forest canopy below the steep northern face of the Benson Plateau. The plateau itself was sheared off by the Missoula Floods between 13,000 and 15,000 years ago. Unstable slopes have continued to crumble, as evidenced by vast skirts of scree. The pinnacles are likely the result of major landslides where entire sections of the cliff face peeled off and slid down the slope. An increased frequency in landslides is quite possible in the aftermath of the Eagle Creek Fire where vegetation that offered some cover was burned off.