Herb Robert: Epic Cure-All or Villain of the Piece?

Herb Robert (Geranium robertianum) is the villain of many aliases along the scorched slopes of the Columbia Gorge now exposed to a population explosion of invasive species. This small, innocuous-looking plant with pretty pink flowers is one of several Eurasian geraniums that have established themselves in our area in the last three decades.

An animal or human brushing against a mature seed capsule may cause its seeds to shoot over 15 feet, and it carpets both shady forest floors and scree slopes when there are no taller plants. The seeds are also sticky, enabling another method of distribution—attachment to a moving object such as a hiker’s sock, bird’s feather, rabbit’s fur, or car tire. This little geranium will become the first plant to establish itself after ivy has been pulled from an area. Herb Robert is now the major target of weed-pulling crews in the aftermath of the Eagle Creek Fire. 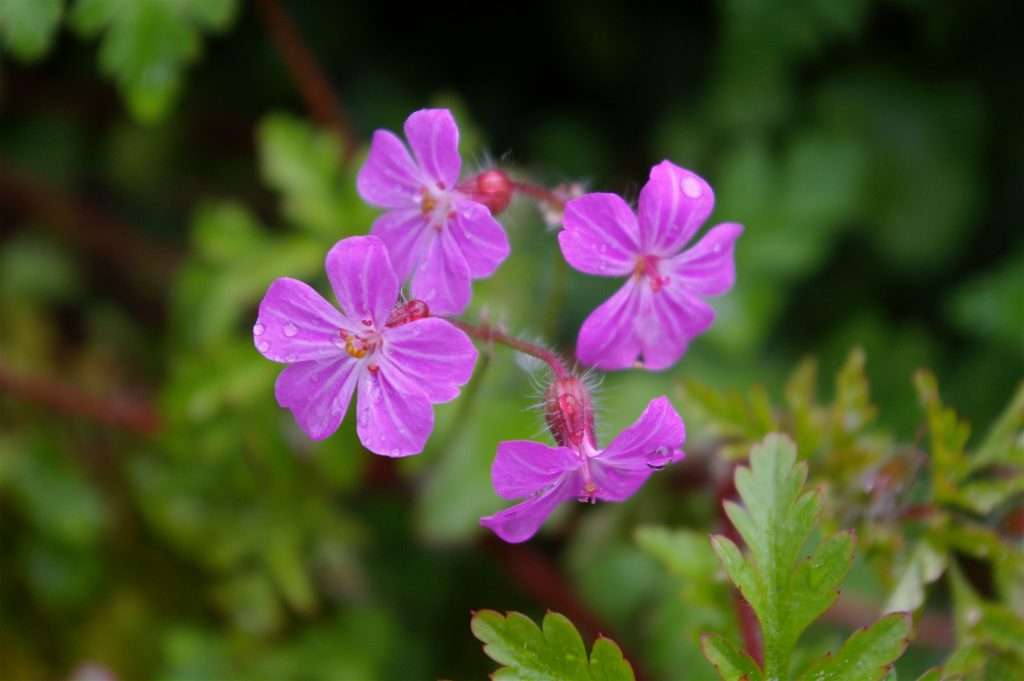 Despite its poor reputation in the Pacific Northwest, herb Robert has historically been valued as a “miracle” plant where it is native, although it is also connected to the practice of witchcraft. The plant is edible, and the leaves can be eaten fresh or steeped as a tea. Perhaps because of its odor, a ring of herb Robert around your garden will keep away deer and rabbits, and it has been used as an insecticide. You can rub the leaves on exposed skin to keep mosquitoes off. It is an antioxidant and it supports the immune system. It has been shown to lower blood sugar levels and has been used to treat diabetes. Traditional herbalists in Europe used it to treat ailments as varied as toothache, cancer, conjunctivitis, jaundice, nosebleed, gout, and dysentery. It was also applied to wounds and bruises. Like other geraniums, herb Robert contains geraniin, which alleviates diarrhea. Animal herbalists have employed herb Robert to treat foot-and-mouth disease in cattle.

In the modern age, one place where herb Robert flourishes is under power lines. Supposedly, it has the property to absorb radiation from the soil in a powerline corridor and break it down. In Europe, herb Robert is able to grow along railway lines and break down what nutrients it can retrieve from ground polluted by heavy metals.

And now to some of the aliases of this famous weed. One source gives about 160 common names for the plant. Here are just a handful:

Herb Robert: Said to honor Saint Robert of Molesme, an 11th-century herbalist, abbot, and founder of the Cistercian order. Another theory has it named after Robin Goodfellow, pseudonym for the mischievous fairy or forest sprite Puck. “Robert Goodfellow” was also an alias used by the legendary bandit Robin Hood. Other theories associate the plant with St. Rupert of Salzburg (8th century) or St. Robert of Turlande, an 11th-century Benedictine priest who devoted his life to serving the poor.

Red Robin: “Robin” is the diminutive of “Robert”; the stems and leaves turn red as the plant ages.

Storksbill: Under the medieval “doctrine of signatures,” parts of plants resembling parts of the body were a sign from God that the plant could be used to treat those same parts. The doctrine also applied to ‘shape’ associations. In this case, the seedpod of herb Robert looks like a stork’s bill, so the plant was used to treat bleeding after childbirth. It is also called “crane’s bill.” “Geranion,” Greek for “crane,” gave the plant its name.

Stinking Bob: The plant is variously described as smelling like diesel fuel, “burnt tires,” or just a “general chemical smell.”

Kiss-me-love-at-the garden-gate: A name given to various plants that multiply promiscuously. One thing leads to another. . . .

Jack Horner: From the popular English nursery rhyme “Little Jack Horner.” In the 18th century, the term “Jack Horner” was applied to any political opportunist.

Death-come-quickly: If the plant is picked and taken into the home, a death will soon follow. If found in the house, it is definitely a curse from the evil fairy Puck (Robin Goodfellow).

Crow’s foot: A crow’s foot was a symbol of approaching death; the plant is also sometimes called “witch’s foot.”

Bloodwort: Also under the doctrine of signatures, because the plant turns red, it was believed to have the property of regenerating blood. It was used to stop bleeding and to treat the kidneys.

Dragon’s blood: Because of its extraordinary medicinal properties, herb Robert has been associated with plants that produce what’s called “dragon’s blood,” a red resin that is used as a curative, dye, and varnish.

Dolly’s nightcap: “Dolly” was often used in southwest England to describe something small and pretty. The plant was also called “Dolly’s shoes,” “Dolly’s pinafore,” and “Dolly’s apron,” but the allusion to all these various items of clothing is unclear.

Felonwort: A “felon” is a bacterial infection in the finger, another application for this magical herb.

Fox geranium: In this case, “fox” is a corruption of “folks,” as in “fairy folk.” Calling a fairy by his or her name is considered unwise since fairies are paranoid creatures and always think you are talking ill of them. The fairy here is Puck, but we need to call him by another name, Robin Goodfellow, in order not to evoke his ire and retaliation.