Work in the Columbia River Gorge has changed dramatically for Trailkeepers of Oregon since September 2, 2017. On Labor Day weekend we saw the Eagle Creek Fire race across some of the most highly prized scenic sites and hiking terrain in Oregon. Over the following weeks the fire grew to encompass nearly 49,000 acres, leaving a mosaic pattern of different severities of burned landscape and closing 121 miles of trails. 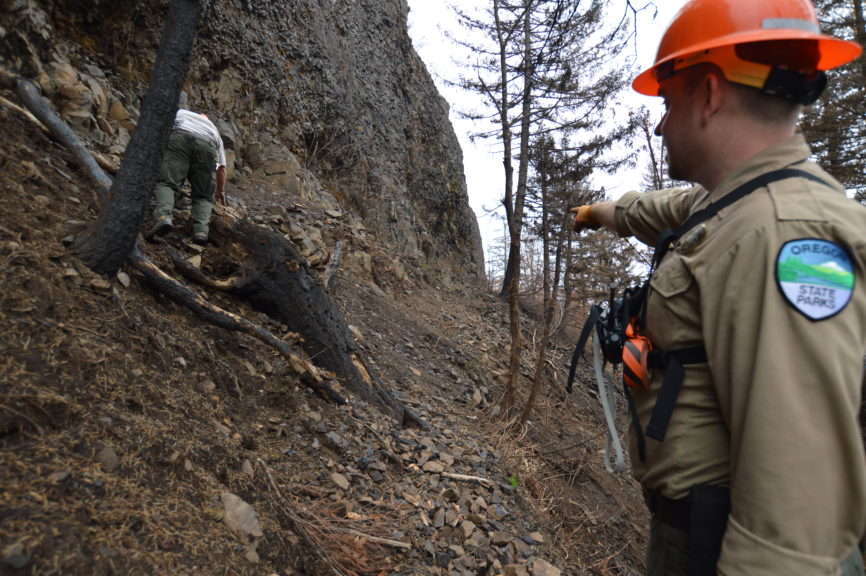 Oregon State Park Ranger Jamen Lee points to where the trail grade for the Upper McCord Trail has been overcome by debris and landslides from the Eagle Creek Fire during initial post-fire trails assessments in October 2017. Photo by Andrea Berkeley.

In mid-September TKO formed the Gorge Trails Recovery Team with nonprofit partners who have had a lasting relationship with Gorge land managers and trails. TKO and Friends of the Columbia River Gorge, Pacific Crest Trails Association (PCTA), and Washington Trails Association (WTA) have amassed a still-growing list of volunteer sign-ups that has topped 4,000 willing participants. Our group has been working together to offer events to develop skills and maintain support for when the time comes to help bring back our Gorge trails.

We’re continuing to meet frequently with land managers to plan our next steps in assessing, monitoring, and stabilizing trails affected by the fire. Many trails will continue to incur damage during the winter. We plan to schedule work parties in late winter and early spring of 2018. 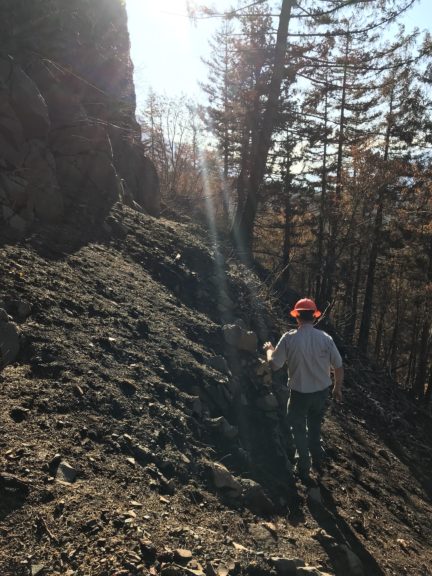 We’ve also agreed with Oregon State Parks to do regular sweep-and-scout hikes along newly opened trails at Latourell and Bridal Veil falls, which will be getting higher than usual winter use. We will be looking to recruit and train volunteers in assessment activities for these and other trails that open in the fire-affected area. Meanwhile other trail systems that are open in and around Portland, Mount Hood, and the Gorge are seeing major increases in use and will need attention and care. We hope to get some of the passion for fire recovery channeled toward these other trail systems as well.

A view of Benson Plateau from State Route 14 on the Washington side of the Columbia during the fire. Photo courtesy of US Forest Service.

Over the coming months, look for announcements of workshops to train volunteers in special skills, and an apprenticeship program to train new volunteer crew leaders. Stay tuned as well for a new Gorge Trails Recovery Team Facebook page that will function as a clearinghouse for upcoming events of the partnering nonprofits.

The Eagle Creek Fire has caused heartache to Gorge visitors as well as economic trauma to the communities around the fire-affected area. The collaboration of land managers and nonprofit partners over the last few months speaks to the importance of our outdoor experiences and suggests what a special place the Columbia River Gorge is to people in Oregon and beyond.

We are engaged in a movement to encourage people to be not just recreational users but also stewards of our outdoor places. TKO will be a dynamic partner in the important work of bringing our Gorge trails back and making them better than they’ve ever been. Become a Trailkeeper and join in the work—get involved and give back today!

Here’s how you can help now: