Digging into the Wygant Peak Trail 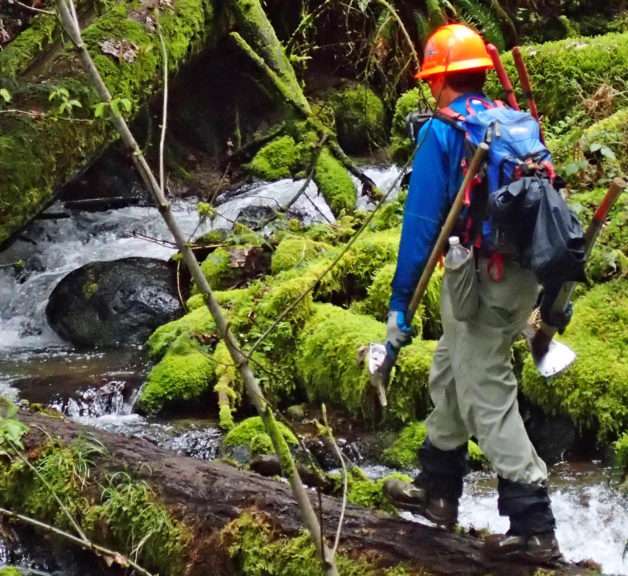 Nearly all of the trail lies within Wygant State Park, a stroke of luck for Trailkeepers of Oregon, since the Oregon State Parks folks are congenial trail project partners. State Parks was determined that the trail not slide into disuse for lack of maintenance, so a TKO group of us determined volunteers decided to get to work, beginning in March.

It is a mutt of a trail for the first mile. First, it follows a short section of the abandoned Columbia River Highway; then it dives into a canyon on a makeshift trail in order to avoid a washed-out section of road. It follows the old highway again for a short distance, heads into steeper terrain for an ungainly climb past a whisper of a waterfall, and then rises to a ridge looking into the Perham Creek canyon. Here, the trail changes from makeshift to genuine—wide, with a moderate gradient and well designed switchbacks. And it continues that way to the summit. 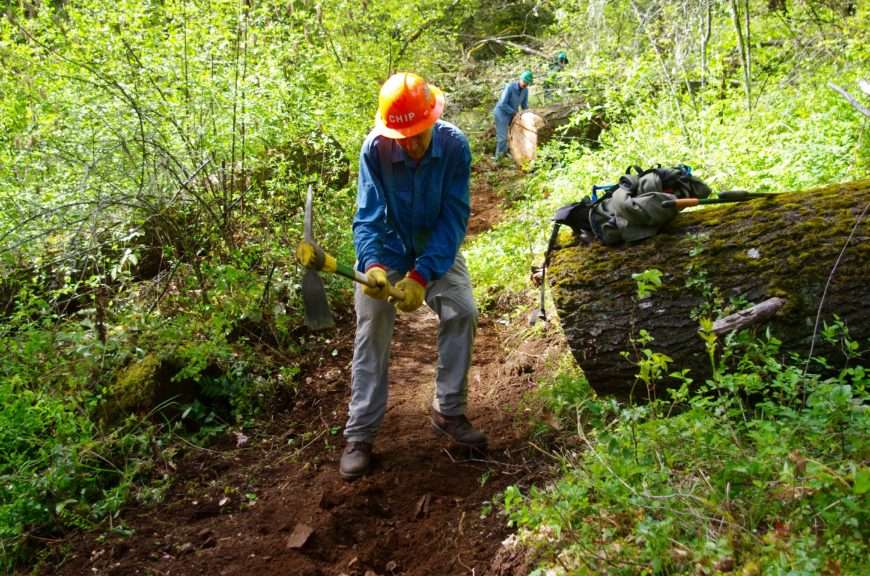 Our strategy for refurbishing this trail is to complete current work by the end of June, budgeting our time so we tackle the primary issues first and postponing any refinement to another time. For a trail that hasn’t had any significant maintenance for decades and has a less-than-ideal layout in the first mile, we were forced to revisit our tactics as work progressed and as we found out more about what was beneath the trail surface.

Getting rid of the severe outsloping has turned out to be the greatest of these tasks. The outsloping is a result of soil and rock sloughing onto the trail from steep upslope areas. Digging deep into this material and sending it off downhill is the obvious solution, but we hadn’t counted on such a tough mesh of roots tying it all together. And this type of clay and rock sets up into a sturdy matrix. The poison oak roots are the toughest of the roots to unearth and also the most hazardous. More than one of us has ended up at the doctor’s office begging for Prednisone after recklessly rooting around and acquiring a rash. 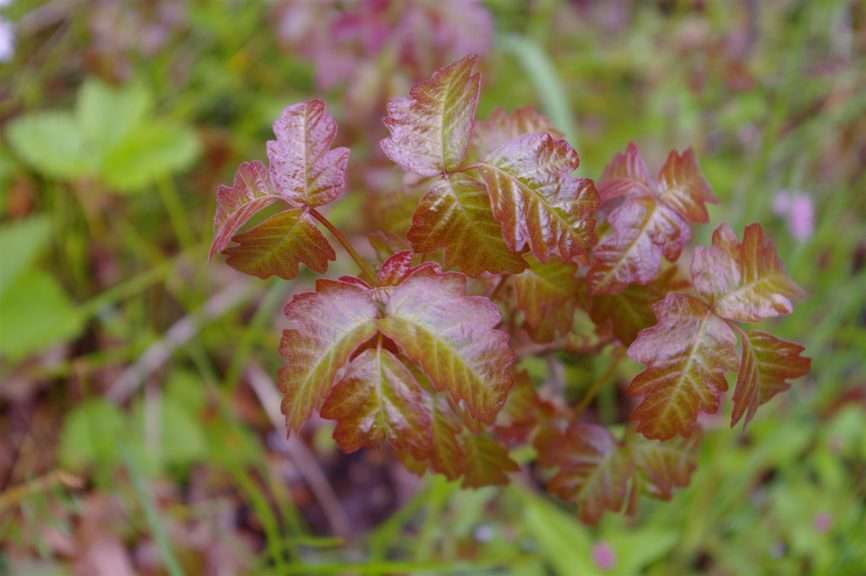 Poison oak (leaves of three) on the Wygant Trail. (Photo by John Sparks)

Another critical maintenance task we have taken on is cutting back the poison oak stems that lurk to the side of the trail in certain sections. During one recent work party, I stared down a section of dense poison oak and proclaimed that we would jump ahead and continue where the threat was less. My star volunteer, the bloke who breaks pick mattock handles in his enthusiasm to root out vegetation, was one of those who had ended up with severe poison oak rash the week before, so it was mostly about my attempt to avoid mutiny. We may end up classifying that skipped section as “rustic” and conveniently forget about it.

As we continue to work on this trail, we’ve learned about its origin and the history of the area. The trail was included with land that State Parks acquired through purchase and gifts between 1933 and 1978. The story of the trail got lost along the way. Old maps, water rights records, written history, and photographs have helped reconstruct the history, and the original geometry of this old trail has also yielded some clues. 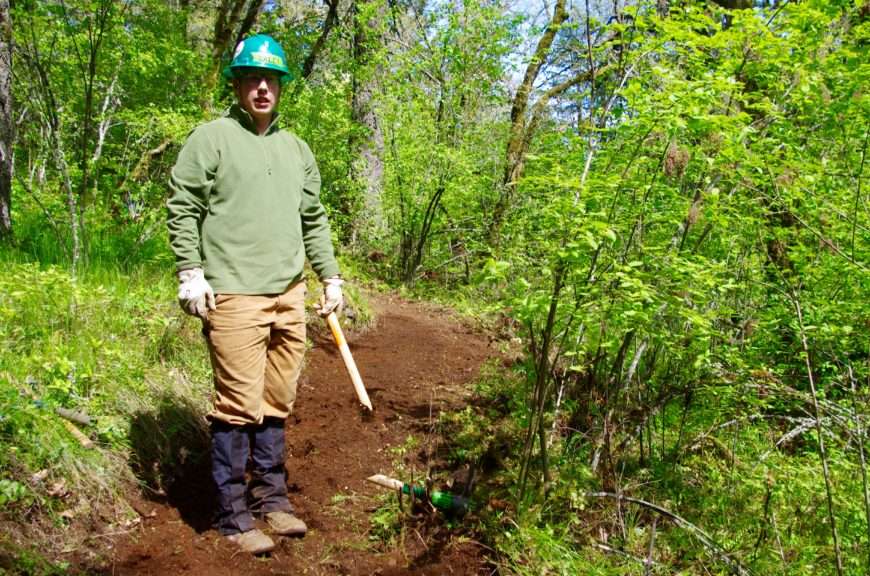 That first mile of trail, where it follows the Old Columbia River Highway and dives in and out of small canyons, is occasionally bordered by patches of English ivy and stone foundations that date back to just after the Old Columbia River Highway was completed in 1915. The area boasted a small sawmill and a summer house built by a wealthy Portland family. The house was later repurposed into a roadhouse, complete with small cabins and a small store. It’s anyone’s guess whether Prohibition-era beverages were sold out the back door.

Once the route reaches Perham Creek, the trail changes character. If you ignore the encroaching brush and a trail surface bloated with raveling soil, you can see evidence of a high quality trail. Amply wide in spite of steep-sloped sides, the original trail’s gradient rarely exceeds eight percent and has well-placed switchbacks. It continues this way to the summit. 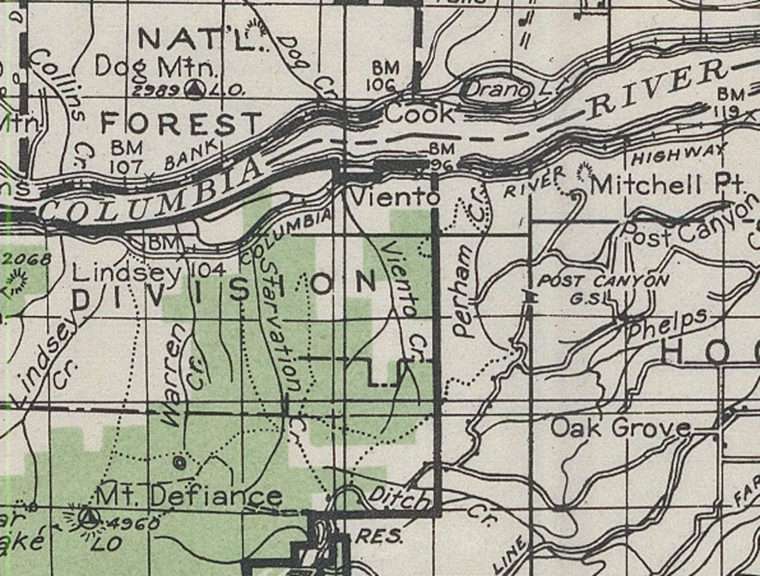 The 1939 USGS topo map more or less shows the old Wygant Trail: It’s the dotted line south of Drano Lake, following Perham Creek and then veering to the west. (Photo courtesy of US Geological Survey)

An examination of old US Geological Survey maps of this area shows no trail to Wygant Peak before 1980. The alignment of the trail on the 1980 map is similar to its current alignment. However, a trail to Wygant Peak does show up on a 1939 US Forest Service map, although alignment of this, and adjacent trails, are sketched with neither detail nor accuracy. The year is significant because it falls within a window when many of the other classic trails first appeared in the Gorge. These were the trails built by crews of the Civilian Conservation Corps (CCC) working out of Cascade Locks during the Great Depression.

The Wygant Peak Trail may not have been high on a priority list, unlike the trail following Eagle Creek further to the west, with its spectacular canyon of deep pools and high waterfalls. Yet the Wygant Trail has all the hallmarks of other high quality trails built by the CCC during that era: The ample width, moderate gradient, and well-placed switchbacks speak to its pedigree.

The trail once ended with expansive views of the Columbia Gorge east and west. Now the trail terminates in a grove of Douglas fir trees whose age suggests that they didn’t exist 80 years ago. From the peak, a game trail along a gentle ridge to the west will put you in a large meadow void of trees. Look to the west and you will realize what might have inspired the original trail designers to persist until they reached the top of Wygant Peak. 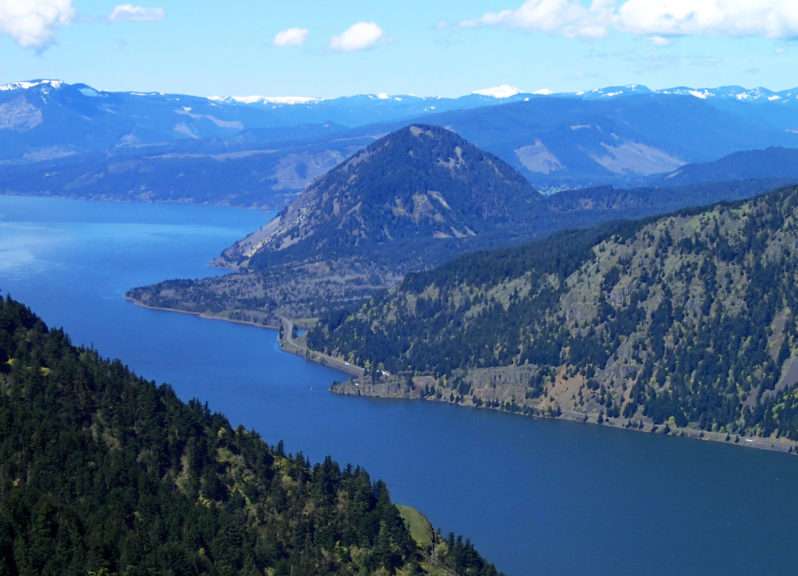 The view from the meadow below the Wygant Peak summit west to Wind Mountain. (Photo by Chip Andrus)

What other tales do the trails of the Columbia Gorge have to tell? Some of those stories have been compiled by Tom Kloster on his WyEast blog. Scott Cook’s Curious Gorge blog offers additional trail stories about the Gorge, such as this one about Coopey Falls. The Oregon Hikers Field Guide offers a description and topo map of the Wygant Peak Hike.

As we go about refurbishing the tread of a trail, we’re not only building on its history, but we are keeping its history alive. We’ve scheduled work parties for the Wygant Peak Trail into the month of June. You can join us in restoring this classic by signing up at TKO’s Trail Stewardship page.