Bull of the Woods Lookout Hike Includes Views and History

By Cheryl Hill, Board Member, Trailkeepers of Oregon

The extremely dry summer of 1910 made for a bad fire year. Three million acres burned in the Big Blowup in Idaho and Montana. Numerous fires burned in Oregon, including one that burned 60,000 acres in what is now the Rogue River-Siskiyou National Forest. After those fires the US Forest Service began installing a network of fire lookouts and guard stations so that fires could be spotted early and put out immediately. This network expanded greatly during the 1930s with the help of the Civilian Conservation Corps. They built many lookouts as well as the trails that led to them. 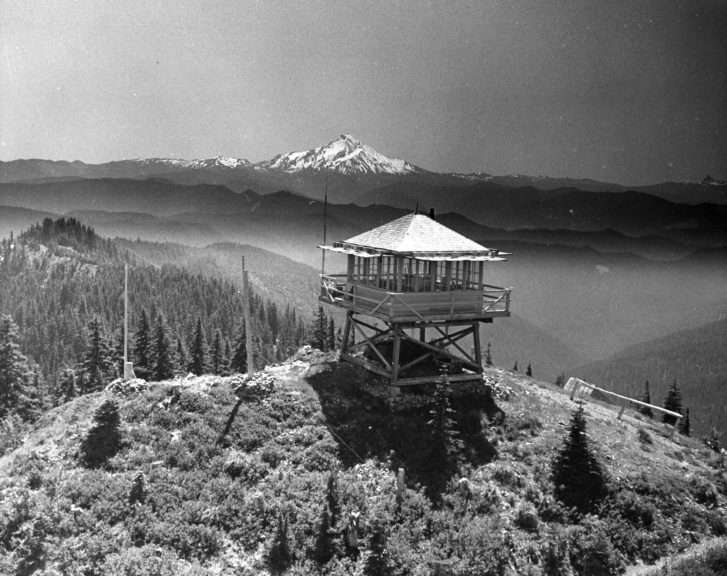 The Bull of the Woods lookout and Mount Jefferson. (Photo courtesy of US Forest Service)

However, lookout use started declining in the 1950s as aerial detection from planes and helicopters increased. Worried about liability issues if visitors were to become injured exploring the abandoned lookouts, the Forest Service started removing many of them. Oregon once had over 800 lookouts; today less than 170 remain and only about half of those are staffed. The number of standing lookouts decreases every year as the structures fall victim to Mother Nature, wildfire, or dismantling by the Forest Service. At some lookouts, human fire-spotters have been replaced with remote cameras.

The Mount Hood National Forest has been home to over 80 lookouts in the past century. Only seven structures remain standing and the Bull of the Woods lookout is one of them. The 10-foot-tall lookout was built on the site in 1942, replacing a 1928 lookout. It was regularly staffed until 1964, then intermittently staffed with volunteers into the mid-1980s, and it still stands. In 1984 Congress designated the Bull of the Woods Wilderness, which today includes 36,869 acres, including the lookout. 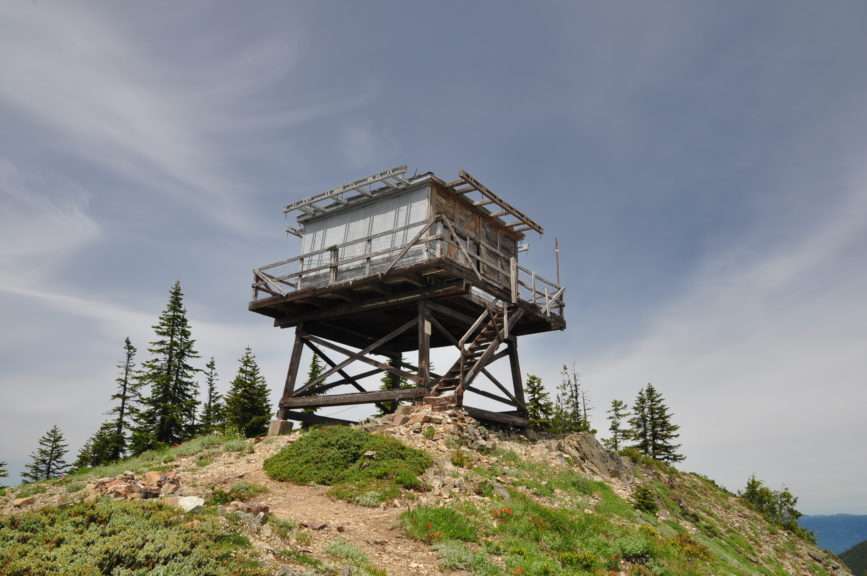 Bull of the Woods lookout in 2014. (Photo by Cheryl Hill)

Former lookout Bud Unruh describes his experiences at the Bull of the Woods lookout (you can read more of his account on TrailAdvocate.org):

What was it like to be on a back-country lookout in the ’40s? If you were assigned to “The Bull,” you hiked 16 miles from the end of the road to the lookout. After the packer unloaded your personal items and a month’s supply of grub, he was gone and there you were, alone for at least two months of the fire season. You would probably see one more person, the packer about August 1st with more grub supplies, and then again in early September to move you out.

Each lookout and Guard made up a grub list to last a month. The order was then placed by phone to Estacada, and delivered to Three Lynx Power Plant where a FS person from Oak Grove drove the seven miles on the very primitive one-lane (pipeline) road and picked it up.

Don Allen of the Sand Mountain Society has a personal connection to this lookout since his father worked there. He described one of his father’s experiences to me in a personal e-mail:

My father staffed that lookout in the summers following his junior and senior years in high school (1958 and 1959). There is a fire scar still visible along the trail where he was initial attack with an axe, Pulaski, shovel, and crosscut saw. It was pretty good-sized, but he was able to singlehandedly line it and contain the lightning fire which ran a few hundred yards and stopped at the ridge. As I recall, there were a number of lightning fires going on the forest from that storm, and Bull of the Woods was so far back that he never got reinforcement. But he was able to report the fire as “contained” by dusk.

The fate of this lookout is uncertain. In the past the Sand Mountain Society (SMS), an Oregon nonprofit, has helped preserve the lookout as part of their larger mission to preserve Forest Service lookouts throughout Oregon and Washington. In 2005 SMS and volunteers with the Passport in Time program (a preservation program of the Forest Service) worked on the lookout. However, further restoration efforts have been complicated by the fact that it stands in a designated wilderness. 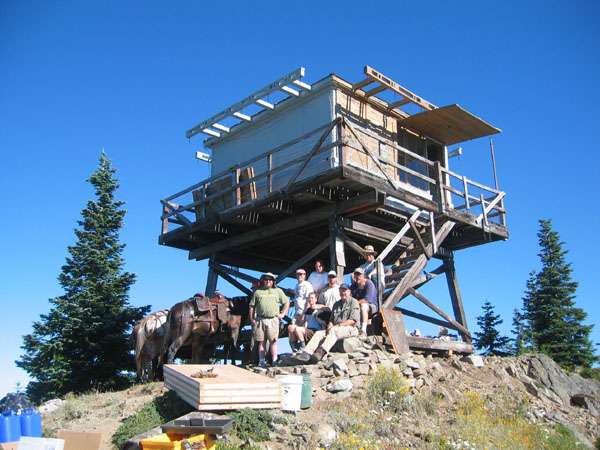 Passport in Time volunteers performed restoration work at the Bull of the Woods lookout in 2005. (Photo by Don Allen)

For now, though, the lookout makes a perfect destination for a summer day hike. This 7.5-mile loop takes you past two lakes. In early summer you’ll see a variety of wildflowers (and mosquitoes) and later in the summer you can feast on huckleberries. The incredible views from the summit include Mount St. Helens, Mount Rainier, Mount Adams, Mount Hood, Mount Jefferson, and the Three Sisters. Definitely save this one for a clear day.

To learn more about the Sand Mountain Society and how you can help, send a message to Don Allen.

Cheryl Hill: cheryl.hill@trailkeepersoforegon.org. Cheryl Hill is the author of Fire Lookouts of Oregon.