As we were finishing a Washington Trails Association Saturday work party in a Vancouver park recently, I found myself commissioned to take down a cedar that had snapped off about 12 feet from the ground.

It was angled at about 30 degrees with its far end suspended between two trees, creating a concern that local children would try to walk up the trunk and get hurt. Our afternoon project of taking down the cedar illustrates how safety determines the technical decisions in cutting a suspended tree.

A project as dangerous as this requires a team with some experienced members. As a certified “B” level (intermediate) sawyer, I can lead a three-person team and cut fallen trees with a two-person crosscut saw. To fill my team, I recruited Gabe Smith, a very experienced “C” level (advanced) sawyer who had with him a Silky, a long-handled pruning saw with a very sharp 24-inch blade. To round out the team, we asked a member of the neighborhood association to join us. 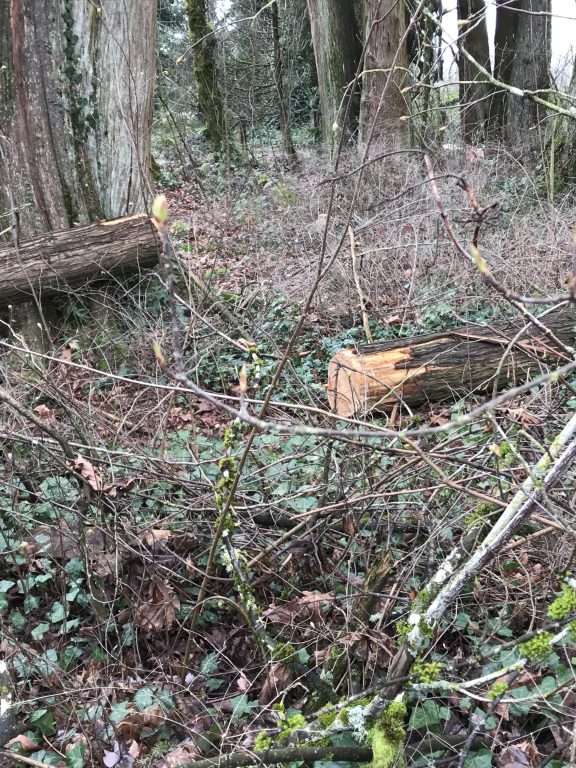 The distance between the two sections of the log after being cut. (Photo by Elaine Keavney)

As we walked to the tree we developed a plan, a necessary step for a safe cutting project. We were looking at a very dangerous cut, with three different binds—a top bind, a side bind, and an end bind, plus a cut above our heads. Top bind occurs when a log is suspended at the ends and sagging in the middle like a hammock. The top fibers are pinched—called “compression”—while the bottom fibers are stretched—called “tension.” Side bind occurs when a log is bent around other trees or rock, pinching the inside of the curve and stretching the outside. End bind is caused by gravity pulling the log toward the downslope end. And who wants to be under a log when it falls? Thus, the long-handled saw, to keep us away from danger.

We needed safe escape paths away from the cutting area, so we began removing the considerable amount of brush at our feet. As we removed the brush, a dozen or so of the day’s volunteers gathered to watch. Because of the potential movement of the log once it was cut, I asked them to remain on the road behind us and not to come any closer

We began by cutting the top of the log, which was just over six feet off the ground and about 14 inches in diameter. As the saw disappeared into the log, Gabe inserted our first wedge to hold open the kerf—the channel made by the saw as it cuts—so we could continue sawing further into the log without pinching the saw. 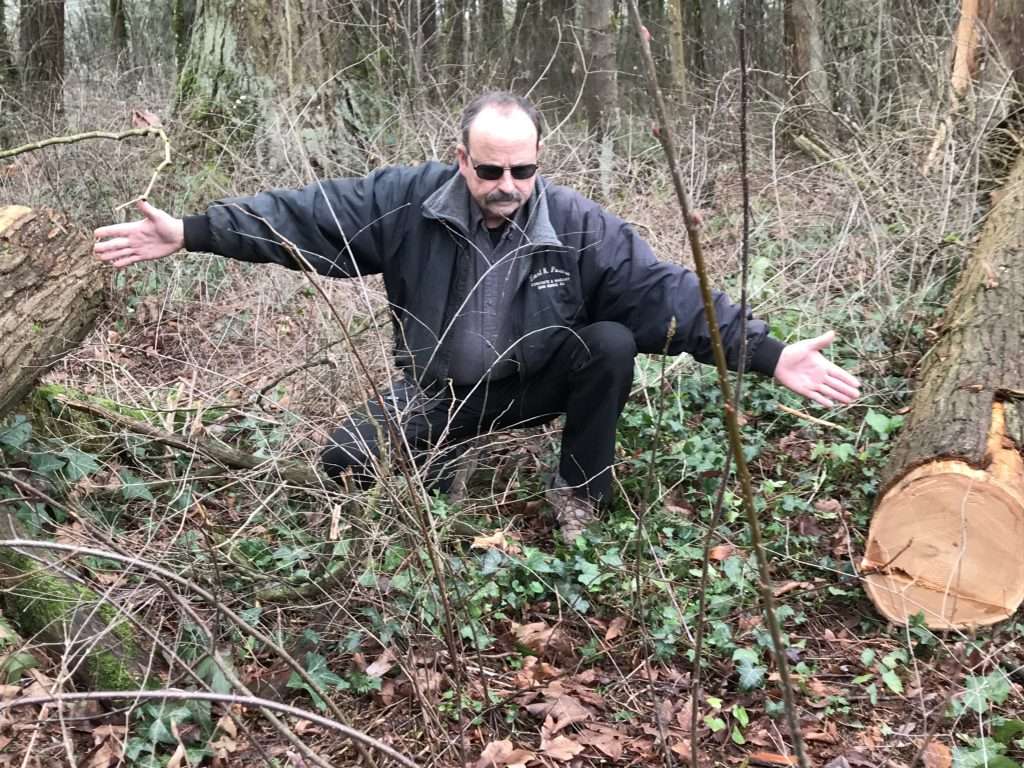 Another view of how far the logs separated due to the stress. (Photo by Elaine Keavney)

I explained our plan to the group watching behind us. We expected the large end on my right to fall straight down. But we expected the left half to move, to rotate counterclockwise with a lot of force and hit a large tree six feet away. We hoped the rotation would then allow it to fall free to the ground. Everyone was advised to move behind me on the road and to my right, to the “safe” end of the log.

We continued sawing and added a second wedge on the near end of the log to keep that side of the kerf open. We switched to underbucking—sawing from the bottom—and offset our saw a quarter of an inch to the left of the top cuts to protect the saw when the right end of the log dropped. I prepared for the final cut and asked the crowd to be quiet so we could listen to the tree. Three strokes later it began to “pop” as the stretched fibers snapped apart. The greater the tension, the louder the pop. Everybody could hear the pops. A moment later, the release was dramatic. The right end fell straight down, as expected. The left end hit the tree in front of us with a loud smack and then fell to the ground, releasing one of the strongest side binds I have ever witnessed.

A dozen volunteers got to watch a very technical and potentially dangerous cut, and a new potential sawyer was safely coached through the process by a very experienced “C” sawyer.