Amanda’s Trail and the Forced Relocation of Oregon Peoples

Sometimes a trail is not just a trail. On Cape Perpetua, the Amanda’s Trail, which runs two and one-half miles from south of Yachats to the CCC-constructed stone shelter up on the cape, holds two tales worth the telling. One is the lengthy, complicated and bureaucratic process around creating a hiking trail where none existed before; the other brings to light a grim chapter of Oregon history when native peoples were forced to relocate to lands remote from their ancestral homes. 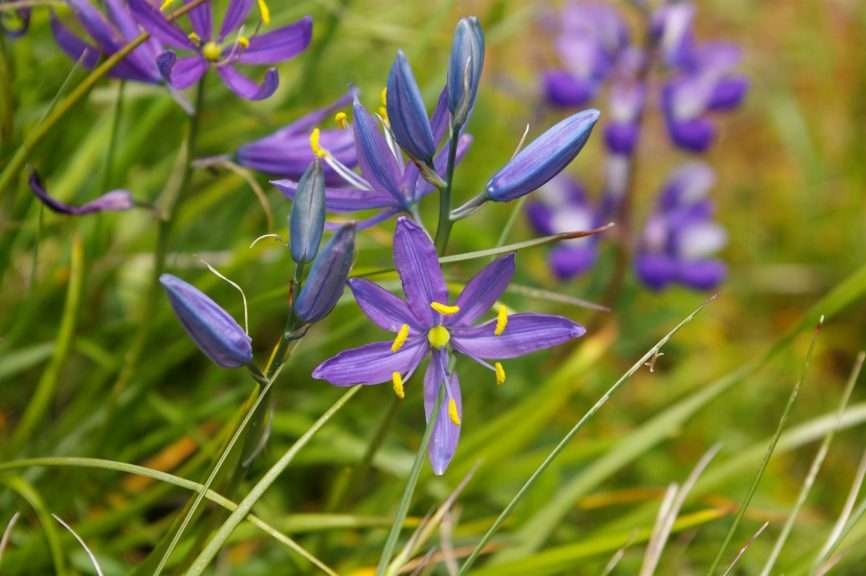 Camas blooming at the top of Cape Perpetua. (Photo by John Sparks)

The Cape Perpetua Scenic Area of the Siuslaw National Forest hosts a network of hiking trails that take visitors to the rocky shoreline, into the deep recesses of the spruce forest, and up to the stone shelter and overlook above the cape’s steep slopes. Loyd Collett was trail planner for the Siuslaw in 1984, and he had one more trail to build, a connection from the stone shelter down to Yachats which would also be part of the Oregon Coast Trail. The trail was plotted out, but then plans were shelved because the proposed route dumped hikers onto Highway 101 at a place with no verge; between here and Yachats was a stretch of forested private land. In his planning, however, Collett had already decided to call the path Amanda’s Trail after reading about a native woman who had been forced to relocate to the Alsea Subagency in the Yachats area from her home near Coos Bay. 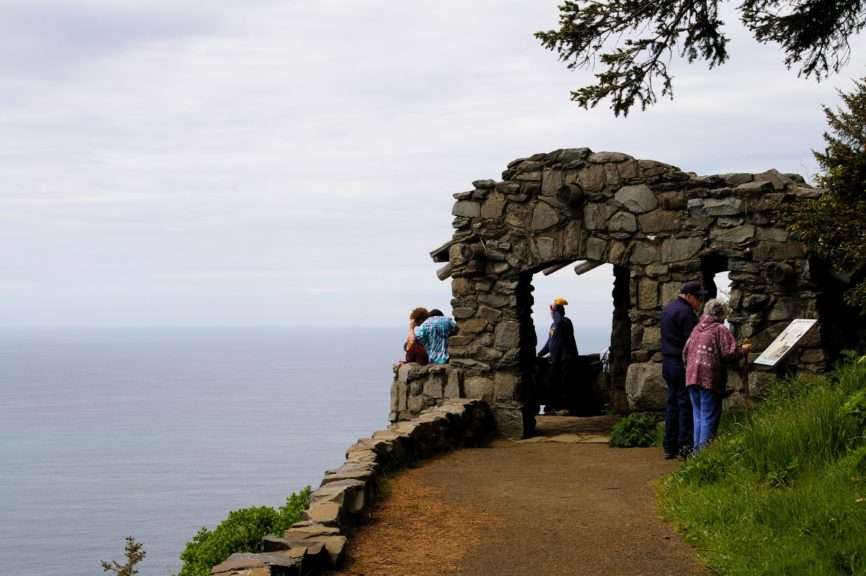 Enter the trail angels. In 1986, a Minnesota couple, Joanne and Norman Kittel, purchased the acreage along Highway 101. One of their desires was to host a section of the Oregon Coast Trail through the property. By this time, Collett had moved on to other things, the national forest had run out of funds, and the Kittels turned to Oregon State Parks for help. Even though the Kittels had been willing to grant a permanent easement from the beginning, it took ten years for the project to be completed. Job Corps students constructed the trail section on national forest land. Joanne Kittel herself found volunteers from Yachats to build the trail across her property. During trail construction, several archeological sites were discovered and, after enduring much red tape, the Kittels got a conservation easement declared. In 1998, the footbridge over Amanda Creek was built during a single weekend by Siuslaw National Forest staff, Oregon State Parks, Job Corps students, and Yachats volunteers.

There still remained the problem of connecting safely to Yachats. Eventually, the City of Yachats received a matching grant to build a one-mile connector that mostly parallels Highway 101 until it reaches Yachats Ocean Road. It wasn’t until 2006 that Joanne Kittel met Loyd Collett, who then informed her of the origin of the trail’s name. A small statue representing Amanda was placed in a ferny grotto near Amanda Creek. In July 2009, twenty-five years after Loyd Collett first conceived of the trail, a formal dedication brought together members of the Confederated Tribes of Coos, Lower Umpqua and Siuslaw Indians, the Confederated Tribes of the Siletz, and citizens of Yachats. Many of the latter had never known the truth about the Alsea Subagency which preceded their community. Now every New Year’s Day, a Peace Hike from Yachats to the Amanda statue takes place. Nature has also played a role in this trail’s saga. In December 2015, a storm caused a debris slide on Amanda Creek, burying the grotto and statue. Six months of trail reconstruction ensued. A new Amanda statue and a memorial bench now stand near a replacement footbridge. 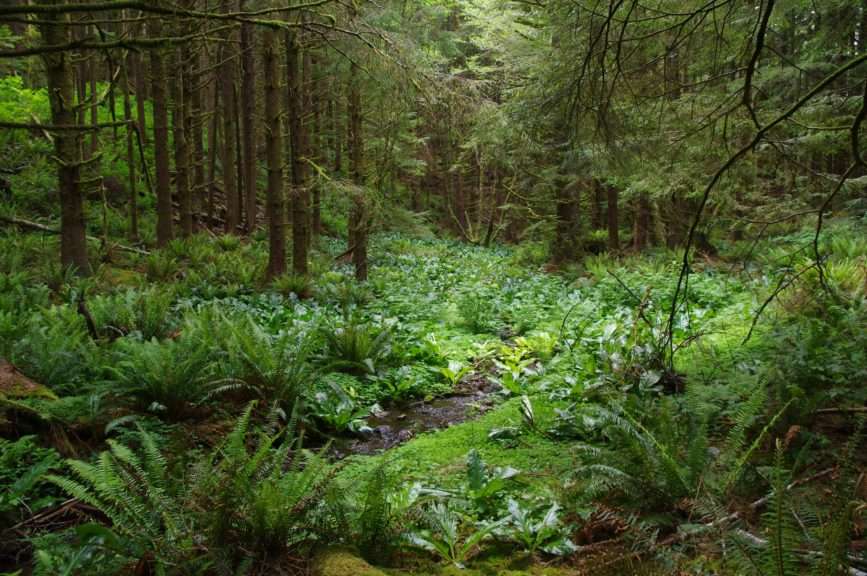 Near North Cape Creek on the Amanda’s Trail. (Photo by John Sparks)

And so to Amanda’s story. What little we know of her is recounted in the annotated diary of one Corporal Royal Augustus Bensell of Fort Yamhill, published as All Quiet on the Yamhill: The Civil War In Oregon. The Oregon Coast was beginning to see an influx of settlers: farmers in the north and gold prospectors in the south centered on the Rogue River. In 1855, some years before Bensell’s assignment, President Pierce, at the instigation of Joel Palmer, the Superintendent of Indian Affairs, had signed an executive order establishing the huge Coast Indian Reservation, a tract of land stretching one hundred miles from Cape Lookout in the north to the Siltcoos River in the south and twenty miles inland (the reservation concept ignored the original treaties with some of the tribes in question). Four military camps, Fort Hoskins, Fort Yamhill, the Siletz Blockhouse, and Fort Umpqua, were set up to police Indian activity. In all, twenty-seven native groups representing distinct languages and dialects were brought together, those already residing there now dealing with the newcomers. They were expected not only to coexist, but also to adopt European methods of settlement and take up agriculture. Most groups got all of about $2.50 per head per annum in government assistance. 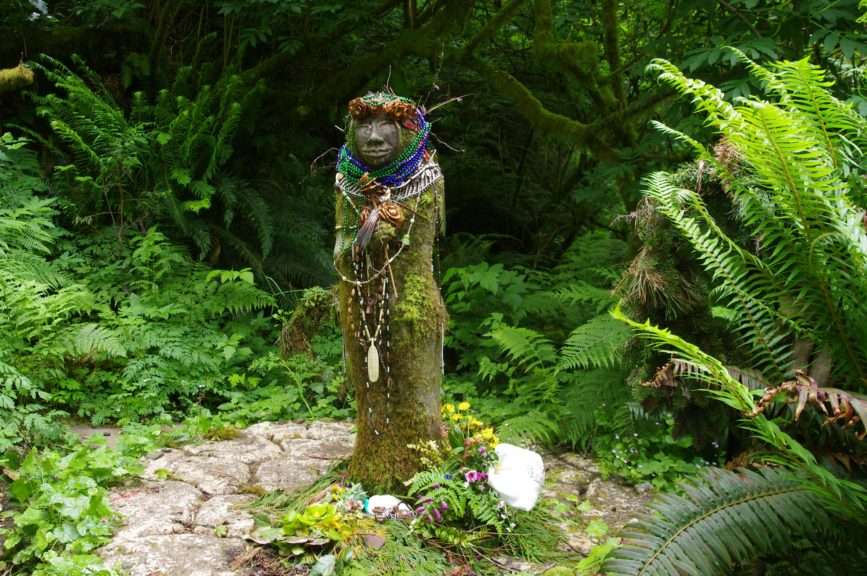 The first statue of Amanda in its grotto. (Photo by John Sparks)

Not surprisingly, a drift back to ancestral lands commenced almost immediately. Outside the reservation, Indians could find paid employment; in addition, members of southern groups hankered for traditional hunting and foraging grounds. Soon, the powers-that-be were bent on rounding them up. Thus, in April and May of 1864 came the expedition out of Fort Yamhill, led by Lieutenant Louis Herzer, Company D, 4th California Infantry, “in quest of a band of Indians that have left that place.” Indian agent Amos Harvey of the Alsea Subagency was to join them. By Bensell’s account, elaborated in the rank chauvinism of the time, the detachment “caught” forty-six Indians in the vicinity of Coos Bay, with the soldier lamenting the local loggers’ relations with Indians: “Nearly all are married to Squaws or else have a written obligation that will marry rather than allow the Ind Agt to deprive them of their concubines. They conceal the Indians, warn them, and otherwise enhance the difficulties of catching the red devils.” Bensell then describes an “old and blind” woman named Amanda De Cuys, who had been living with a white farmer and had by him a daughter, then perhaps eight years old. Despite this association, Amanda was seized, and the march northwards to the Alsea River, at present-day Yachats, commenced. 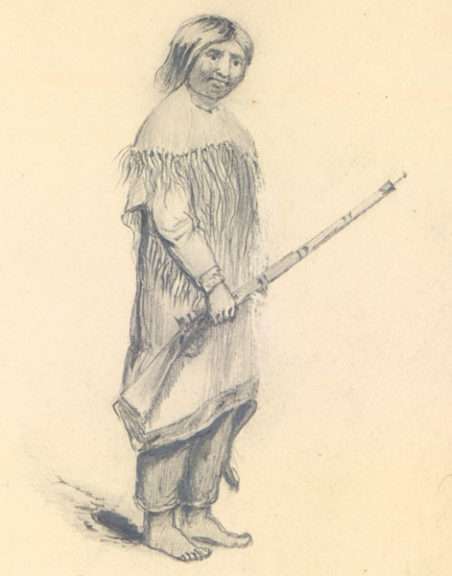 Sketch of an Umpqua Indian by Alfred Thomas Agate. (Image in public domain, from US Exploring Expedition, 1838 – 1842)

And a trying journey it was. Many of the women and children in the party dropped of exhaustion at times. Relations between Lieutenant Hertzer and Subagent Harvey, who was supposed to provide for the Indians’ daily needs, became fractious. Bensell’s patience ran out: “Harvey expects the Blind to see, the lame to walk, and all Siwash to subsist on nothing.” On the last day, the party negotiated the basalt chasms at Cape Perpetua, “wicked looking places” where “Amanda who is blind tore her feet horribly over these ragged rock [sic], leaving blood sufficient to track her by. One of the Boys led her around the dangerous places. I cursed Ind Agents generally, Harvey particularly.” And then Amanda, blind, bloody, and now childless, leaves the historical record forever. 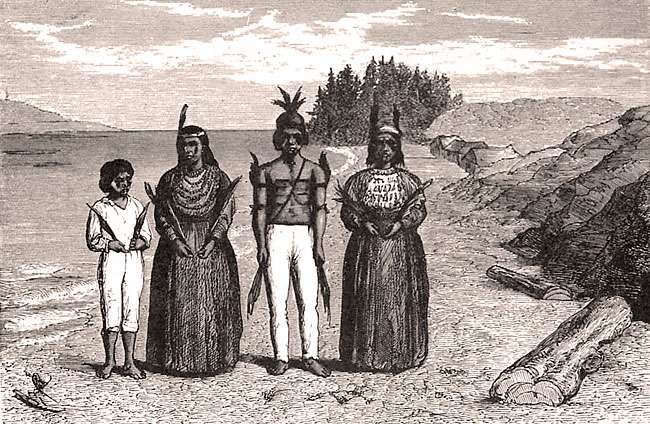 The Coast Reservation soon ceased to exist. In December 1865, a major section around Newport was removed (Royal A. Bensell became one of its first white inhabitants). In March 1875, two other vast tracts were opened to settlement. In 1892, the area, now the Siletz Reservation, was reduced further reduced from its original one million acres to 46,000 acres, with other coastal Indians concentrated in the Grand Ronde Reservation. The 1954 Western Oregon Indian Termination Act put an end to both reservations as well as all federal services. It took over two decades of agitation for the Siletz Confederation to be reinstated in 1977 and the Grand Ronde Confederation in 1983. The Amanda’s Trail thus commemorates not just the blind Coos woman who is mentioned in a corporal’s diary, but the systematic annihilation of cultures and ways of life. In a small way, it is these lost heritages that this path through the coastal woods invites us to reflect upon.

Beckham, Stephen Dow. The Indians of Western Oregon: This Land Was Theirs. Coos Bay: Arago Books, 1977.

Bensell, Royal A. All Quiet on the Yamhill: The Civil War In Oregon. Edited by Gunter Barth. Eugene: University of Oregon Books, 1959.

Wilkinson, Charles. The People Are Dancing Again: The History of the Siletz Tribe of Western Oregon. Seattle: University of Washington Press, 2010.