After the Fire: Mika Barrett on Fighting Invasive Plants

The 2017 Eagle Creek Fire in the Columbia Gorge cleared the ground of vegetation in many places and opened up the canopy, inviting colonization by any species of plant able to establish itself in the ash-rich soil. In the aftermath of the fire, Friends of the Columbia Gorge have trained and sent out many volunteers to remove invasive plants and help native species reestablish themselves.

Mika Barrett, stewardship volunteer coordinator for Friends of the Columbia Gorge, talked with Trailkeepers of Oregon about efforts to control the spread of non-native plants in the Gorge. Responses have been edited for clarity and brevity.

In the world of weeds, it’s all about priority. Working with the land manager for a particular area, we identify “ecological game changers,” those non-native plants which severely outcompete native vegetation and change the forest floor. The invasive species of concern post-fire are mostly the species that were of concern before the fire, such as false brome and garlic mustard. Before the fire, land managers worked primarily on game-changing species that could thrive in the shade of an old growth forest, but now land managers are including more sun-loving species, since the fire removed the trees that cast shade. We’re especially concerned about woody species and those that can colonize quickly, such as nonnative blackberry, Scotch broom, and English ivy. Our stewardship volunteers have primarily been removing seven invasive plants:

East Multnomah Soil and Water Conservation District has been doing limited weed work in some parts of the Gorge for many years, and these efforts have been ramped up after the fire. They are working with plants such as garlic mustard (Alliaria petiolata), spurge laurel (Daphne laureola), and shiny geranium (Geranium lucidum), to name a few.

“What’s the problem with pretty plants?” people ask. Well, they alter a familiar sense of place. They degrade water quality and soil quality, and can be poisonous to animals. Invasive plants have not adapted to this region for hundreds or thousands of years in a particular ecosystem, so they lack natural predators to help keep their growth in check. As a result, they have the tendency to quickly colonize an area and create a monoculture. By crowding out native vegetation with one plant species, invasive plants threaten the forest’s biodiversity. Biodiversity is crucial for many reasons, such as ensuring available habitat and forage for wildlife. For example, having a variety of flowers blooming at different times throughout the year provides pollinators with food throughout the season. Invasive plants can also shade out native seedlings, which could result in fewer trees. In riparian areas, less shade leads to warmer water temperatures, which is harmful for fish and aquatic animals. Lastly, some invasives such as English laurel and garlic mustard are allelopathic plants, meaning they produce biochemicals that hinder germination and survival of neighboring plants, including natives.

Around Multnomah Falls we’ve ripped out English ivy. What we couldn’t get to has been sprayed. At Bridal Veil Falls and Ainsworth Campground, we’ve lopped Himalayan blackberry below the leaf level. At Ainsworth, native trees had been planted, and blackberry has been crowding them out. After we pulled and lopped, we contacted the East Multnomah Soil and Water Conservation District, who came out and sprayed the rest. On Larch Mountain, we’ve pulled herb Robert and wall lettuce. In the fire zone, it’s mostly herb Robert. Along the Pacific Crest Trail near Dry Creek Falls, it’s blackberry, English ivy, and tree ivy. At Devil’s Rest, we’ve pulled groundsel, which is poisonous to animals. 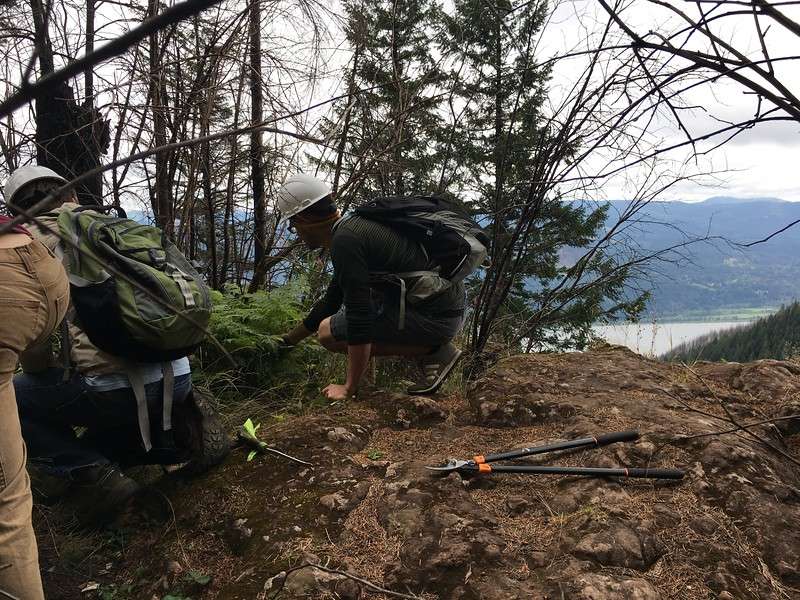 We use what’s called “Best Management Practices” developed by the Columbia Gorge Cooperative Weed Management Area (CWMA), a network of public and private land managers and owners who are working collaboratively to manage invasive plants. Best Management Practices highlight the phenology of the plant, considering how it reproduces and what stage of its lifecycle it is in. We don’t want the infestation to get worse. We ask, How does the plant spread—through tap root or seed? Do you pull it out? Mow it? Do you pull it and drop it, or do you need to pack it out? For instance, near Angel’s Rest, herb Robert—“Stinky Bob”—we can pull and just drop on the ground when it’s in its rosette stage, in its first year. In its second year, with seeds, though, we must pack it out since it spreads by seeds.

We also work within an Integrated Management Approach, which involves selecting from a range of possible control methods to match the management goals for each site. Some of the steps in this approach:

After ripping out English ivy at Multnomah Falls, we returned this December for a native planting event. To help ensure that the English ivy does not reestablish at this restoration site, we’ve backfilled the open area with native vegetation and will maintain the site in future years. Volunteers helped plant thimbleberry (Rubus parviflorus), salmonberry (Rubus spectabilis), dull Oregon grape (Mahonia nervosa), and tall Oregon grape (Mahonia aquifolium). Some of the volunteers who helped with the planting had also participated in the ivy removal this past spring and shared with me how the experience of seeing this project from inception to completion was rewarding. 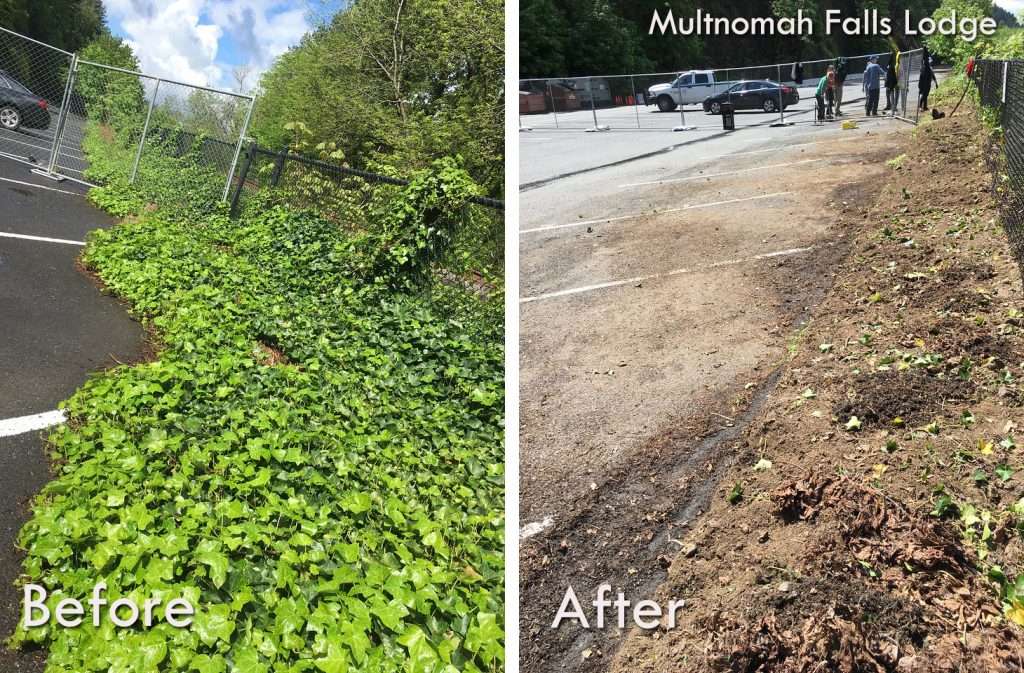 The roadside at Multnomah Falls Lodge before and after volunteers pulled English ivy. (Photos by Mika Barrett)

Though our volunteers only manually remove plants, we also consider what the next type of management after our efforts will entail. For example, to get rid of Himalayan blackberry, you ideally need to remove the entire root system and bag out the seeds. For smaller infestations and while the soil is soft, we can dig out the root systems. However, for larger infestations, if the land manager plans to have someone apply herbicides and if the soil is too hard from a dry season, then our volunteers will chop the canes down as the initial step before an herbicide treatment. We will also go back for several years to chop the canes down below the leaf layer so that over time the plant will need to extract energy from its root system due to the lack of leaves and will eventually die. 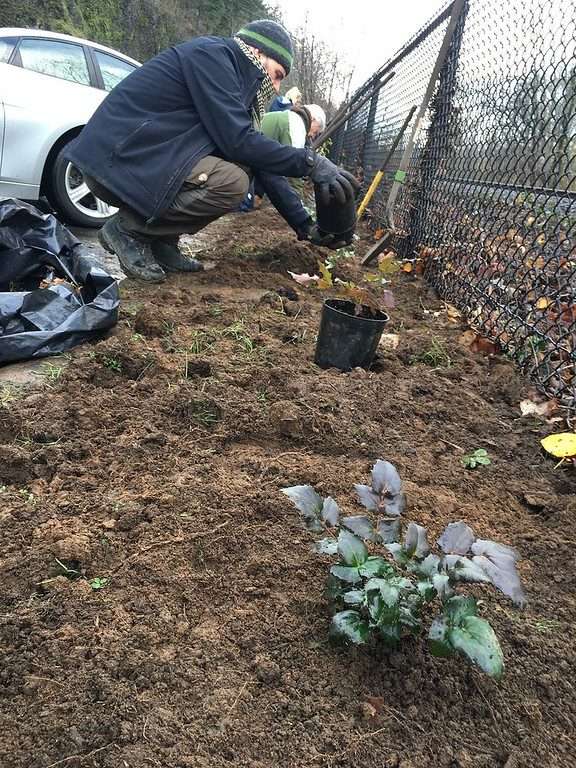 Volunteers planting native species in December at Multnomah Falls where English ivy has been removed. (Photo by Sam Garr)

In partnership with the US Forest Service and Oregon Parks and Recreation Department, we’ve prioritized trailheads and the first half-mile of trails for invasive plant removals. People are unknowingly one of the primary vectors introducing invasive plants to new areas—from invasive seeds hitching rides on their boots, dogs, and car tires—so we are prioritizing areas where most people are found, which is along trails. Safety is our number one priority for all stewardship work parties, so we don’t stray more than five feet away from a trail and we don’t work along steep slopes. Our volunteers donate their time to make a positive impact and to have fun, so we try our best to avoid dangerous situations.

Dealing with invasive plants is both a multi-faceted and a multi-year process. Most plants require us to hand-pull for several years because of how they spread and how long their seeds remain viable. For example, herb Robert seeds may be viable for five or more years, whereas Scotch broom seeds can remain viable for more than 60 years. Besides the seeds’ viability, we know we will have to hand-pull or chop down infestations for many years before an area is restored. 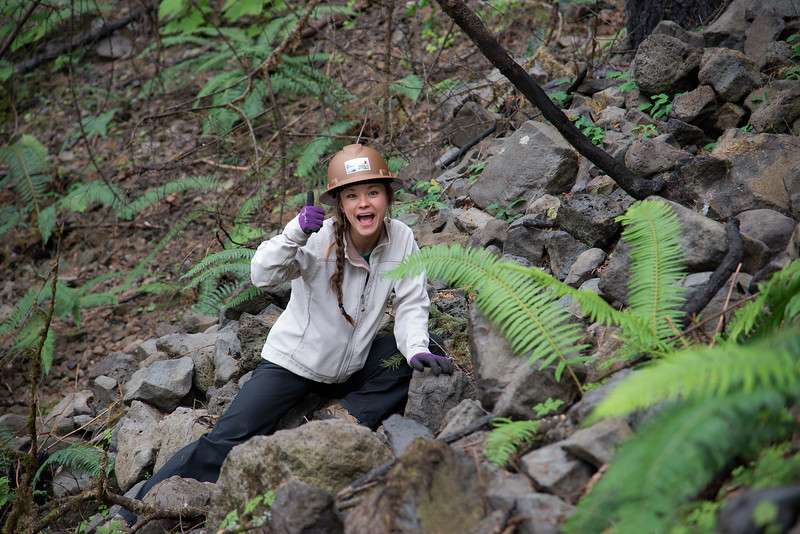 I tell volunteers to “Come clean and leave clean.” Hikers can simply brush their boots when they go out hiking. Most people think the boot brush is used to scrape off the mud from their shoes after hiking, but its intended purpose is to remove invasive seeds before heading onto your favorite trail. Last spring a volunteer and I cleaned over 15 boot brushes on both the Washington and Oregon sides of the Gorge and collected the debris. We’ll do the same again this year and would love to work with a volunteer who has space to germinate the seeds so we can see which seeds are brushed off at the different trailheads. At the end of March, Friends of the Columbia Gorge will be hosting a “Boot Brush Kickoff” event in the Gorge. Besides their boots, hikers should also clean their cars, gear, and dogs before entering a natural area. 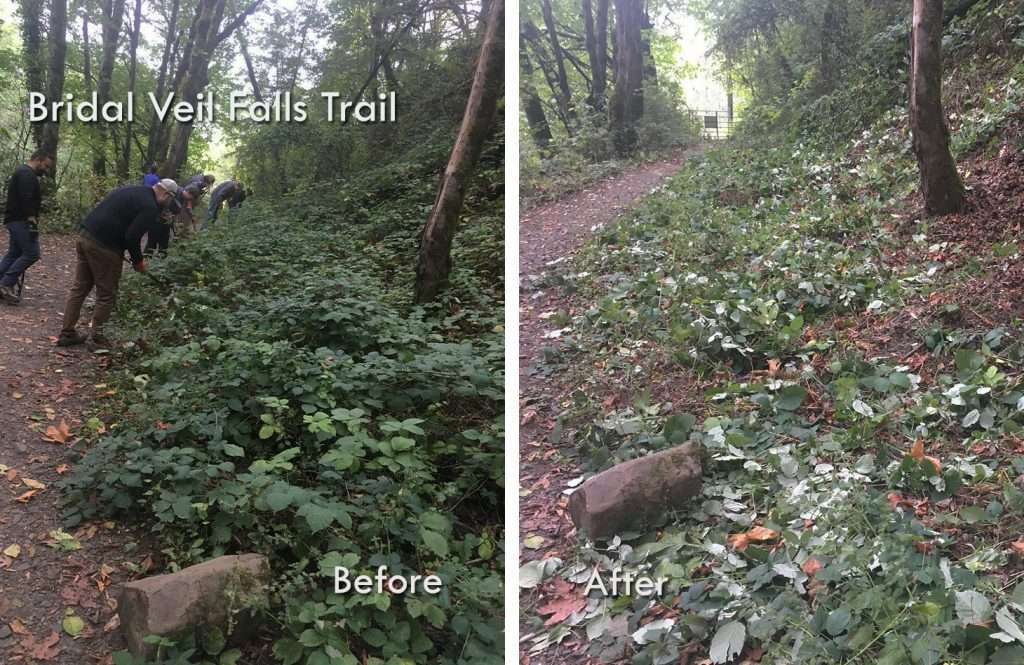 The Bridal Veil Falls trail before and after volunteers pulled Himalayan blackberry. (Photos by Mika Barrett)

Hikers who are adept at botany can report invasive species they’re found along trails by logging onto the Oregon Invasive Species Online Hotline or iMapInvasives. iMapInvasives offers a free mobile app that works with a cell phone’s camera and GPS to precisely document invasive species’ locations, making for easy reporting of infestations.

Hikers can also pack out all food scraps. We’ve found tomato plants growing along the Larch Mountain trail! Maybe someone left behind a tomato slice from a sandwich, or tracked in tomato seeds on their shoes? Hikers are also welcome to join one of our stewardship work parties to help combat the spread of invasive plants. We host work parties through the year on weekdays and on weekends.